Today 14th June 2019 started off with my waking up unusually late at 10:00 am for me even after hearing my alarm set at 6:45 am and it’s TGIF a working weekday. But the day quickly became a super magical, manifestation day to say the least.

A extremely strong and powerful thought came that my waking up very late today was MEANT TO BE, if not the Universe may not be able to “arrange” and “predestined” a seemingly simple event of my finding a RM50 banknote right directly on my pathway in a super-crowded Pavillon Kuala Lumpur Mall.

Let’s put into a HUMAN perspective.

If hypothetically speaking, a big team was instructed to organize and arrange a series of happenings today in order for me to find a RM50 banknote, it would have been an almost impossible task as I was very unpredictable and I was moving a lot today.

But the above is a human perspective. The Angelic Realm works entirely differently for a series of events and people to happen.

One obvious analogy is using the Final Destination Film . In the horror film, props and actors must be carefully choreographed for a sequential and concurrent prop filming.

But in my case, it is “totally random” with only human beings and machines for Angels to play with, and timing is absolutely crucial for all random events to happen leading up to my picking up the RM50 banknote at precisely 8:45 pm. How is it humanly possible!

Firstly, I always begin my day no matter how late with roughly a 7 Minute SPIRI Consciousness Meditation. I would review my Whisperer’s Cards of yesterday (used to call it Magic Cards which I designed around 1994. There are powerful single words printed in small die-cut heavy white paper with no artistic design) and do a mental daily journal of lessons I learnt from yesterday in reference with the Whisperer’s Cards.

That’s because I finally gave the Triple Angels I’ve been working with a combined name:
The “LIBERTY” Triple Angels: Angel of Light, Angel of Truth, and Angel of Love. 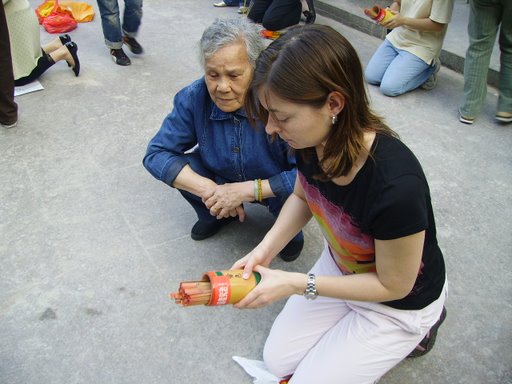 How the ritual works is like “Kau Chim”:
I move the cards from the lid to the box, and vice versa until only one card falls on the table. More than one fallen cards or cards fallen on the ground will be dismissed.

Kau Chim, Kau Cim (Cantonese pronunciation) , 求签( Mandarin pronunciation – Qiúqiān)，or Lottery poetry (simplified Chinese: 求签; traditional Chinese: 求籤; Sidney Lau: kau4 chim1), is a fortune telling practice that originated in China in which the querent (person asking the question) requests answers from a sacred oracle lot. The practice is often performed in a Taoist or Buddhist temple in front of an altar. Kau Chim is often referred to as Chien Tung or Chinese Fortune Sticks by westerners. In the US, a version has been sold since 1915 under the name Chi Chi Sticks. Kau Chim is also sometimes known as “The Oracle of Kuan Yin” in Buddhist traditions. It is widely available in Thai temples, known as Siam Si (Thai: เซียมซี). The similar practice is also found in Japan, named O-mikuji.

Below is today’s set of Triple Cards.

Notice the BLANK Whisperer’s Card. It’s usually going to be an exceptionally magical, serendipitous day ahead.

The day was very productive.
I had a long conversation with Eddie Lee who wanted me to headhunt 2 senior managers for LOVE 18 Hand-made Chocolates. We also talk about his pet project of a 16-day Law of Attraction Chocolate Box to attract anything in life (watch out for details of this new product).

After my conversations about the Law of Attraction Box, I decided to hand-write my manifestation of my 3 Wishes and call upon the Liberty Triple Angels to help me manifest my 3 Wishes in 3 separate, small pieces of paper – then folded the 3 pieces of paper and keep them safe inside my Angel Wishes Box (you can use any type of box for this ritual). I send those 3 Wishes as messages to my Angels.

Then I LET GO, LET GOD.
I let the Universe and the Angels do what they need to do help me manifest my wishes.

WARNING: You can’t just leave it to “the Grace of God”.
That’s why many PRAYERS DO NOT WORK because of people trying to “wait and see”, rather than go and make it happen, and God and the Angels will help them manifest their prayers). There also many reasons why many religious prayers do not come true.

You need to make SPIRI Conscious efforts to see people, go places, and make things happen along the way.

These are some of the critical steps and part of many Principles and Methods I teach in my Papillon-Butterfly Life-Changing Principles PowerWorkshop and DragonCEO & Self-Mastery Progam.

Anyways, the last 30 minutes before I found the banknote was quite intensive and fast-paced. I had to move from Pavillion KL to the nearest McDonald’s to charge my MacBook. Two days ago a security manager stopped me from using the wall socket in Food Republic in Pavillon KL.

I worked on my MacBook for an hour but the air conditioning was freezing cold. I asked the staff to put the 19C warmer but they refused and said it is not adjustable. It was so bad I had to stop suddenly and to walk back to Pavillon to continue my #Whisperings writings.

Just pass the iconic Pavillon Fountain at the front entrance, there right in front of me was a new RM50 banknote among a big moving crowd. Half a second earlier or later someone else would definitely had picked it up as it was so obvious a big size banknote which nobody can miss it. I went back within less than a minute to take a photo of where I found the banknote.

And it had to be a BIG Banknote like RM50 to be SPIRI Consciousness convincing – not a RM1 banknote.

What are the millions-to-one odds of finding a RM50 Banknote.

For me, I only won 2 lowest prize Hong Kong Jockey Club Mark Six Lottery (HK$20 twice consecutively) in my life out of a lifetime of buying Mark Six lotteries and spending tens of thousands of dollars over the years.

Even the every best Hollywood Crew CANNOT do what Angels such as the Liberty Triple Angels can do and are are capable of doing.

Then I went to Pavillon to write this article but my MacBook is nearly out of battery again. I took a risk (remember my today’s Whsiperer’s Card was “Risk-Taking”). So I follow my Angels’ guidance. I start charging my Mac.

Within 45 minutes a different Security Manager came over, moved the chair which I tried to hide the power cord. He confirmed seeing my power cord but instead just SMILED AND LEFT ME ALONE!

SUCH IS THE PROOF AND POWER OF MANIFESTATION & THE LAW OF ATTRACTION.

In future articles and public workshops, I’ll share with how YOU TOO can manifest for your dreams to come true.

I learnt The Power of Manifestation & Attraction from one of the World’s very best MANIFESTOR – my late wife Brenda José, and now my Twin Soul and Angel Brenda.