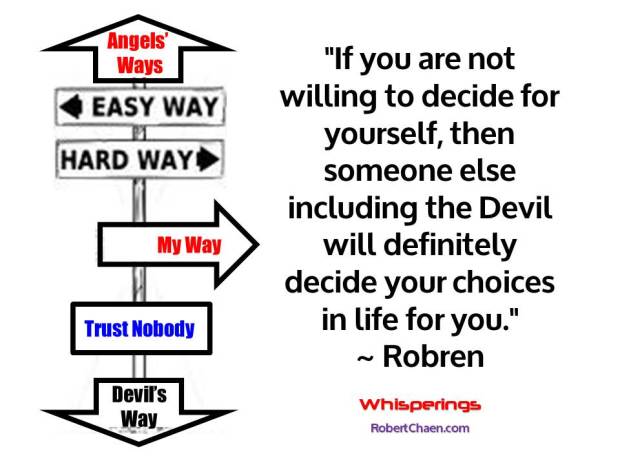 “If you are not willing to decide for yourself, then someone else will definitely decide your choices in life for you.”
~ Robren

If you are an adult, you should not trust anybody including your Dad, Mum, BFF, GF, BF, spouse, holy books, priests, boss, lawyer, because all human beings have selfish motives and hidden agenda; even if your Mum thinks she is giving you her best advice which sometimes will go against your core principles and dreams.

But if you not an adult, you will need to follow and listen to your parents, Sunday School and Primary School Teacher, priest, and your well meaning aunt – albeit listen objectively. Why?

Because your parents, teachers, and care-takers are responsible for your food and shelter, wellbeing, and hopefully character-building, and good positive education (compared to countless toxic, racist, sexist, religious mainstream education – see article below).

Read how Malaysia’s BTN is toxic, racist education by Professor James Chin:
The BTN teaches these Malay participants that the Malaysian Chinese (and non-Malays generally) are like “Jews” and that Malays must be politically supreme at all times. A recent exposé of internal BTN documents showed that BTN trainers were told to teach that racism is “good” if it promotes Malay unity. It even suggested that racism originated from the Islamic concept of asabiyyah, a positive idea that centered on brotherhood and formed social solidarity in historical Muslim civilizations.

Malaysia’s Wake-Up Call: The Dark Truth about Extremism and the 50,000 IS supporters in Malaysia

The 8 Life-Changing Principles I Learnt from Joseph DiGiovanna. There is NO such thing as get rich quick, NO “MIRACLES” of capital, marketing, religion, and anything in life.