Meet Melanie & Tobias, a Swedish travelling couple from “MT World”. They are strictly fruitarians. They mainly eat from Ah Wai SS2 durian store when they are in Kuala Lumpur. I introduced them to my good friend Ah Wai, the original Durian SS2 store owner. SS2 is a suburb in Petaling Jaya, 20 minutes drive from Kuala Lumpur city center.

The most durians ate between the two of them in one sitting: 30.

Ah Wai, Owner of SS2 Durian: Listening to the Sound of Durian Shaking

Q&A Interview with Ah Wai, “The King of SS2 durians”

Q1. What are your favorite durians?

A1. Musang King and Tracka

Q2. How many durians you sell a day?

Q3. What do you do with the durians that were opened but were rejected by customers?

A3. Sold to makers of durian cakes.

Q4. Where you get your durians from?

A4. Bentong, and Pahang state.

Q5. Is it true you can die drinking alcohol/ beer with durian?

A5. It’s a myth, and a grandmother’s scare story.

Q6. Do you eat durians every day?

Q7. Do women fall in love with you because of your unique status as “The King of SS2 durians”?

Q8. Is the cashier your wife?

A8. No. I have a wife and a girlfriend… (Ah Wai gave us a cheeky smile. We dare not ask him what does that mean…) 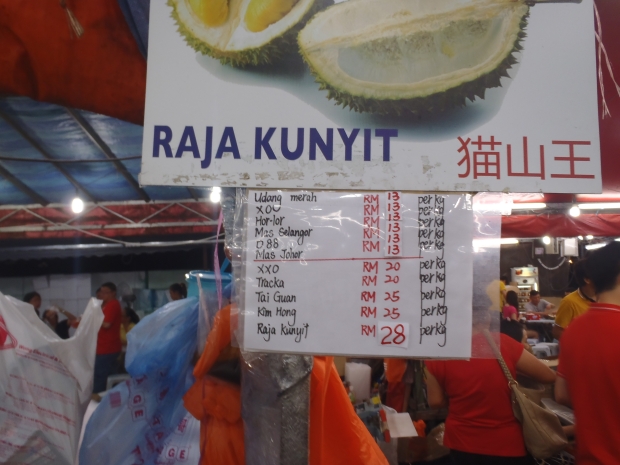 RM15 eat all you can pile in front, RM9 pile in the middle, and RM20 the third line further behind. 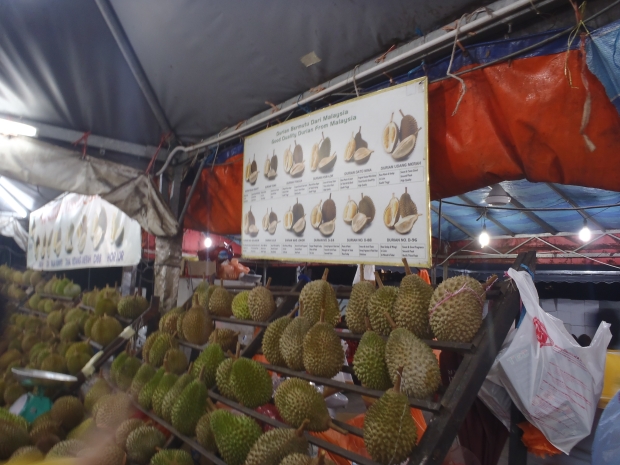 RM20 eat all you can (except Musang King)

RM15 eat all you can – least popular

[ ] Udang Merah (“Hung Har” in Cantonese, the no.1 favorite in Penang)