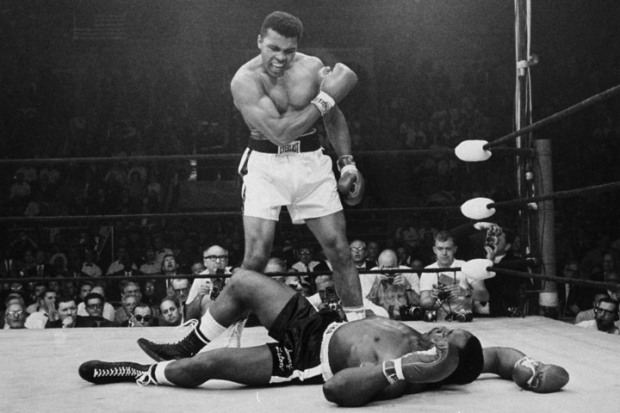 ‘It’s not bragging if you can back it up.’

‘Live every day like it’s your last because someday you’re going to be right.’

‘He who is not courageous enough to take risks will accomplish nothing in life.’

‘It’s lack of faith that makes people afraid of meeting challenges, and I believed in myself.’

‘Float like a butterfly, Sting like a bee, your hands can’t hit, what your eyes can’t see.’ – Prior to his fight against Foreman in 1974.

‘If my mind can conceive it, and my heart can believe it – then I can achieve it.’

‘I’m not the greatest; I’m the double greatest. Not only do I knock ’em out, I pick the round.’

‘To make America the greatest is my goal, so I beat the Russian and I beat the Pole. And for the USA won the medal of gold. The Greeks said you’re better than the Cassius of old.’ – He said this quote after he won the Olympic light-heavyweight gold medal at the 1960 Games in Rome.

‘A man who views the world the same at 50 as he did at 20 has wasted thirty years of his life.’

‘I done wrestled with an alligator, I done tussled with a whale, handcuffed lightning, thrown thunder in jail; only last week I murdered a rock, injured a stone, hospitalized a brick. I’m so mean I make medicine sick.’ – Ali said this before the historic Rumble in the Jungle match that took place in 1974 in Zaire against George Foreman.

‘I am so fast that last night I turned off the light switch and was in bed before the room was dark.’

‘Boxing is a lot of white men watching two black men beating each other up.’

‘Cassius Clay is a slave name. I didn’t choose it, and I didn’t want it. I am Muhammad Ali, a free name, and I insist people using it when speaking to me and of me.’

‘It will be a killer and a chiller and a thriller when I get the gorilla in Manila.’ – Ali said this before the historic and legendary ‘Thrilla in Manila’ match against Joe Frazier in 1975.

‘I hated every minute of training, but I said, ‘Don’t quit. Suffer now and live the rest of your life as a champion.’

‘Only a man who knows what it is like to be defeated can reach down to the bottom of his soul and come up with the extra ounce of power it takes to win when the match is even.’

‘There are no pleasures in a fight, but some of my fights have been a pleasure to win.’

I am the greatest, I’m the greatest that ever lived. I don’t have a mark on my face.’  – Ali said this after he beat competitor Sonny Liston in 1964.

‘At home I am a nice guy: but I don’t want the world to know. Humble people, I’ve found, don’t get very far.’

‘If you even dream of beating me, you better wake up and apologize.’

‘My way of joking is to tell the truth. That’s the funniest joke in the world.’

‘I am America. I am the part you won’t recognize. But get used to me. Black, confident, cocky, my name not yours. My religion, not yours; my goals, my own; get used to me.’ – Ali said this in 1970 when he was convicted of draft evasion.

‘The fight is won or lost far away from witnesses—behind the lines, in the gym, and out there on the road, long before I dance under those lights.’