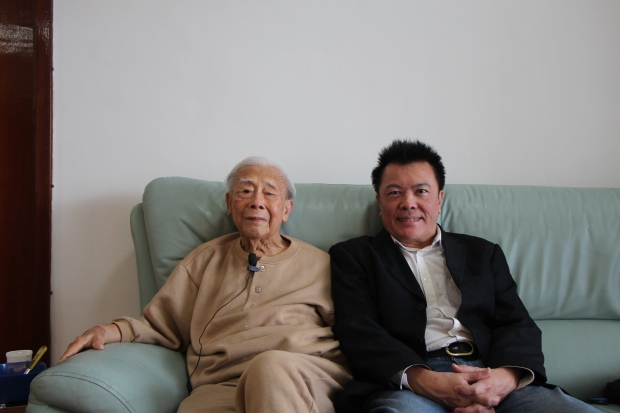 “I’m ready to meet God. Every day is a bonus!”, says my Dad. What it is like to face death so near?

My father was diagnosed on 13 November 2014 with acute myeloid leukemia by Dr Tong of Caritas Hospital, Hong Kong. The doctor doesn’t think he has much time left but obviously cannot say when. So my Dad is dying… from a slow death – from old age, a weakening heart, and acute leukemia. He can still talk and in fairly good spirits with some ups and downs. My family do what we can to comfort and encourage him.

I met my Dad in December, 2014. Medically the doctors are amazed that my Dad is still alive. I sense there is still more life in my Dad since Brenda sent me a sign: a fly sat on my hand for 20+minutes and did not fly away. Only when “it’s about time”, I’ll whisper to my Dad’s soul to cross-over.

I had previously asked my Dad what does he feel like to know he is way passed the average life span. He said he is ready to go. “I’m ready to meet God. Every day is a bonus!”.

I wonder what it is like to face death so near?

I wondered what Brenda felt when she was admitted to ICU, Ruttonjee Hospital on Thursday 19 December 2014. Within 24 hours she went into a coma as her organs failed from toxics seeping through a perforated intestines – due to suffering from Crohn’s Disease for 18 years. Although it was very sudden, I believed she knew that death was very near, and she wanted and was ready to cross-over.

Is there fear of death? How does a soul RIP?
Initially I’m sure that there is some extent of fear of dying. But eventually from observing and researching cross-cultures, most humans will realize that it’s time to go even if it’s only a split second awareness. At the time of crossing-over the soul knows and rest in peace i.e. rest in the Soul Universe. A soul becomes a “ghost” if one can’t RIP (What are “ghosts” will be another future article). Unless the soul wants to play a guardian angel role and give afterlife signs to their loved ones if they are open enough to accept the afterlife signs. Eventually the soul will be reborn in a pre-destined birthplace, time, mother, father, family – depending on the “soul eternal record and karmic accounts”.

Q. Am I ready to cross-over?
I’m ever ready. I still have worldly desires, career ambitions, human needs and wants – as long as I’m a human. However, I sense my time to cross-over is some ways away. When my time comes, Brenda will angelic soul whisper me to cross-over. As my Twin Soul she will be there to watch me cross-over. I fear nothing.

We come to this world empty.
We’ll leave this world empty.
Nothing we can bring to the other Spirit World except unsettled karmic accounts and the “soul eternal record” – for reincarnation, temporary guardian angel role, or nirvana rest for 1 to many lifetimes “break” from returning back to the physical world.

Read about “Soul Whisperer of Crossing-Over” in: What are “Twin Souls”?