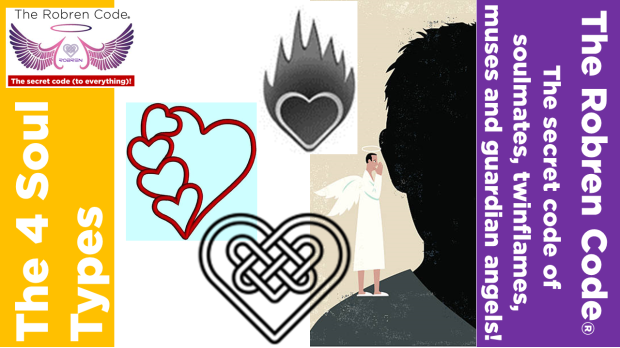 Today, we are exploring the key differences in a 9-Dimension Comparison between Soulmates, TwinFlames, TwinSouls,  plus bonus information about Angel Whisperers. This insight and research is from the last 8 years of angelic whisperings by Robren with his late wife and TwinSoul, Angel Brenda.

There is a possibility of meeting your SoulMates with 2 to more than 10 past lives together.

For TwinSouls it usually means at least 20 past lives together (not necessarily consecutive).

And for a rare few TwinSouls pairs, their past lives together is countless or even everlasting.

2. How many do you meet in one lifetime

For all 3 types it is mixed gender i.e. male or female. For TwinFlames it can be sexual or platonic.
And for TwinSouls, it is predominately spiritual.

For all 3 types, the relationship comes in many types such as a best friend, life partner, child parent, grandparent, sibling, rival, enemy, career or business partner.

For TwinSouls, the relationship type is predominately mission and vision-based, focusing on light over darkness. The TwinSouls go through The 7 Tests of Faith e.g. 1 see the other die, CDE (Cheating Death Experience), NDE (Near Death Experience), and The 9 Vices.

For Fallen TwinSouls, they have an evil mission say as a cult founder, focusing on darkness over light.

For SoulMates, after death they are likely to be your Guardian Angel but many are not aware of Afterlife Signs.

For TwinFlames, they are most likely to be your Guardian Angel or a Muse, who take care holistic needs of her/his TwinSoul (especially for the creative types).

For TwinSouls, the crossed over one will send countless Angelic Signs and act a Spiritual Muse, who fulfil the spiritual needs of  his/her TwinSoul.

The nature of SoulMates are a deep connection, with strong attraction and rejection, they can be a confidante, with special bonding, companionship, and serendipitous encounters.

For TwinFlames they have the deepest twin connection, with extreme highs & lows; Extreme attraction or rejection, If one is down, the other is down.

For TwinSouls they have everlasting twin connection, unconditional love, surprisingly they may have legendary highs & lows, they are ultra-intensive, but stick together through huge fights (compare one TwinSouls fight can destroy a normal SoulMate relationship). Miracles can happen.

The purpose for all 3 types is to settle past karmic debts/credits, can be a catalyst.

For TwinFlames, they complete each other, they fulfil each other’s needs, pleasure is powerful reward and motivator.

For TwinSouls they keep each other focused on the TwinSoul Mission.
Traumas and disorders can actually act a superpower to access the 7 Psychic Senses.

For all 3 types, some characteristics are ‘Partners-in-crime’, fulfilment, love, empathy.

For TwinFlames it can be most intimate, super-intensive, with ecstasy, passion and intense karma.

For TwinSouls their key purpose is recognition of being ‘chosen’ to establish a religion, cult, spiritual/political movement, or being a channel for angelic messages, with euphoria, deep spiritual purpose.

From the whisperings with Angel Brenda, it is most likely a Founder TwinSouls would have at least 30 lifetimes together before they have the religious alignment, maturity, trust and synergy. Our sense why there are so many new minor religions especially religious cults, is because the majority were/are Junior TwinFlames, not TwinSouls

Robren TwinSouls’ Purpose:
1. To establish the higher consciousness spiritual movement called Robrenism and Angel Lightberators.
2. To be the Angel Whisperer for Liberty Angels.
3. To bring liberty from the 22 human conditioning, and in the Multiverse.

Soulmates are souls who close to you for one or a few lifetimes, such as parents, siblings, spouse, best friends, relatives, colleagues, schoolmates, or career partners.

An Angel Whisperer is one who can sense and communicate with Angels (from ancestor guardian angels to archangels) through any one or all of the 7 Psychic Senses. An Angel Whisperer who is also a TwinSoul is extremely rare, one in 100-300 million.

TwinFlames have many lifetimes together and likely to be romantically linked or platonically linked, unlike TwinSouls who are spiritually linked.
Robren are TwinSouls of Robert & Brenda only, but they individually have multiple TwinFlames in different lifetimes.

● TwinSouls are different from TwinFlames primarily in role-playing.

● The key role of TwinSouls is establishing a religion, a spiritual movement, or being a channel for angelic messages. Robren play the later two roles.

From whisperings with Angel Brenda, all religions were established by Founder TwinSouls, and they were reborn in senior positions to sustain the religion.

For example, the Founder Soul of Christ entered the body-chariot of Jesus and established Christianity, later the Christ-Jesus TwinSouls reincarnated to sustain their religion as high-ranking officials as a Cardinal, a Saint, or even a Pope.

Similarly, the Founder Soul of Buddha entered the body-chariot of Prince Siddhartha Gautama, and became ‘enlightened’ and established Buddhism as Buddha-Guatama TwinSouls. Later the soul of Gautama reincarnated to sustain Buddhism as a high-ranking Buddhist leader, a Bodhisattva, Saint Josaphat, and Budai (Fat Buddha). The soul of Buddha manifested in many angelic forms such as Guan Yin, Avalokitasvara, etc.

Robert had deep insights into the workings of TwinSouls when he was the World’s Second Chinese Brahma Kumaris, from 1979 to 1989, who was the Co-Founder of Brahma Kumaris Malaysia, together with his physical eldest brother, Tom. He has written the world’s first BK memoirs ebook called “Brahma Kumaris Memoirs”: an account of the struggle to live an ultra strict celibate life as a virgin youth leader, while being tempted from all sides while working in the sexy, backstabbing, political world of advertising.

The Angel Whisperer who cracked The Angel Code, the secret code to everything.
Robren’s purpose is to establish the higher consciousness spiritual movement called Robrenism, to be the Angel Whisperer for @Liberty Angels (i.e. Angel Ai (Love), Angel Alitheia (Truth) and Angel Archangelus (Light) who are the strongest cluster of ArchAngels identified to be Michael, Gabiel, Raphael, Uriel and Metatron) and @Angel Lightberators, to bring liberty from the 22 human conditionings, and to inspire a Multiverse of abundance and a Metaverse & scam-free NFT eMalls build by youth & kids entrepreneurship.

https://tinyurl.com/Lightberators&nbsp; © Copyright 2022
Editor’s Note #3: Our fans are most welcome to quote freely from the vast resources, articles, and videos by Robren. We only request give due ownership credit whenever you use our materials, with or without written permission.

NEXT… The latest update on The 10 Dimensions of The Multiverse…
SOON… Full details of The 22 Human Conditionings…
…. Attracting Karmic Credits, and Repulsing Karmic Debts…

Editor’s Sidenote:
After 8 years of deliberate Whisperings and Past Life Meditation with Angel Brenda, Robren has identified 29 TwinFlames out of 300 SoulMates with past lives with Robren – 100% confirmed so far.

Half of these 29 TwinFlames, Robren is waiting for the right time to share with them.
Sharing the truth is an art, not a science. Not all can handle the truth.
There are a number of SoulMates, some who are alive and some who had crossed over, that still need much more past life meditation before Robren can confirm their TwinFlame relationship, in their natural timing.
And more confirmed TwinFlames are envisioned to appear soon, and in the future, some are clients, some were ‘enemies’, some are Dajis 狐狸精, some are Kitsunes, some were Ascended Masters, some were/are Fallen TwinSouls (brought to spiritual justice), some are Founder TwinSouls, while some will not be shared with them at all.

[] To help in the purpose, vision, mission, and principles of Robrenism, Lightberators, Spiritual Entrepreneurship, etc.
[] To reward or be rewarded with Good Karmic Credits.
[] To take care of the various holistic needs of Robren TwinSouls.
[] To be a Robren’s Mentor, a Catalyst, a Muse, or a Check & Balance Adviser; and vice versa.
[] To help and liberate ‘lost souls‘.

If you are one of those people who is a hopeless romantic who believes in eternal love, and you are willing to fight against the odds to be with your true love, then click and read this article below:

Characteristics of Twin Flames: 1 in 100,000 can be your Twin Flame