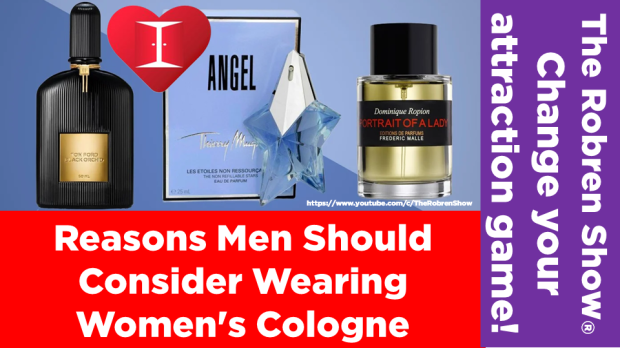 But what makes a male fragrance different than a female fragrance? It can’t be a lack of floral notes, because even ‘80s powerhouse fragrances like Guy Laroche’s Drakkar Noir and Christian Dior’s Fahrenheit contain jasmine and carnation in their notes. And if it’s not about so-called “feminine” notes, then why don’t men wear women’s perfume?

To understand the marketing side, you need a brief lesson in fragrances. The term “cologne” wasn’t originally intended to mean men’s fragrances. In fact, that’s a decidedly Western idea. In the fragrance world, all fragrances are called “perfumes.” “Cologne” or “eau de cologne” is actually a determination of the strength of the perfume; in this case it has much less perfume oil in it than perfumes do. Because men in the US were hesitant to wear perfume, marketers altered the meaning of the words and decided the word “cologne” would signify men’s fragrances, while “perfume” stood for women’s fragrances. As time passed, those words became firmly established by many to represent their new meanings.

Why is this knowledge so important? Because if you realize that early perfumers never originally planned to have separate scents for men and women, then maybe you’ll be more open to exploring the vast fragrance choices that have been marketed for women. While there’s been a rise in unisex fragrances, you don’t have to stop in the middle when women’s fragrances can have the right effect on you and the women around you.

If that’s not enough to convince you, take a look at the science of how wearing women’s perfume can influence the way women react to you. Consider this — you walk into a club and meet a beautiful woman. Naturally the music is loud so that if you want to have any semblance of a conversation you’ll need to get closer. Close enough that her perfume scent transfers onto your body. After that, you meet another woman and this woman smells the previous woman’s scent on you.

You might think that will turn her off, but according to results of a 2014 study published in Human Nature by Australian psychologists Ryan Anderson and Michele Surbey — women desire a man that is desired by other women. As I always say, our sense of smell is one of our strongest senses, so it’s one thing to see you talking to other women but smelling another woman on you will influence her brain more powerfully. Combine wearing women’s perfume with your sleek style and confidence, and then watch as women start taking notice.

With top notes that include a floral, black truffle you may be taken aback at first, but stay the course because this scent transforms into a decadent and creamy vanilla, chocolate blend that will be sure to capture the attention of beautiful women.
$150.00 at Amazon.com

Just as popular as its male counterpart, Angel Men, except that scent is infamous for a tar note that can overpower its caramel, chocolate deliciousness that women love on a man. Take the tar note out and you have Angel.
$98.00 at Amazon.com

This perfume is proof that a name is only a name. Though it opens with a powerful rose note, its seamless blend with patchouli, incense, amber, and musk make this Portrait of a Lady more a portrait of what a lady likes on her man.
$317.00 at Amazon.com

There are no boundaries when it comes to perfume. Find the scent that you like whether it is marketed toward men or women, wear it with confidence, and stand out from the men that prefer to smell the same as every other man.

The Robren Show: Change your attraction game!
The Law of Repulsion: Repulsion is the reverse psychology of attraction. It’s super-influential!
NFT eMall: Future-proof in your kid’s future!

Link to this article: https://tinyurl.com/WomensCologne