A Ukrainian mother had plans to change her life this year. Russian forces shot her as she cycled home.

Iryna Filkina had big plans for the year. She was turning 53 in April and planned to start focusing on herself after spending the past three decades working tirelessly and raising her two daughters between the towns of Bucha and Irpin, in the suburbs of Ukraine’s capital Kyiv.

Filkina signed up for a cosmetics course at the start of 2022 with local makeup artist Anastasia Subacheva, purchasing her first ever set of blush, eyeliner, and concealer, which she planned on wearing at an upcoming concert.

She even got a cherry red manicure for Valentines’ Day, drawing “a heart on her finger because she started to love herself,” Subacheva told CNN.

But her plans stalled at the end of February when Russia invaded Ukraine. Her daughters decided to cross the border into Poland, but Filkina stayed back to help people. She spent a week at Bucha’s Epicenter shopping center, feeding people who were sheltering there and cooking for the Ukrainian military, according to her daughter.

On March 5, Filkina tried to get a seat in one of the cars that was evacuating people from the shopping center out of the town. But when there was no room, she decided to cycle home.

One of Filkina’s daughters, 26-year-old Olga Shchyruk, said she begged her mother not to ride her black bike home that day. She asked her to take the train out of the city instead. 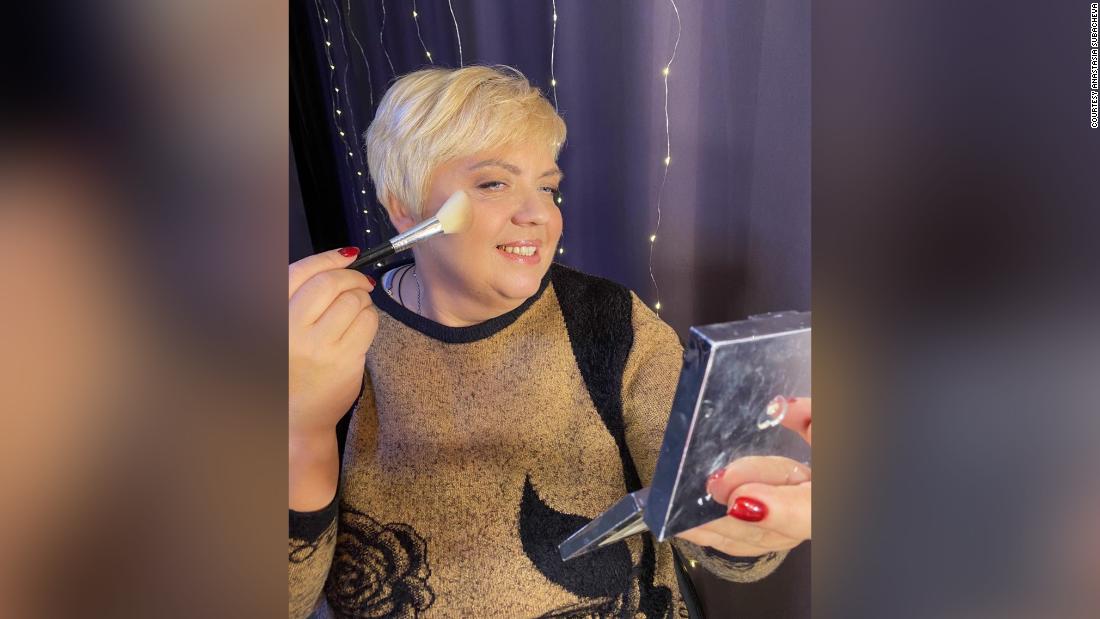 “I told her that it was unsafe there. Russia occupied the whole village — they killed people,” Shchyruk told CNN.

“Olga, don’t you know your mom? I can move mountains!” Filkina replied, according to Shchyruk, a child psychologist who was in Poland at the time helping other Ukrainian refugees.

It was the last conversation they had. Filkina never made it home that day.

Chilling footage shared this week appears to have captured the moment of Filkina’s death. A drone video taken before March 10 showed a person pushing a black bicycle onto Yablunska Street in Bucha before being gunned down by Russian soldiers. At least four puffs of smoke emit from a Russian military vehicle after the cyclist rounds the corner.

A drone video taken before March 10 captured the moment a person riding a bicycle is gunned down by Russian soldiers in Bucha, a town northwest of Kyiv. Video Source: Suspilne

A second video of the same street, posted to Twitter and geolocated by CNN, shows the body of a woman with a blue jacket and light-colored trousers sprawled alongside a black bike by an uprooted electricity pole. One leg is mangled. Her arm lies to the side. Burned-out and abandoned cars litter the street alongside ash and debris.

Further images of the scene, taken by Reuters, show a closer view of the woman in the blue jacket. A curled hand peeks out the sleeve, with cherry red nail polish, and a heart motif on one finger, shining through the grime and dirt.

As the image of that hand went viral on social media this week, both Shchyruk and Subacheva immediately recognized whose it was: Filkina’s. “How could a person not recognize the body of their mother?” Shchyruk said. 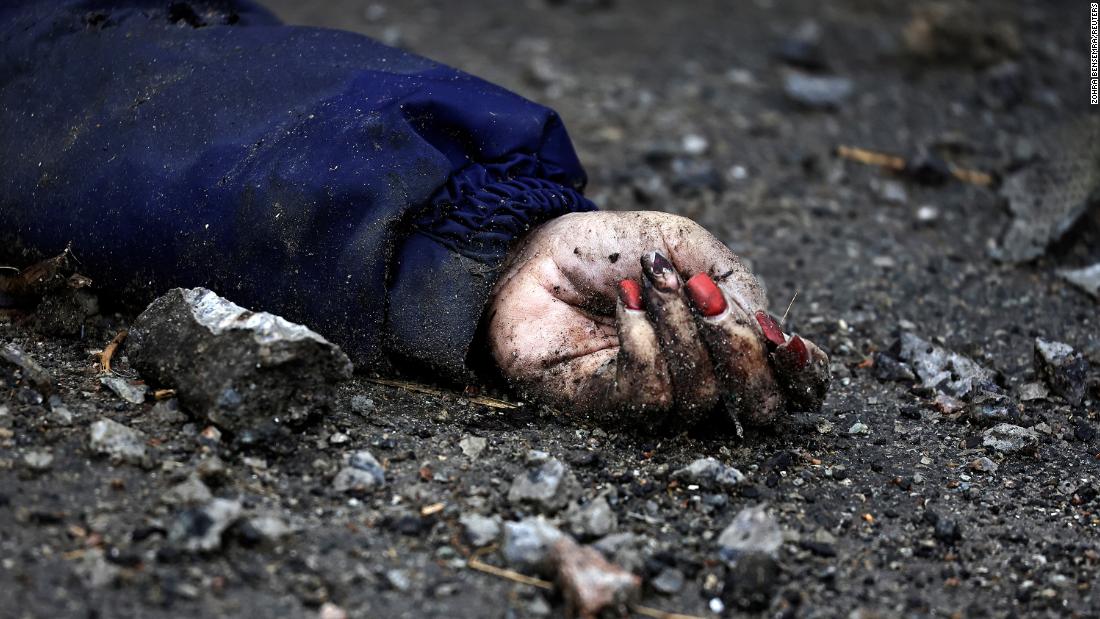 Subacheva began to compare photos she took of Filkina with the Reuters photograph. “This photo of her body and my own (pictures) of her manicure… I realized that this is the same person and I started to cry,” Subacheva said, adding that the last time she saw her was a day before the invasion began. “We need to realize that behind this picture of her hand stands a great woman.”

Known as “Mama Ira” to all her daughters’ friends, people adored Filkina’s propensity to nurture those around her. When Filkina saw the ocean for the first time in her life two years ago on a family trip to Egypt, “everyone in the hotel fell in love with her. They said, ‘Mama Ira, come back,'” Shchyruk said.

“All her life, she gave herself for others — (she) gave her life to the ambitions of other people,” Shchyruk said. It was after that trip to Egypt that her mother decided she “wanted to follow her own passions,” she added.

That is why Shchyruk refused to believe that her mother was dead, despite the Ukrainian military telling the family on March 5 that she had died. The military said it would be impossible to retrieve her body, as a Russian tank was positioned nearby.

CNN has reached out to the Russian Ministry of Defense for comment. 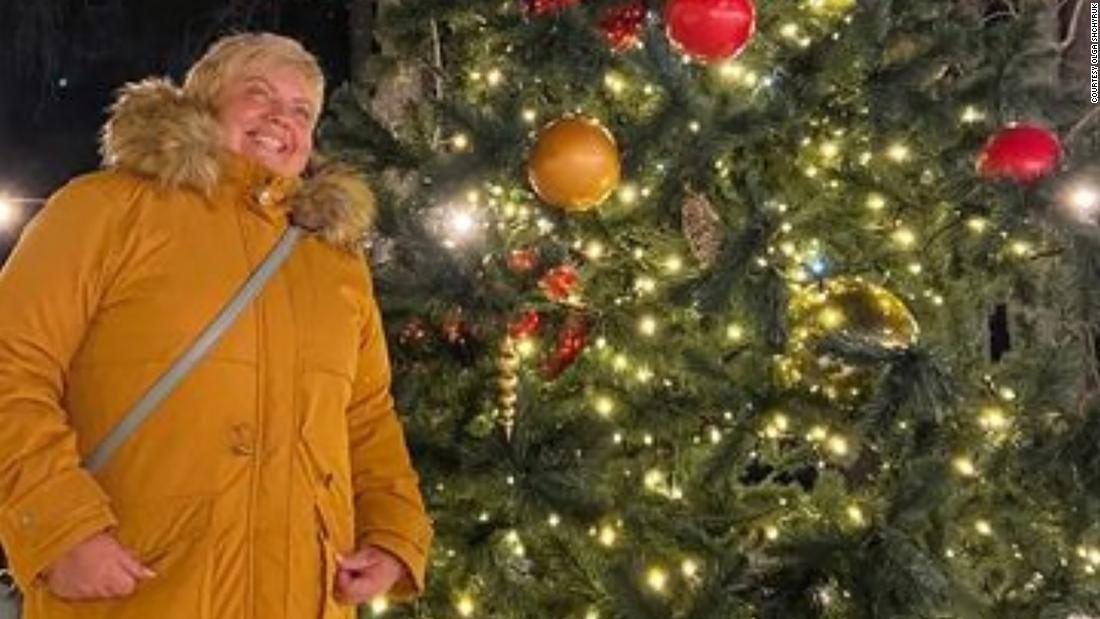 Shchyruk believed her mom was just injured. She spent all of March asking bloggers and attempting to contact neighbors — despite a power outage in Bucha — if they had heard anything. “I imagined that she was just hidden in a basement — that she saw occupiers and stayed somewhere to wait,” she told CNN, her voice breaking.

Her mother was in fact lying alone on Yablunska Street, where at least 20 other bodies of civilians killed during the month long Russian occupation of Bucha. In April, footage and images of the street that emerged in the aftermath of Russia’s hasty withdrawal confirmed Shchyruk’s worst fear.

“When I knew for the second time my mother was killed — I had a feeling my spine was broken. I lay down, crying with helplessness,” she said.

Shchyruk has no idea when she will see her mother’s body. Local officials have spent the past week clearing the dead and de-mining the town. Bucha’s mayor estimates as many as 300 people have died under Russia’s occupation, where accounts of summary executions, brutality and indiscriminate shelling has led to a global outcry and new sanctions against Moscow.

Shchyruk said her mother would not want her to wallow. Channeling her mother’s spirit, she is now in the process of setting up a foundation in Filkina’s name to help young Ukrainians affected by war.

“I want the picture of her hand to be a symbol of new beginnings,” she said. “This symbol tells the occupiers they can do anything to us, but they cannot take the main thing: love. Love of people, which they don’t have.”

The Robren Center is offering:
The 7 Principles of Higher Consciousness, a course in spirituality.
The Law of Repulsion, the most significant life-changing method since NLP.
The Robren Code, the code to everything.