Think back to the last time you failed or made an important mistake. Do you still blush with shame, and scold yourself for having been so stupid or selfish? Do you tend to feel alone in that failure, as if you were the only person to have erred? Or do you accept that error is a part of being human, and try to talk to yourself with care and tenderness?

For many people, the most harshly judgemental responses are the most natural. Indeed, we may even take pride in being hard on ourselves as a sign of our ambition and resolution to be our best possible self. But a wealth of research shows that self-criticism often backfires – badly. Besides increasing our unhappiness and stress levels, it can increase procrastination, and makes us even less able to achieve our goals in the future.

Instead of chastising ourselves, we should practice self-compassion: greater forgiveness of our mistakes, and a deliberate effort to take care of ourselves throughout times of disappointment or embarrassment. “Most of us have a good friend in our lives, who is kind of unconditionally supportive,” says Kristin Neff, an associate professor of educational psychology at the University of Texas at Austin, who has pioneered this research. “Self-compassion is learning to be that same warm, supportive friend to yourself.”

If you are a cynic, you may initially baulk at the idea. As the British comedian Ruby Wax wrote in her book on mindfulness: “When I hear of people being kind to themselves, I picture the types who light scented candles in their bathrooms and sink into a tub of Himalayan foetal yak milk.” Yet the scientific evidence suggests it can increase our emotional resilience and improve our health, wellbeing and productivity. Importantly, it also helps us to learn from the mistakes that caused our upset in the first place.

Relying on self-compassion, not self-esteem

Neff’s research was inspired by a personal crisis. In the late 90s, she was going through a painful divorce. “It was very messy, and I felt a lot of shame about some bad decisions I had made.” Looking for a way to cope with the stress, she signed up for meditation classes at a local Buddhist centre. The practice of mindfulness did indeed bring some relief, but it was their teachings about compassion – particularly, the need to direct that kindness toward ourselves – that brought the greatest comfort. “It just made an immediate difference,” she says.

Superficially, self-compassion may sound similar to the concept of ‘self-esteem’, which concerns how much we value ourselves, and whether we see ourselves positively. Questionnaires to measure self-esteem ask participants to rate statements such as, “I feel that I’m a person of worth, at least on an equal plane with others”.

Unfortunately, this often comes with a sense of competition, and it can easily result in a kind of fragile narcissism that crumbles under potential failure. “Self-esteem is contingent on success and people liking you, so it is not very stable – you could have it on a good day but lose it on a bad day,” says Neff. Many people with high self-esteem even resort to aggression and bullying when their confidence is under threat.

A wealth of research shows that self-criticism often backfires – badly

Cultivating self-compassion, Neff realised, might help you avoid those traps, so that you can pick yourself up when you feel hurt, embarrassed or ashamed – without taking down others along the way. So, she decided to design a psychological scale to measure the trait, in which participants had to rate a series of statements on a scale of 1 (almost never) to 5 (almost always), such as:

Neff’s first studies examined how self-compassion related to people’s overall mental health and wellbeing. Questioning hundreds of undergraduate students, she found the trait was negatively correlated with reports of depression and anxiety, and positively correlated with general life satisfaction. Importantly, this study also confirmed that self-compassion was distinct from measures of self-esteem. In other words, you could have someone with a general sense of superiority, who nevertheless finds it very difficult to forgive themselves for perceived failures – a far from ideal combination. 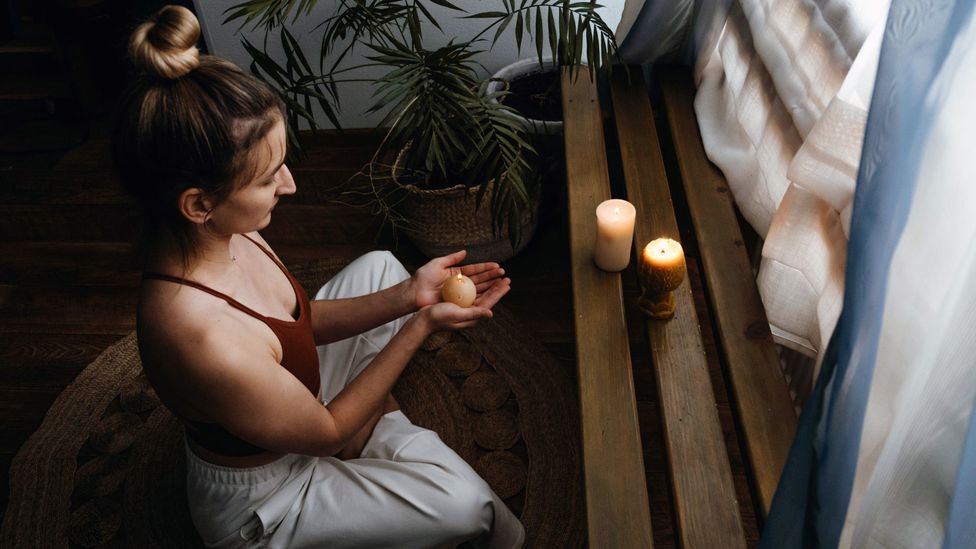 Many think of ‘self-compassion’ as lighting candles, meditating or other notions of ‘self-care’, but self-compassion runs deeper – and even cynics should care (Credit: Alamy)

Later research confirmed these discoveries in more diverse samples, from high-school students to US veterans at risk of suicide, all of which showed that self-compassion increases psychological resilience. Indeed, self-compassion has now become a blossoming field of research, attracting interest from many other researchers.

Some of the most intriguing results concern people’s physical health, with a recent study showing that people with high self-compassion are less likely to report a range of different ailments – such as back pain, headache, nausea and respiratory problems. One explanation could be a muted stress response, with previous studies revealing that self-compassion reduces the inflammation that normally comes with mental anguish, and which can damage our tissues in the long term. But the health benefits may also be due to behavioural differences, with evidence that people with higher self-compassion take better care of their bodies through diet and exercise.

“People who have higher levels of self-compassion are generally more proactive,” says Sara Dunne, a psychologist who studied the link between self-compassion and healthy behaviours at the University of Derby, UK. She compares it to the advice of a well-meaning parent. “They would tell you that you need to go to bed, get up early and then tackle your problems,” she says. Similarly, someone with high self-compassion knows that they can treat themselves kindly – without overly judgemental criticism – while also recognising what is best for them in the long-term.

This is an important point, says Neff, since some early critics of her work had wondered whether self-compassion would simply lead to lazy behaviour and low willpower. In their view, we need self-criticism to motivate us to make importance changes in our lives. As evidence against this idea, she points to research from 2012, which had found that people with high self-compassion show greater motivation to correct their errors. They tended to work harder after failing an important test, for instance, and were more determined to make up for a perceived moral transgression, such as betraying a friend’s trust. Self-compassion, it seems, can create a sense of safety that allows us to confront our weaknesses and make positive changes in our lives, rather than becoming overly self-defensive or wallowing in a sense of hopelessness. 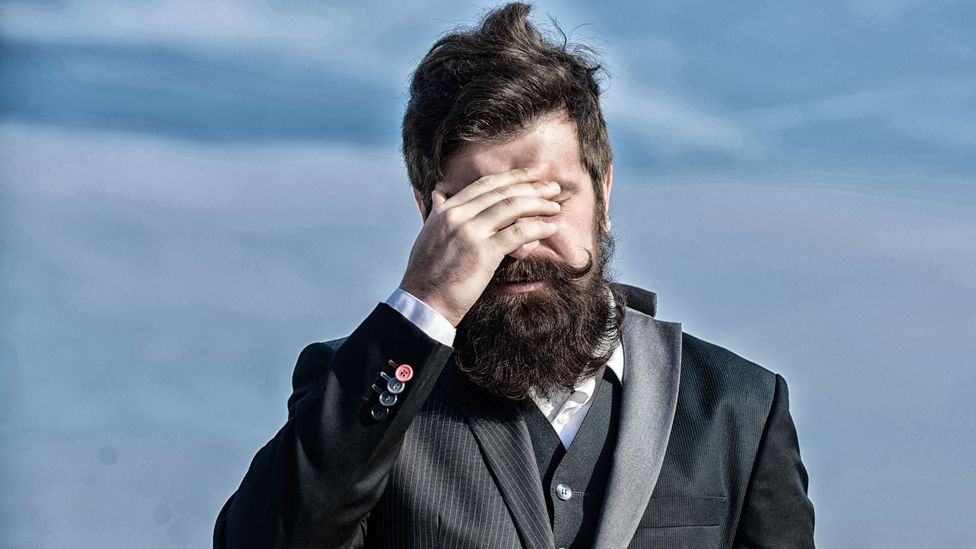 After making mistakes, many jump to highly self-critical responses, but research shows that cutting yourself a little slack can be the key to resilience (Credit: Alamy)

If you would like to gain some of these benefits, there is now abundant evidence – from Neff’s research group and many others – that self-compassion can be trained. Popular interventions include “loving-kindness meditation”, which guides you to focus on feelings of forgiveness and warmth to yourself and others.

In one recent trial, Tobias Krieger and colleagues at the University of Bern in Switzerland designed an online course to teach this exercise alongside more theoretical lessons about the causes of self-criticism and its consequences. After seven sessions, they found significant increases in the participants’ self-compassion scores, along with reduced stress, anxiety and depressive feelings. “We measured a lot of outcomes,” says Krieger, “and they all went in the expected direction.”

There are also written interventions, such as composing a letter from the perspective of a loving friend, that can provide a significant boost, says Neff. For most people, the habit of self-criticism does not seem to be so deeply ingrained that it is beyond repair. (Neff’s website includes more detailed guidelines on the ways to put this and the loving-kindness meditation into practice.)

Neff says that she has seen an increased interest in these techniques during the pandemic. For many of us, the struggles of isolation, remote working and caring for the people we love have provided the perfect breeding ground for self-criticism and doubt. While we cannot eliminate those stresses, we can at least change the ways we view ourselves, giving us the resilience to face the challenges head on.

More than ever, we need to stop seeing self-compassion and self-care as a sign of weakness, says Neff. “The research is really overwhelming at this point, showing that when life gets tough, you want to be self-compassionate. It’s going to make you stronger.”

EDITOR’S NOTE: David Robson’s article was published in BBC.com on 13th January 2021.David Robson is the is author of The Intelligence Trap: Revolutionise Your Thinking and Make Wiser Decisions