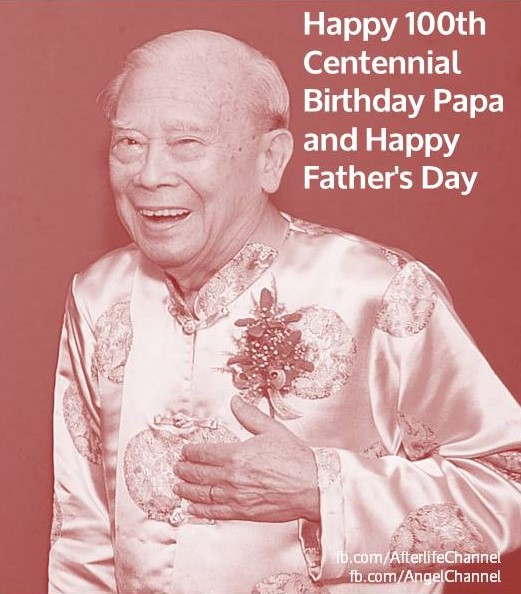 My Mum and I receive occasional After Death Communications (ADC) or Afterlife Signs from him.

ADCs from Dad to my Mum were usually moths around Chinese New Year period, and some unique looking beetles.

ADCs from my Dad through my Twin Soul Angel Brenda were more dramatic.
Twice a fly resting on my hand for 33 minutes and 21 minutes.

Read and Watch World Record Longest Afterlife Sign – a Fly on a hand for 33 minutes: https://www.youtube.com/watch?v=K99E4v7cr4Y&t=101s

Our father had good Karma to live up to 93 years old, with relatively good health.
We miss you dearly.

Watch Michael Chen’s last video and his advice for a long marriage and career advice from a 94 year old about how to make a 65 year old marriage last > https://www.youtube.com/watch?v=NenFb9iKzeA

Happy 100th Centennial Birthday Papa and Happy Father’s Day. After Death Communications and Afterlife Signs of a Fly resting on my hand twice – for 33 minutes and 21 minutes (with Video Proof)