It wasn’t so long ago that we convinced ourselves we are a superpower or, at least, one that’s definitely in the making. 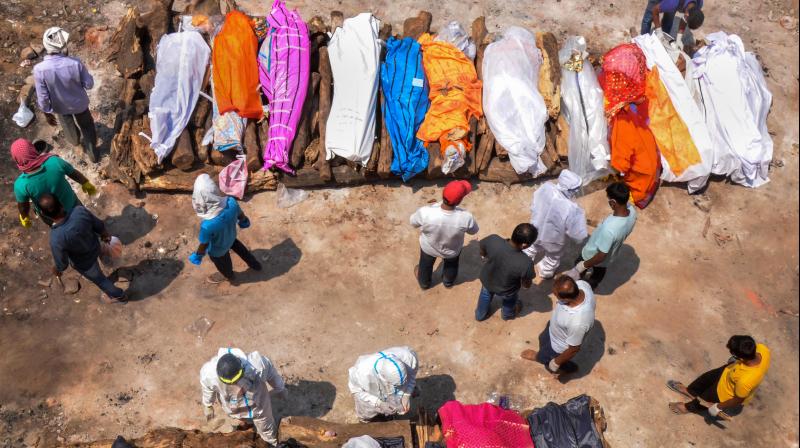 It wasn’t so long ago that we convinced ourselves we are a superpower or, at least, one that’s definitely in the making. We believed the evidence was long and compelling — the world’s largest democracy, the sixth biggest economy, a 1.38 billion-strong domestic market, excellence in IT and the West’s back office, an unbeatable cricket team, the home of Bollywood, one of the most successful diasporas and, of course, a Prime Minister on first name terms with all the world’s top leaders. The RSS was convinced this was because we are a Hindu majority nation. The BJP was more specific. It was because of Narendra Modi.

Well, an invisible virus has punctured the bubble of our pretensions. As Covid-19 increases by nearly 400,000 cases a day — mathematically projected to possibly reach a million a day in two weeks’ time — our friends have shut their doors on us. From Paris to Hong Kong, Canberra to Dubai, flights from India have been barred.

Meanwhile, our “enemies” are reaching out. China has offered assistance. Charities in Pakistan were the first to write to our PM. Days later Imran Khan tweeted his offer to help. This is, of course, kindness but it’s likely to rattle the government.

So what went wrong? There are many answers but the one that concerns me is the argument which suggests that we brought this on ourselves. I’m referring both to our earlier belief that we’re something special and have conquered the virus and also our irresponsible refusal to plan and prepare for the worst. In other words, our judgment. And before I go into detail, let me add it’s judgment, more than size and power, that one expects of a superpower. That’s where we have failed.

First, after the number of new infections started to remarkably, though inexplicably, shrink from September on-wards, we claimed victory. Just as Europe and America were experiencing second or even third waves, far worse than the first, we convinced ourselves that our fate would be different.

In January, Prime Minister Modi told the World Economic Forum that India has “defeated” Covid-19. Three weeks later, on February 21, the BJP passed the following resolution: “It can be said with pride that India not only defeated Covid under the able, sensitive, committed and visionary leadership of Prime Minister Narendra Modi, but also infused in all its citizens the confidence to build an ‘Atma Nirbhar Bharat’.

The party unequivocally hails its leadership for introducing India to the world as a proud and victorious nation in the fight against Covid.” In March, the health minister, who is himself a doctor, added his personal touch. He claimed to the Delhi Medical Association that “we are in the endgame of the Covid-19 pandemic in India”.

This misplaced, unscientific, irrational and downright foolish conviction that we are special is the cause of the crisis we face today. As a result, we did not plan for a second wave. In fact, we shut down the special facilities created to handle the first. Empowered committees that recommended enhancing oxygen production in April 2020 were ignored.

Even when it was decided to do so, the tenders were not placed for eight months. Time, we felt certain, was on our side. So, of the 162 plants sanctioned by the health ministry, only 33 have been installed. Consequently, today, we’re forced to shut down virtually all industrial use of oxygen while we are desperately trying to import 50,000 tonnes from any country willing to sell it quickly.

I’ll touch on only one more example of our irresponsible incompetence. We boast of being the vaccine manufacturer of the world. Yet with our eyes wide open, we failed to ensure we can produce enough to vaccinate ourselves. Once again, the explanation is we either didn’t bother to plan or weren’t capable of doing it intelligently.

Consider this — as far back as May or June last year we knew that if 75 per cent of our people were to be given a two-dose vaccine, we would need two billion jabs. That was elementary math. We also knew that our existing vaccine production capacity could not produce anywhere near this number in the time-frame that we required. So, what did we do? A superpower would have immediately increased its capacity. Doubled or tripled it, if necessary. We did nothing. We blithely carried on as if there was no looming problem. Now we have a crisis. And, once again, the world we are so eager to impress simply cannot understand how we let this happen.

Consequently, the picture which the world sees of India is not that of a potential superpower but an inept and flailing Third World country struggling but unable to handle a crisis its inflicted on itself. Hospitals are paralyzed by the lack of beds and oxygen, patients are dying in ambulances and, sometimes, on the streets, pavements and open fields have been converted into crematoria, and everywhere we have helpless, crying, forsaken citizens, with no one to turn to.

This is the grim image the Western press now has of our country. But as far as our government is concerned, it’s even worse. Because all of this is compounded by the dawning realization that the leader they once thought was strong and decisive now appears to have been unconcerned by the challenge he faced or incapable of responding to it. Indeed, his own behavior suggests he was either ignorant of how bad things could become or unwilling to believe it.

So, today, the world is horrified by what they see of India and deeply dismayed. The braggadocio has been stripped aside. The exposed reality is ugly and impossible to hide.

Finally, there’s also how we view ourselves. Our confidence in being special seems to have disappeared. This is not the exclusiveness that we sought. Television and the social media have brought home a different truth. We’ve been reduced to a nation that’s more than frightened, we’re in panic.

The dream of achieving India’s inevitable and irresistible destiny has metamorphosed into a nightmare where we know our own incompetence and irresponsibility is what haunts us. We long to wake up to a bright and beautiful morning. But when will this sleep of torment end?

Covid-19 is a Collective Karmic Debt as well as a Country Karmic Debt.

The Karmic Debts List. One of these 29 can stop you from attracting success. (The Law Of Repulsion)