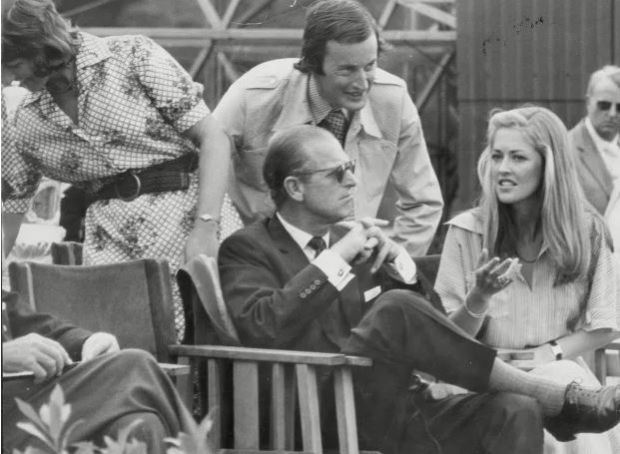 NETFLIX show The Crown’s depiction of Prince Philip as an adulterer sparked fresh rumours about his 70-year marriage to the Queen.

Let’s take a closer look at the unsubstantiated allegations.

What are the rumours about Prince Philip?

Philip’s reputation as a ladies’ man predates his 1947 marriage to the young Princess Elizabeth.

A dashing naval officer, he already had a string of romantic liaisons under his belt by the time he wed.

There was his romantic friendship with Canadian debutante Osla Benning, and three flings while posted in Australia.

While the Duke was Down Under he reportedly romanced society beauty Sue Other-Gee, close friend Georgina Kennard and Sandra Jacques, with whom it is said he had “a very full love affair”.

And rumours claim although the prince was infatuated with his wife, saying he had “fallen in love completely and unreservedly”, he quickly grew frustrated with life as a royal consort.

Forced to give up his naval career, he found he had no real status in the palace and was always playing second fiddle to the Queen.

Maybe because she understood his annoyance, the Queen tolerated his decision to spend long periods away from her on solo engagements around the world.

Who are the women alleged to have had flings with the prince?

The Queen mostly ignored the rumour mill but her patience must have been tested to the limit by one notorious incident in October 1948.

The “showgirl” was actress Pat Kirkwood, 27, the West End’s biggest star, famous for her shapely legs.

She met the prince, also 27, when he crashed drunkenly into her dressing room with his friend — and her then boyfriend — Baron Nahum, the court photographer.

Philip reportedly drove Pat to a Mayfair restaurant in his sports car then on to a nightclub, where they allegedly stayed up until dawn dancing cheek-to-cheek.

Pat always denied rumours of an affair, but they refused to die.

Her friends believe that her association with Philip is the reason she never received any official honours, despite 60 years of stardom.

She tellingly revealed: “I suspect he felt trapped and rarely got a chance to be himself. I think I got off on the right foot because I made him laugh.”

But, letters between her and Philip that came to light after her death in 2007, aged 86, referred to the gossip as a “ridiculous rumour” spread by “evil-minded” people, indicating an affair never happened.

In October 1956 the prince set sail on the royal yacht Britannia with pal Mike Parker and had still not returned by the following February.

American newspapers speculated that there was a rift between the royal couple, and cruelly reported that women were being smuggled aboard the royal yacht.

The Queen put out an official denial of any marital problems in a Palace statement that said: “It is quite untrue that there is a rift between the Queen and the Duke.”

Then she flew to Portugal to meet him, with a cheeky joke up her sleeve.

Philip had been photographed with a “full set” — a moustache and beard — so the Queen decided to wear false whiskers for their reunion.

By the time she arrived he was clean-shaven. The stunt was intended to show how relaxed she was about the swirling rumours.

Another woman who was persistently linked to the Duke over the years is Lady Penelope Brabourne.

She is no stranger to heartbreak after her husband of 31 years, Lord Brabourne, left her for a Bahamian fashion designer in 2010.

Blonde, slim and strikingly beautiful, Lady Brabourne, 64, has been Philip’s partner in carriage driving competitions since 1994.

She has also been a regular guest at the weekend house parties he holds at secluded Wood Farm, on the Sandringham Estate in Norfolk, but never stays when the Queen is there.

Sources say she acts as the prince’s confidante and shares his boisterous sense of humour.

The Queen has always been keen to show how relaxed she is about the relationship, making sure Lady Brabourne tops any palace party guest list.

Sacha, Duchess of Abercorn once explained that “The Queen gives Philip a lot of leeway. Her father told her, ‘Remember he’s a sailor. They come in on the tide’.”

Sacha should know — as she is another of Philip’s close female friends who has been a source of constant speculation.

Lady Abercorn, who at 71 is 25 years Philip’s junior, admits there is a “highly charged chemistry” between them but insisted: “I did not go to bed with him. He isn’t like that.”

Other women who have caused feverish chatter over the years include Hollywood actress Merle Oberon, who kept a signed photograph of Philip in a silver frame and entertained him at her estate in Mexico City.

Another alleged flame is Liverpudlian belly dancer Patricia Kluge and TV personality Katie Boyle, who called claims that Philip once rapidly exited the back of her house as her husband arrived at the front as “pure fabrication”.

When the prince’s childhood friend Helen Cordet, a Greek cabaret star, refused to reveal the paternity of her two children after she had separated from her first husband, it was assumed Philip was the father.

The record was later set straight — their father is a French airman who became Helen’s second husband.

Source: ROYAL RUMOURS. Did Prince Philip have an affair in the 1950s?
By Emily Fairbairn

Many of Prince Philip’s closest confidants maintain that while the Duke of Edinburgh was an admirer of attractive women, he didn’t act on those feelings. As former Palace press secretary Dickie Arbiter put it, “He has always liked window shopping, but he doesn’t buy.”

Infidelity is a prominent theme in the second season of The Crown. Over the course of ten episodes Jackie laments JFK’s straying eye; Eileen Parker sues her husband, Prince Philip’s private secretary, for divorce of the grounds of adultery; and Prime Minister Harold Macmillan is cuckolded over and over again. But the lynchpin of the motif is Prince Philip himself.

Did Prince Philip had affairs? He was an admirer of attractive women. “He always liked window shopping, but he doesn’t buy.”