If I ask my friends about Voltaire, their first reply will likely be: it’s a big boulevard. Lots of political rallies take place there, because it leads from Republic Plaza to Nation Plaza. But Voltaire is of course first and foremost a great man of French literature.

So, if you’re familiar with French literature and philosophy, it’s almost certain that you’ve heard of the French author, François-Marie Arouet, otherwise known as Voltaire! Voltaire is considered to be one of the most influential authors of the Enlightenment movement in the 18th century.

Before I get started on the 5 most interesting facts on this French literary superstar, you may be asking yourself, what is the Enlightenment movement?!

In the 18th century, historians and philosophers were in the spotlight. Sometimes called the “Century of Philosophy”, this time period was brimming with new ideas.

According to the intellectuals of the time, a complete upheaval of traditional authority was necessary for change, and they were the first group of philosophers to argue that humankind could change and thrive through the use of rationality.

That’s also why the Enlightenment is sometimes referred to as the Age of Reason. Many historians credit this movement for the beginning of both the French and American revolutions, talk about a game changer!

Now that you have some background on the time period, let’s talk Voltaire!

No one really knows where the pen name Voltaire came from…

There could be many reasons why Voltaire decided to adopt a pen name. There was the strict censorship at the time, and being an author who wrote about new and innovative ideas (that sometimes poked fun at the royalty!) was a dangerous profession.

He could have also chosen to ditch his family name out of disrespect for his father, who never approved of his writing career. Even after sending him to the best law schools in France, it just wasn’t what Voltaire wanted to do with his life. His father never understood why, and therefore their relationship deteriorated.

In any case, the author never explained why he chose Voltaire! There are a few different theories going around on where it came from. This includes the possibility that Voltaire is an acronym of the Latin spelling of his last name, or that it stems from a childhood nickname le petit volontaire, or “determined little thing”.

As Voltaire died in 1778, it looks like this is one mystery that will remain unsolved.

Voltaire had a soft spot for animals

These days it’s normal to hear the words “I’m vegetarian” – there seems to be vegetarian and vegan options at almost every restaurant. It’s even more normal to hear about people advocating for animals rights!

This was not the case in the 18th century. That didn’t stop Voltaire – he published many works condemning the mistreatment of animals. He writes in the Philosophical Dictionary:

“How pitiful, and what poverty of mind, to have said that the animals are machines deprived of understanding and feeling . . . “

While Voltaire never explicitly spoke about being a vegetarian (probably because at the time the notion didn’t exist other than for religious reasons), he also wrote with disgust that “Men fed upon carnage, and drinking strong drinks, have all an impoisoned and acrid blood which drives them mad in a hundred different ways.”

Eating meat can drive you mad?! No wonder he wasn’t eating it!

Rebel with a cause: Voltaire was exiled and imprisoned many times

I mentioned above that there were very strict censorship laws in the 18th century. This meant that speaking out against religion, royalty, or the government was strictly off limits. Unfortunately for Voltaire, these were a few of his favorite things to criticize.

Voltaire was exiled for the first time in 1716 for making fun of the duc d’Orleans, and when he returned to Paris in 1717, he was soon imprisoned in Bastille for writing poetry that put certain French laws into question.

Once more in 1726 Voltaire is imprisoned in Bastille and then exiled, this time to England, where he stayed for 3 years. 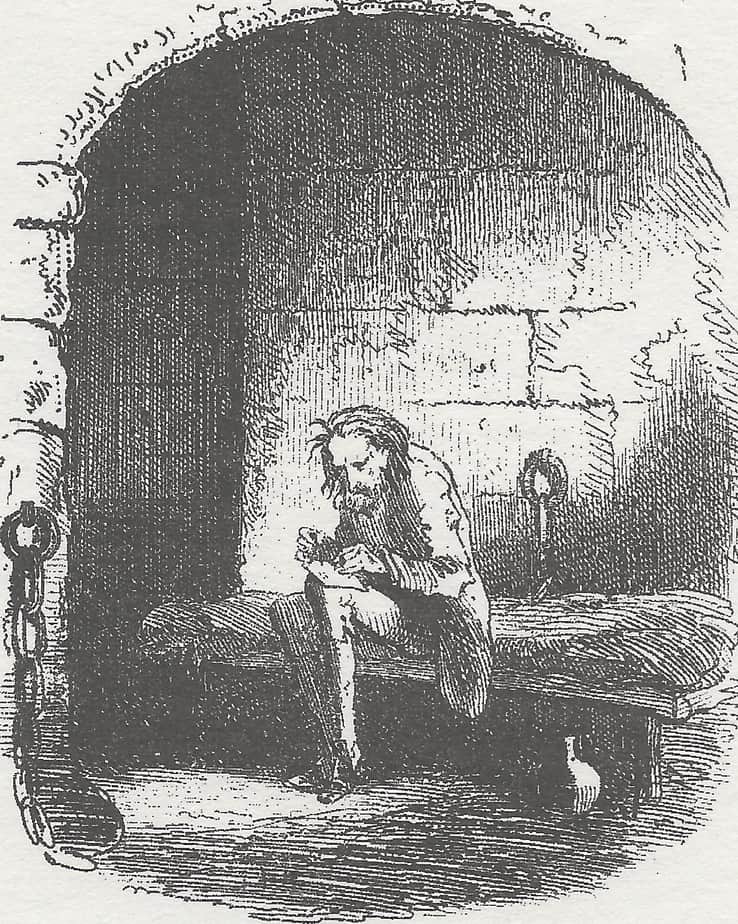 There, he continued to speak his mind with his book Letters on the English, which again angered the French government, causing Voltaire to go into hiding for nearly 15 years in a small town outside of Paris. Poor guy!

Voltaire and coffee: a love affair

If you’re anything like me, mornings are hard. But there is one thing that makes them easier: coffee! Well, it turns out that Voltaire shared that opinion, as the author is said to have drank as many as 40 cups of coffee a day.

Fun fact for any of you visiting Paris: Voltaire’s favorite place to down the good stuff is Le Café Procope, the oldest café in the city that is still up and running! Find Le Procope in the 6th arrondissement.

Voltaire is also said to have written up to 18 hours a day. The 40 cups are making more and more sense…

Most of us have heard the story of the apple that fell on the head of Sir Isaac Newton, causing a major eureka moment in the discovery of gravity. When Voltaire discovered Newton’s ideas, the rest is history.

Although the two never met, Voltaire played a big part in spreading the word with his book Elements of the Philosophy of Newton.

Voltaire’s fame helped inform the word about Newton’s theories. In fact, Voltaire was one of the first to write the story of how Newton discovered gravity through an apple!

Not only did Voltaire help popularize Newton, his books and essays were considered to be more serious than the poetry and plays he was famous for. Voltaire was soon taken more seriously as a writer and a philosopher as a result. A win-win for the two of them!

Paris offers plenty of ways to encounter Voltaire: some 100 years after his death in 1775, his heart was installed at the National Library, la Bibliothèque Nationale. You can visit any week day, at Quai François Mauriac, 75706. It is open all week from 9AM to 8PM, but only in the afternoons on Mondays and Sundays.

Voltaire was then transferred to the Pantheon in 1791 – to be right across from his worst enemy, Rousseau. However, it was the Comédie Française, the national French theater, that won Voltaire’s brain. In 1927 the brain still existed, however it was not correctly preserved and eventually decanted, shrunk, and disappeared. This leaves us with only legend…

There you have it, my 5 facts about Voltaire you should know. Do you feel like you learned something?!

If you’re interested in reading some of Voltaire’s works (which I hope you are!) I suggest the novella Candide, which is my all-time favourite book of his!

5 Surprising Facts about Voltaire. He wrote up to 18 hours a day, and drank 40 cups of coffee a day.