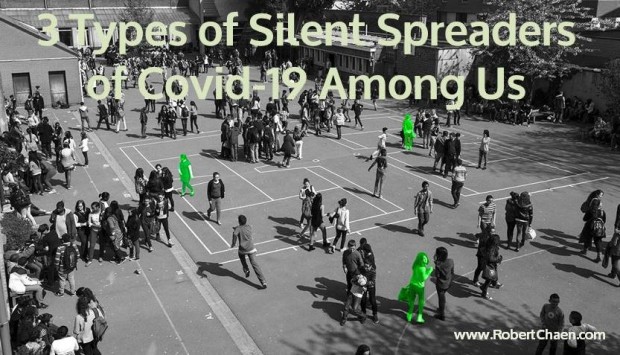 “There is evidence that SARS-CoV-2 has this ability to spread silently,” says Shweta Bansal, an infectious disease modeler at Georgetown University.

Indeed, cases of COVID-19 among nursing home residents, choir groups and families fuel a growing concern about people who are infected, yet feel generally OK and go about their daily lives, giving the virus to friends, family members and strangers without knowing that they themselves have it.

But there are wide gaps in our understanding of how many people fit this category of “silent spreaders” — as they’re called by some public health researchers — and how much they contribute to transmission of the disease.

Silent spreaders can be divided into three categories: asymptomatic, presymptomatic and very mildly symptomatic. Here’s what we know about these variations.

1. Asymptomatic: people who carry the active virus in their body but never develop any symptoms

“Nothing at all,” says Tara C. Smith, an epidemiologist at Kent State University’s College of Public Health. “No fever, no gastrointestinal issues, no breathing issues, no coughing, none of that.”

As you might imagine, it’s hard to figure out when someone has a disease but shows no signs of it.

Some cases of asymptomatic carriers have been confirmed by finding and testing people who were in close contact with COVID-19 patients. For those who tested positive without symptoms, follow-up exams confirmed that about 25% continued to show no signs, World Health Organization officials said on April 1, citing data from China.

No one can truly determine the impact of asymptomatic cases on spread until there’s more testing. But so far, they have made up a sliver of the total number of people who’ve tested positive. And the affected individuals seem to skew young. A small clinical study from Nanjing, China, followed 24 people who tested positive but didn’t show overt symptoms at the time. In the one to three weeks after diagnosis, seven continued showing no symptoms. Their median age was 14.

“Can those people who are completely asymptomatic, who never develop any symptoms, transmit the infection? That’s still kind of an open question,” says Smith.

2. Presymptomatic: people who have been infected and are incubating the virus but don’t yet show symptoms

After infection, symptoms might not develop for five to six days — or even two weeks, according to the Annals of Internal Medicine. The time between catching the virus and showing symptoms is called the presymptomatic phase.

How do these individuals figure into transmission?

People appear to be most infectious right around the time when symptoms start, said Maria Van Kerkhove, technical lead for the WHO’s Health Emergencies Programme, at an April 1 news conference. However, “we do have evidence, from testing and modeling studies, that suggest people who are presymptomatic can definitely transmit this virus,” says Smith, the epidemiologist, most likely in the one to three days before they start showing symptoms, according to the WHO.

So far, presymptomatic is a much more common category than asymptomatic. About 75% of people who test positive without showing symptoms turn out to be presymptomatic, displaying coughing, fatigue, fever and other signs of COVID-19 in a later follow-up exam, said Van Kerkhove.

At a nursing home in King County, Washington, about a third of its 82 residents tested positive for the coronavirus in mid-March. Half of those were free of fever, malaise and coughing when they were swabbed for the virus, though most went on to develop symptoms. The coronavirus spread rapidly through the facility just two weeks after it was introduced by a health care provider, despite the nursing home’s policy of isolating residents with signs of COVID-19. This suggests that “transmission from asymptomatic and presymptomatic residents, who were not recognized as having SARS-CoV-2 infection and therefore not isolated, might have contributed to further spread,” according to research published in the CDC’s April 3 “Morbidity and Mortality Weekly Report.”

A study in Singapore found similar evidence of presymptomatic spread among people who went to church, took singing classes or puttered at home with their spouses.

3. Very mildly symptomatic: people who feel a little unwell from a COVID-19 infection but continue to come in close contact with others

“We’re very lucky that this isn’t a severe infection for everyone, but because of that, some people feel a little sick and power through,” says Seema Lakdawala, a flu researcher at the University of Pittsburgh.

Spreading COVID-19 while having a cough or very mild fever doesn’t fully count as silent transmission, says Bansal, the infectious disease modeler: “There’s some signal there at least.”

But people who continue to frequent communal and public places with a light cough or mild fever may unwittingly spread the disease in the early days of symptom onset — the time they’re thought to be most infectious.

Even when a person’s own symptoms remain mild, others they infect can become very sick. In mid-January, a man returned to his home in Nanjing from a trip to Hubei province, the epicenter of China’s epidemic. Ten days later, his wife started running a fever and vomiting; soon, she developed severe pneumonia and required care in the intensive care unit. The man was tested for the coronavirus, and the test came back positive; he’s presumed to have spread the virus to his wife. X-ray scans showed signs of the virus in his lungs — but he consistently reported feeling fine, according to epidemiological research published in Science China Life Sciences.

What we don’t yet know

How many people are mingling in the population without knowing they’ve been infected with the coronavirus?

It’s simply too soon to say. In one of the places where there has been extensive testing, the nursing home in Washington state, 56% of those who tested positive had no symptoms when they got tested. Aboard the Diamond Princess cruise ship docked in Japan, February data showed that up to 50% of the people who tested positive showed no symptoms at the time and that an estimated 18% remained asymptomatic.

Are asymptomatic and presymptomatic cases responsible for a lot of transmission?

A modeling paper in Science suggests that in China before the lockdown, undiscovered cases — mainly people with “mild, limited or no symptoms” — were less infectious than known cases but were still possibly responsible for 79% of transmission, because so many of them continued to congregate or travel while contagious. Other papers from Singapore and China suggest that presymptomatic cases account for 6% to 13% of transmission.

The National Institutes of Health announced Friday that it’s recruiting up to 10,000 volunteers for blood testing to look for antibodies to COVID-19 — a sign that a person was infected in the past. “This study will … [tell] us how many people in different communities have been infected without knowing it, because they had a very mild, undocumented illness or did not access testing while they were sick,” said Dr. Anthony Fauci, director of the National Institute of Allergy and Infectious Diseases, in a news release.

3 Types of Silent Spreaders of Covid-19 Among Us