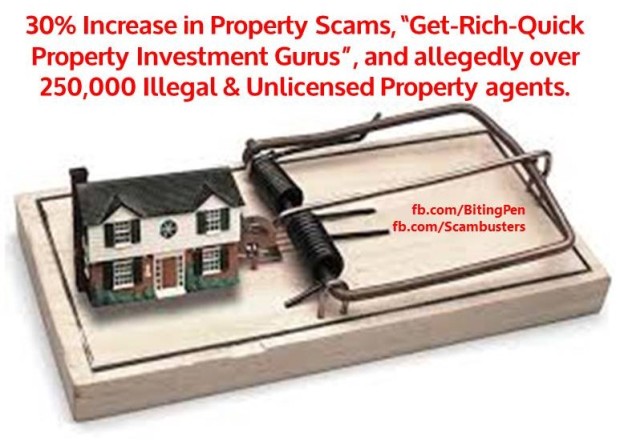 PETALING JAYA: Property experts agree the number of housing scams during the movement control order (MCO) and recovery MCO may be higher than reported.

Expressing its concern about the increasing number of property scams and illegal brokers in the industry, the Malaysian Institute of Estate Agents (MIEA) recently noted a 30% increase in the number of complaints received during the MCO and RMCO – most of them from members of the public who have been cheated by illegal brokers.

He said social media platforms were a breeding ground for so-called “property investment gurus” during the lockdown, with numerous courses on how to make millions from investing in property ultimately turning out to be nothing more than glorified get-rich-quick schemes.

“They teach you to make a lot of money but they’ve never used any of their investment strategies for themselves,” he said. “It’s like a diabetes patient teaching you how to control your sugar level.”

MIEA said it had identified 13 ways the public can be scammed, with misrepresentation and excessive commissions key among them.
Among the more common scams during the MCO were illegal brokers promising buyers lucrative deals and then collecting deposits of at least RM1,000 or RM2,000.

However, once buyers proceeded to sign the sales and purchase agreement, they would find that the terms were not as promised, MIEA said. What was promoted as a freehold property turned out to be leasehold, and the buyers would be told that their deposits are non-refundable.

There were also cases of illegal brokers who claimed they could secure homes in low-cost government projects, only to then vanish once they had collected deposits.

“The numbers are just the tip of the iceberg,” MIEA CEO Soma Sundram Krisnaswamy told FMT.

Cheong said that unless the government makes it a law that real estate dealings can only be carried out through licensed agents, illegal brokers will continue to flourish. “The reality is this. If you deal with licensed agents, they won’t run away with your money.”

MIEA said the lack of awareness about the difference between a registered and unregistered agent was one of the reasons for scammers being so rampant.

● If you are a victim of big scam, and you are selected, Biting Pen EPlatform can hold a Press Conference and invite our Investigative Journalist Network to cover your scam story – after making a Police Report, and having a Lawyer present.

Do you know that Raising Pre-IPO funds is Illegal in Malaysia and you need a SCM License to be a Private Equity firm?

6 Steps How to Protect Yourself as a CULT Whistleblower, Make a Police Report, and Connect with a News Editor