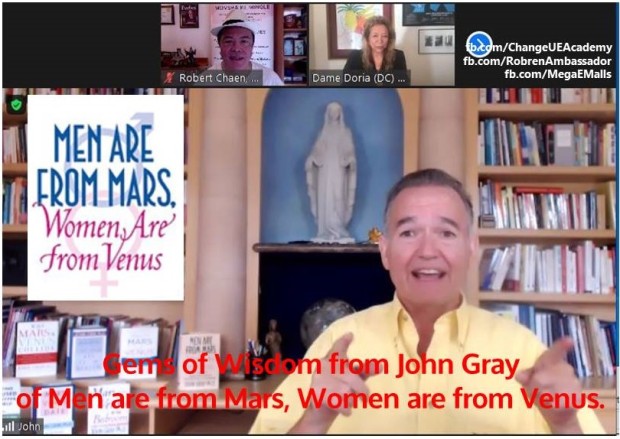 Confessions of John Gray, the Author of “Men are from Mars, Women are from Venus” (Warning: Private Adult SEX Education)

Register for free support during this Covid-19 Pandemic & worst Financial crisis  since before The Great Depression: https://FridayswithDoria.com

ADULT SEX EDUCATION NOTICE
NOTE: This is all I could transcribe from the super-fast pace 4 hour zoom session with John Gray.

● 80% of your happiness should not be dependent on your partner.

● Like monkeys if a woman feels she is not heard, she’ll get louder and louder.

● Don’t make a big issue, or make mountain out of a molehill.

● Say, “It’s not a big deal.
“Just let you know that… “.
Go for a 6 second hug, leave the room immediately for the other to digest the message.

● Every complaint is a hidden request.

● Anger does not make it safe for women.

● A non-sexual affectionate hug is more important and more effective than a sexual touch.

● Why put $1 to 1 million women, when you can put $1m to one woman.
John F Kennedy would find two new lovers. Newness in a sex partner doesn’t last.

● Men will listen as long as he is not being blamed.

● Let your male partner solve your problem for you.

● 3 Magic Phases to Pump Up your Man for Women to say to Men:

“You make a difference”

● When you appreciate men, they’ll fly.

● John has a game called “Olympics Champions”.
Men run on stage and pretend they are doing a victory lap. At the end the men will always bow to the audience as a symbol of service.

● When the man feels appreciated he will serve you.

● Women, ASK for MORE from Men:  It is wrong to think men will know, therefore women do not need to ask) – ask, ask, ask your Men, Men want to feel needed and responsible to provide and fulfil what their women ask.

● Men, If you offer help to women without asking – you get extra bonus.

● Men need their Cave Time – to rebuild his testosterone.

Q. Women ask what I do when he goes to this Cave?
A. Get a life. Don’t depend on him all the time.

● Don’t talk about work after sunset.

Mars Talk: 10 for me, keep feelings out of it,  let’s negotiate,

● During Covid-19 stay at home, there were more divorce in China and around the world.

●We have a Monkey Brain, we say nasty, rubbish, hurtful words. People blame that they have seen their partners’ true colors but this is not who they are.

● If a man is having a cortisol response, the issue may be escalated.

He is the Genie, all powerful, “Your wish is my command!” “As you wish.”

Good exercise to get women to ask men, and for men to feel empowered to fulfil the needs and wants of his woman.

Rules: He will do anything you wish for 20 minutes.

He will do nothing until she asks!

She is not allowed to do anything.

● Feminine side receives, but women are not good receivers.

● Gratitude is exercising your feminine side.

● Masculine side is selfless = gives.

● All a man really want is he is successful in providing what you need, he wants to feel appreciated.

● Don’t get caught in their resentments.

● So easy to blame the partner.
You are pushing her or him away.

● It’s easier to blame our partner than take responsibility.

If I felt all those negative things about a partner, I would be pushing him or her away.

● You must come from an open heart to create love.

● How to heal a broken heart?

John’s first book was “What you feel you can heal.”
John lost Bonnie a few years ago.
He felt guilty, “I could have saved her.”

“You are my champion.” Bonnie helped John when he got angry at the hospital.

● A good friend is not attached to your following his or her advice.
This is the control element in spouses.

● When you are not who you are – you attract bad men.

● Be authentic – not trying to change the other.

● Same sex: we all have Male and Female sides

Extra harmony, gay – one will be more dominant.

● Make sure the woman has an orgasm first.

Every time I have a climax, I lose him.

She lose interest in sex as well.

● John practices Tantric Sex i.e. men don’t release the semen for prolong sex.
Once a man ejaculates semen, his libido immediately subsides, and it takes a longer time to have the next erection.

● But RICH women are less happy, because their rich and powerful husbands have a distorted and inflated view of sex.

● The rain will pass, trust the sun will come out.

● Why men hide money, usually they don’t want women to tell him what to do.

● Own your crazy feelings – upset about betrayals in the past,

● Women have much bigger betrayal issues than men.

● The Law of Attraction is the Law of Femininity – Law of Happiness.

● Vulnerability – women so easy to go the male side e.g working hard,

● Every talk is rehearsal until you on Oprah Show.

● Something persists as you are not getting what you want.

● There’s no such thing as a failure. We quit on ourselves.

● Michael Jackson – the only time he was happy when he was on stage performing, otherwise he was a tormented soul.

SURVEY: Q1. Will you (and your friends) be interested in the “Men are from Mars, Women are from Venus” In the Bedroom & Relationship Course and in your city.

Q2. Will you be interested in “Men are from Mars, Women are from Venus” In the Workplace and Gender Difference Course?

7 Afterlife Signs Why Brenda José Crossover Was Meant To Be
I couldn’t prevent my wife Brenda’s death.
After 6 years and 7 months, I have let go the guilt that I promised to bring Brenda back from Hong Kong to where I was living in Kuala Lumpur – 2 months before fateful day on 23rd December 2013.
There were countless signs that proved that Brenda Jose’s crossing over was meant to be, and there was nothing in the Universe that could have prevented it from happening.
Firstly, the prediction from Hong Kong’s famous blind Kowloon Fortune Teller that Brenda will die at 60 years old did not come true. She reveal this to me when she last visited me in October 2013. Due her own Karma and Earth’ human beings’ Collective Big Karmic Debt, she was needed as an Angel 9 years earlier than was written in the heavens and astrology…
Read full article: https://tinyurl.com/y3zslfyq