There are 3 Money Personality Types:

Your relationship with money can sometimes determine a big part of your personality. Author Ken Honda says there are three kinds of people when it comes to money. And knowing which one you are can be the key to successful budgeting.

1. The Compulsive Saver
Savers look for discounts and deals when shopping. They are excited to keep loose change. Saving money guarantees their security and a frugal lifestyle comes easy. But no matter how much they have, a saver will always feel the need to save more money.

2. The Compulsive Spender
Spenders want to use all their cash they have. They enjoy shopping and never miss a chance to treat themselves or others. Spending money gives them joy. Even if they don’t like everything they buy.

3. The Compulsive MoneyMaker
Moneymakers like working a lot and earning high salaries. Life is best when they are making as much money as possible. Moneymakers don’t feel guilty about prioritizing work over their personal life. And most of their energy goes into trying to make more money.

Think about your personality type and if it’s the type you want to be. Break some bad habits and create new ones that can improve your financial life. 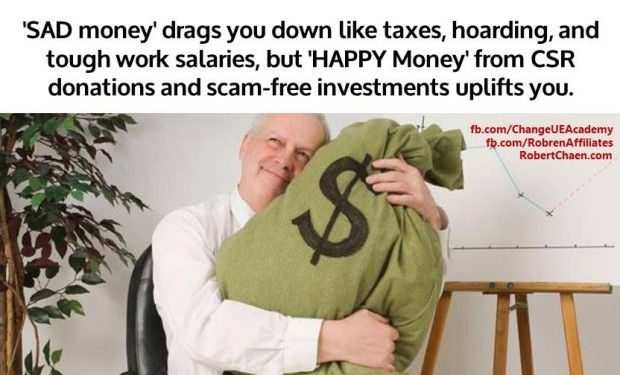 ‘SAD money’ drags you down like taxes, hoarding, and tough work salaries, but ‘HAPPY Money’ from CSR donations and scam-free investments uplifts you