The definition of Muse:
A person, or an imaginary being or force that gives someone ideas and helps them to write, paint, or make music (Cambridge dictionary).
The source of inspiration for a creative artist.
In ancient Greek and Roman stories, one of the nine goddesses who were believed to give encouragement in different areas of literature, art, and music.

What is the difference between an “Angelic Muse” and a Muse?
The main difference is simply one is physical and the other is beyond this world.

What is the difference between inspiration from a Muse and motivation
A Muse is especially applicable to artists.

Although muses are usually associated not usually applied to ‘non-artistic’ types such as politicians, military generals, engineers, IT geeks. Two great names, one very special meeting. Allegedly, Picasso refused to paint the French beauty, although he never said why. In this terrific picture above, it looks as if Bardot was pouting at Picasso because she’s not used to not getting her way with men! By Hannah Furness,
Picasso was one of art’s most famous womanisers, once telling one of his mistresses: “There are only two kinds of women, goddesses and doormats”.

The works on paper reveal how each woman, from young lovers to wives and his most famous muse, influenced his art, tracking his developing style through his entire career.

“His wives and lovers were absolutely integral to his career; they were very much the subjects that inspired him.
“It’s fascinating to look at how each image of the women in his life and how he was representing them, and how it reflects his career and personal life. It’s all intertwined.” 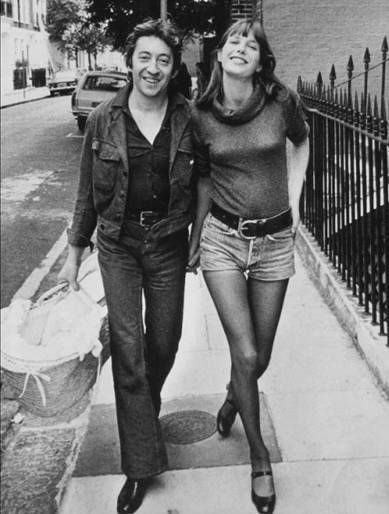 ● 8 women who were muses to Serge Gainsbourg

Serge Gainsbourg is undeniably one of the most well-known and revered French singers of all time, but he wasn’t just known for his talent as a lyricist – he was also famed for his ability to seduce and captivate women throughout his life. From his short yet passionate involvement with Brigitte Bardot to his iconic twelve-year romance with Jane Birkin, we’re revisiting the women who touched the dandy’s life and influenced his five-decade-long reign in the French music scene.

2. Brigitte Bardot
Brigitte Bardot, the ultimate sex symbol of the 60s, also succumbed to the charming Gainsbourg’s advances. In October 1967, the two singers joined forces in the record studio to record their now-legendary song, Harley Davidson. Their secret relationship only lasted for three months, as Bardot was married to millionaire Gunter Sach at the time, who, upon discovering her indiscretion, quickly divorced Bardot. A tragic but influential moment for Gainsbourg’s career.

3. Jane Birkin
Birkin was 22 and Gainsbourg 40, but that didn’t faze the couple, and they embarked on their relationship. However, this time it was Gainsbourg who was not single, as he was seeing American actress Marisa Berenson at the time. This didn’t stop Gainsbourg, though, and the duo went on to be together for twelve years, during which Birkin gave birth to their daughter, Charlotte, in 1971.

4. Charlotte Gainsbourg
The most influential muse to her father, the pair sang the song Lemon Incest together in 1984. The song discussed the love between a father and daughter, and shocked audiences with its on-the-line lyrics hinting at sexual relations.

7. Catherine Deneuve
He wrote for her the iconic song Dieu est un fumeur de havane before going on to pen her entire album. A true friendship was forged between two French icons.

8. Vanessa Paradis
Serge Gainsbourg played an incredibly influential role in Vanessa Paradis’ career. Gainsbourg wrote two of the for songstress’ most emblematic singles – Tandem et Dis-lui toi que je t’aime, as well as almost all of her second album Variations sur le même t’aime. They were a huge factor in Paradis’ success in her musical career, and earned her the Victoire de la musique award in the female singer category in 1990.

● Adolf Hitler’s muse was Eva Braun whom he married the night before they killed themselves.

10 Women from the Life and Crimes of Adolf Hitler