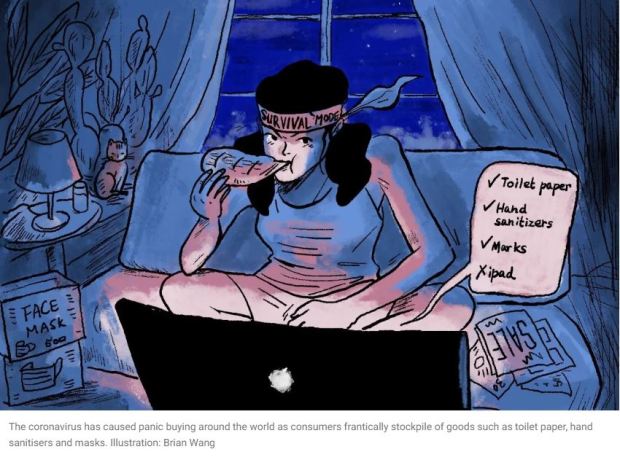 Amid mounting uncertainty, the coronavirus pandemic – which has claimed the lives of more than 41,000 people and infected at least 842,000 worldwide – is fundamentally changing consumer behaviour in Asia, Europe and North America.

Consumer experts said the 2009 global financial crisis, the Great Depression that started in 1929 and the September 11 terrorist attacks give some clues about how and when global consumption might recover. But the complexity of this crisis, the number of variables and its magnitude make this consumer recovery unprecedented and difficult to predict, they added.

“The coronavirus pandemic has completely changed patterns of consumer behaviour all over the world. People are afraid, and when people are afraid, they go into survival mode,” said Jesse Garcia, a Los Angeles-based consumer psychologist, who is also the CEO of market consulting firm My Marketing Auditors.

Hong Kong’s retail sales plummeted a record 44 per cent in February and those figures are only expected to get worse, with sales forecast to slump between 30 and 40 per cent in the first half of the year, according to the Hong Kong Retail Management Association.

In the US, retail sales dropped by 0.5 per cent in February, even before many states had issued stay-at-home orders to protect the world’s largest economy. The decline was the biggest fall since December 2018.

Experts say non-essential products and services are set to be worst affected by the coronavirus pandemic, while goods and services that can be consumed at home will see a spike in sales.

“Online consumer behaviour is frenetic,” said Ross Steinman, a professor of psychology at Widener University in the US state of Pennsylvania. “Consumers are refreshing and refreshing and refreshing websites to secure grocery delivery times, purchase paper towels from their usual big box retailer and scavenge for rice and canned soup from third party sellers on Amazon.

“A pronounced spike in coronavirus cases will only amplify the freneticism.”

So far, one of the biggest shortages for consumers is toilet paper. Television stations across the globe have beamed images of empty supermarket shelves and huge queues as people hoard toilet paper rolls, masks and hand sanitiser.

The frantic stockpiling can be explained by a psychological concept called informational conformity, said Vicki Yeung, associate professor at the Department of Applied Psychology at Lingnan University in Hong Kong.

“When people lack knowledge and are in an uncertain situation, they tend to follow the group’s behaviour and blindly conform, but once they obtain more information, and digest and process the situation, the panic gradually fades away,” she said.

“During this Covid-19 pandemic, people generally feel jittery and anxious because they feel their sense of control has disappeared.”

Unlike other recent global crises such as the September 11 attacks, the coronavirus is less a one-time sharp shock to the system and more of a rolling source of anxiety that could retreat and resurface repeatedly, consumer behaviour experts said.

This was the pattern with the Black Death plague that hit Europe in 1347 and returned episodically over many years, ultimately killing millions of people.

“It may be we’ll have to shut down things again in October or August. And this could go on for years,” said Charley Ballard, an economist with Michigan State University in the US. “The more that happens, the more damage it does to buoyant consumer psychology.”

Furthermore, relative to the 2009 financial crisis and even the Great Depression, when much of the damage was concentrated at least initially in the financial sector, this crisis has seen virtually the entire economy grind to a halt all at the same time, devastating employment and consumption.

Last week, a record 3.3 million Americans applied for unemployment benefits within one week, as restaurants, hotels, barber shops, gyms and retail outlets shut down in a nationwide bid to stem the pandemic. The previous record of 695,000 was set in 1982.

On Tuesday, Goldman Sachs predicted the US jobless rate will hit 15 per cent in the second quarter of this year from the coronavirus economic freeze, and could rise further beyond that to near the historic peak of 24.9 per cent seen in 1933 during the Great Depression. Economists at the St. Louis district of the US Federal Reserve projected unemployment could cost as many as 47 million jobs in the US this year, sending the unemployment rate past 32 per cent before making a sharp recovery.

China’s unemployment rate jumped to 6.2 per cent for January and February from 5.2 per cent in December and 5.3 per cent a year earlier. It was the highest level since records began in 2016, but did not include China’s estimated 291 million migrant workers.

Consumer spending accounts for more than 60 per cent of the Chinese economy and drives 70 per cent of the US economy. But with the pandemic causing many people to go into hibernation and likely to lead to cycles of job cuts, economists have predicted a consumer-led global recession by the second quarter of this year.

Just how long it will take for consumer behaviour to return to normal depends on each person’s psychological resilience, including how quickly they can adapt to change, how optimistic they are and whether they can adopt strategies to regain a sense of control, Yeung said.

Anirban Mukhopadhyay, chair professor of marketing at Hong Kong University of Science and Technology, said as long as the coronavirus threat was still present, people would remain fearful to some extent. But he added that people were resilient.

“Human beings adapt to events and stimuli over time,” Mukhopadhyay said. “Research has shown that even people who win lotteries tend to return to their earlier levels of life satisfaction after some months, as do people who have to have amputations.

“So even if the source of the fear does not go away, we learn to live with it.”

Ballard, from Michigan State University, estimated it could take upwards of two years for American consumers to feel secure enough in their jobs and gain enough confidence to fully open their wallets. A longer and more episodic duration for the disease could push that higher, he added.

Further complicating the consumer picture, he said, is that many supply chains are at risk of breaking. And consumers will be wary of spending for a while in many traditional areas, including crowded sporting events and concerts, restaurants and flights.

Some experts have even suggested that consumer behaviour may be permanently changed as a result of the pandemic.

“It seems very unlikely that people will get back to life as it was before, once the coronavirus is over,” said Andreas Kappes, a lecturer in psychology at City University of London

“People’s behaviour is extremely orthodox, often referred to as the status quo bias and captured in expressions like ‘past behaviour best predicts future behaviour.’ Now, the crisis forces us to change our behaviour, radically, and we might discover that new way suits us better.”

Coronavirus: from China to the US, consumer behaviour radically altered as world retreats into ‘survival mode’