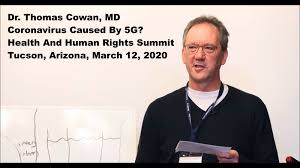 A YouTube video that suggests 5G internet causes COVID-19 has some people convinced their smartphones could kill them. Meanwhile, critics of the video—which was filmed at a March 12 health summit in Tucson, Arizona, and uploaded to YouTube by the account Parents for Healthcare Rights—are slamming it and saying that it’s spreading bogus information in the midst of a very real and serious global crisis.

The video shows a presentation by Dr. Thomas Cowan, M.D, who claims that, because Africa was not as affected by the coronavirus outbreak at first, there was reason to believe 5G could be the cause of the virus. His argument was, “Africa is not a 5G region.” That line of thinking seems to be debunked as of Thursday, since the World Health Organization has confirmed around 640 cases of coronavirus in Africa, according to the BBC.

5G is a new internet technology launched by mobile companies in 2020. It operates on the same concept as a 4G smartphone but is expected to be faster and more reliable when it comes to internet speeds.

Cowan’s 5G claims were slammed and debunked by people from all over the internet. The YouTube channel TechMagnet laid out a 20-minute explanation for why Cowan’s claims are “fake news.” Still, some commenters didn’t believe TechMagnet’s argument.

“*Government sends dude to throw off the human race,” user ContentCentral commented on the TechMagnet video. “Sounds like you have a pay out from the top mobile companies!!! Lying to the people! 5g is dangerous,” wrote Marie Whittall.

Some people agreed with Cowan’s point in the comments section of the video featuring his presentation. “As they put 60+ more satellites in our sky 4 MONTHS ago, and before CORVID19…. This guy is SPOT ON,” wrote user C K.

Even musician Keri Hilton joined in the conversation. “People have been trying to warn us about 5G for YEARS,” she wrote in a now-deleted tweet captured by HuffPost. “Petitions, organizations, studies…what we’re going thru is the affects [sic] of radiation. 5G launched in CHINA. Nov 1, 2019. People dropped dead. See attached & go to my IG stories for more. TURN OFF 5G by disabling LTE!!!”

Others were baffled by the conversation and claimed there’s no validity to the argument that 5G phones and cell towers are causing coronavirus or death by radiation.

Dr. Georges C. Benjamin, executive director of the American Public Health Association told HuffPost that the claim made in the YouTube video is false. “COVID-19 is caused by a virus that came through a natural animal source and has no relation to 5G or any radiation linked to technology,” he wrote in an email.

COVID-19 is widely known as a quick-spreading respiratory virus, and there are more than 246,000 confirmed cases globally.

No Connection with Covid-19 and 5G, Fake News by Dr. Thomas Cowan