Massive EXODUS at Singapore Causeway and INTERSTATE out of Klang-KL area – WHO amongst the Super Crowds are Covid-19 Super-Spreaders?

Anyone found to breach the order will face up to two years in jail, a fine, or both. Second-time offenders will face steeper penalties of up to five years in jail.

The country reported 120 new cases on Tuesday – 90 of which are linked to a mass Islamic religious meeting held last month, according to the health ministry – following an increase of 190 cases over the weekend and 125 cases on Monday. These spikes brought Malaysia’s total number of cases to 673.

The nation also recorded the first deaths from Covid-19 on Tuesday – a 34-year old man who attended the Sri Petaling Mosque tabligh convention and a 60-year-old man, Pastor David Cheng.

HOW EXTENSIVE IS THIS PARTIAL LOCKDOWN?

The order, announced by Prime Minister Muhyiddin Yassin on Monday evening, mainly aims to limit large gatherings to decrease the chance of the virus spreading.

All houses of worship and business premises must be closed except for supermarkets, public markets, convenience stores and shops selling everyday necessities. Friday communal prayers, obligatory for Muslims, have been suspended.

Malaysians returning from overseas must undergo a health check and self-quarantine for 14 days. Restrictions have also been imposed on the entry of tourists to Malaysia, but foreigners will be allowed to leave the country.

Nationwide, all kindergartens, primary and secondary government and private schools, as well as all public and private higher education institutions and skills-training institutes, will be shut.

Muhyiddin has also ordered that all government and private premises be closed except essential services, including water, electricity, energy, telecommunications, transport, broadcasting, finance, security and health.

“The government views this situation seriously, especially with the development of the second wave [of infections],” he said. “We can’t wait any longer for things to get worse … This is the only way we can prevent more people from being infected by the outbreaks that can destroy lives.”

The national police chief on Tuesday announced a ban on interstate travel from midnight on Tuesday, except with the express permission of the police.

“Those who wish to return home must fill out a form and hand it to the police to obtain permission. [We] are readying these forms now,” Inspector-General of Police Abdul Hamid Bador told reporters.

WHAT DOES THIS MEAN FOR BUSINESSES AND WORKERS?

Workers have expressed concern regarding the specifics of paid and unpaid leave. Muhyiddin on Monday announced the government would be providing monthly financial assistance of 600 ringgit (US$140) for up to six months to workers forced to take unpaid leave beginning March 1.

This involved an allocation of 120 million ringgit (US$28 million) with as many as 33,000 workers targeted to receive the benefit, he said.

There will also be a 2 per cent discount for electricity charges for commercial, industrial and agricultural sectors and domestic users from April 1 to Sept 30.

A serious contraction of the economy is expected due to the breaking up of supply chains and labour issues.

“In terms of employment, companies will see a lot of issues as they need to pay fees but there is no production, no productivity going on. How will they manage the cost of labour when nobody going to the office? The demands of the market can’t be met when people can’t work,” said political economist Terence Gomez.

“The government was slow to act on this despite initially having it under control. After the religious gathering it should have acted swiftly and stopped mass gatherings, restricted travel. Indecisiveness proved to be our undoing, escalating the problem until there was no choice but to go into lockdown, which will have serious repercussions on the economy.”

The religious event, or “tabligh”, became an infection cluster after 16,000 people – 14,500 of whom were Malaysians – gathered to pray from February 27 to March 1. Attendees returning home to Brunei, Singapore and Indonesia have since tested positive for the virus.

Malaysia’s health ministry on Tuesday said 8,786 participants from the cluster had been identified, 3,439 of whom had been tested, with a total of 338 confirmed cases.

Economics professor Yeah Kim Leng from Sunway University said while public health took precedence over economic priorities, businesses would be hit by the mandatory closures while employees on no-pay or reduced salary would have lower income and therefore less to spend.

“Already on a softening trend as shown by the weak retail sales and industrial production figures for January 2020, domestic demand will experience a pronounced decline during the lockdown period,” he said.

“A resumption of daily lives and business activities, supported by government stimulus measures, will enable the economy to stabilise quickly and resume its normal growth trajectory. Again, this is premised on the assumption that the containment period is effective in arresting the virus spread and no further extreme measures are needed.”

HOW HAVE MALAYSIANS REACTED?

While many have praised the government for taking decisive action, others have raised questions about the finer details of the order and demanded further clarifications. Opposition stalwart Fahmi Fadzil took to Twitter to point out that the prime minister’s announcement had “raised more questions than answers”, while a hotline set up by the government for the public has been flooded with callers since it was activated.

On Tuesday, many Malaysians took the opportunity to return to their hometowns outside Kuala Lumpur, despite experts advising against returning home and potentially spreading the coronavirus – so far concentrated in the capital – to rural areas.

The first signs of panic buying have also been reported, particularly for items such as toilet paper and milk.

Others have approached the situation with humour, taking to social media to share Netflix recommendations. On Twitter, The Purge – a dystopian horror film about a 12-hour lockdown during which crime is legal – and Thanos, the villain from Marvel’s Avengers series, were two of Malaysia’s trending topics. 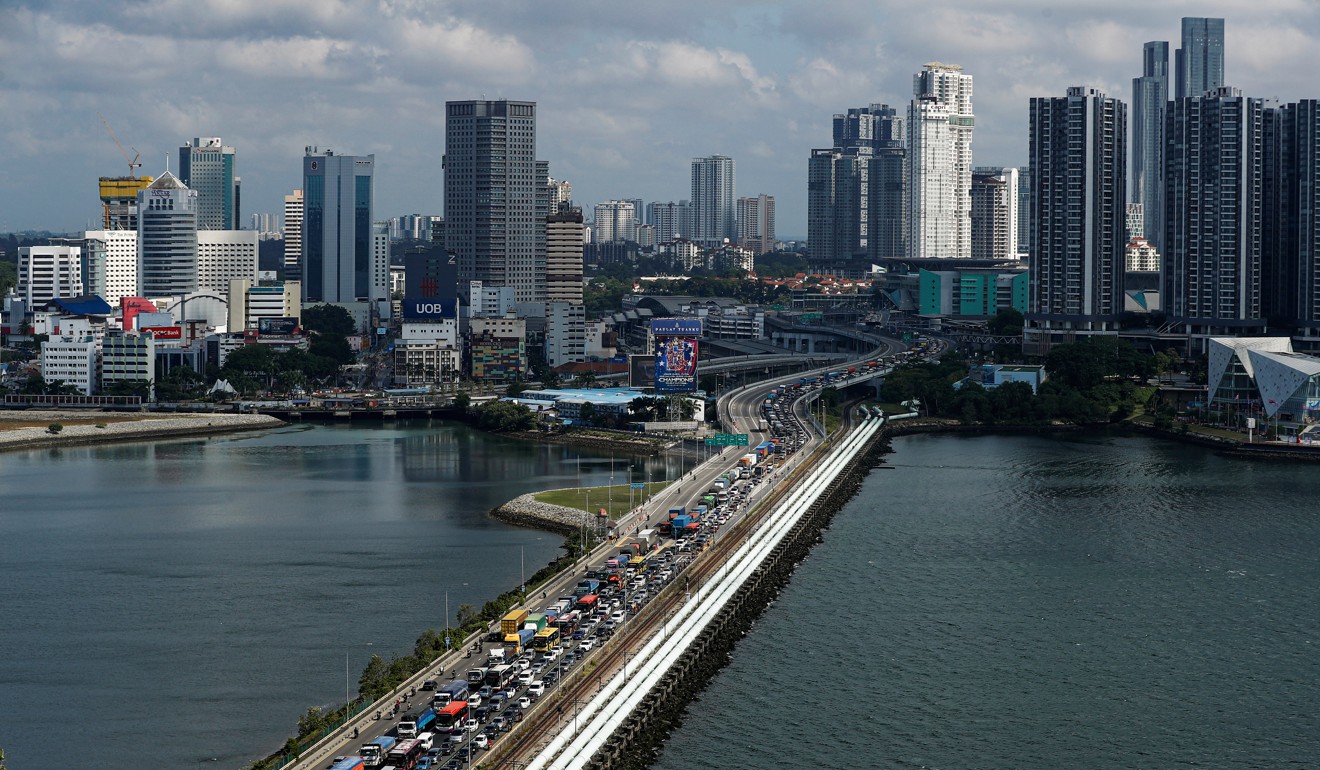 WHAT IS THE BROADER IMPACT?

Across the Causeway, neighbouring Singapore has viewed the move with some trepidation due to its reliance on its northern neighbour for labour and fresh food, including poultry and produce.

Singaporean leaders have reassured its citizens – many of whom have engaged in panic buying, cleaning out supermarket shelves – that its food sources have been diversified.

About 300,000 people cross the border between Singapore and Malaysia daily, with the bulk employed in blue-collar industries such as factories, security services and retail.

Malaysian authorities have confirmed that any Malaysians working in a neighbouring country, including Singapore, would not be allowed “go in and out on a daily basis” on the grounds of community safety.

WHAT DOES THE GOVERNMENT STILL NEED TO CLARIFY?

There are several points of confusion that still require clarification from the government, including whether restaurants qualify as “food suppliers” that are allowed to remain open during the restricted movement period.

As Malaysians are still allowed to venture from their homes, the question on whether car workshops will remain open has arisen, as well as whether condominium and building management services will be allowed to operate.

Other questions include the definition of mass gatherings, the status of 24-hour establishments such as 7-Eleven convenience stores or all-night laundromats, and what will happen to ride-hailing services like Grab.

As kindergartens and schools have been shut, parents who work in essential services have questioned whether they still need to attend work. Others have asked if Bursa Malaysia will be suspended for the two-week period.

What is 2m Social Distancing? No gatherings of 50 or more. Read more: https://tinyurl.com/ujuy99s

Fresh Air and the Sun are Natural Disinfectants – Go OUTSIDE for the SUN, avoid crowds: Lessons from the 1918 Spanish Flu Pandemic