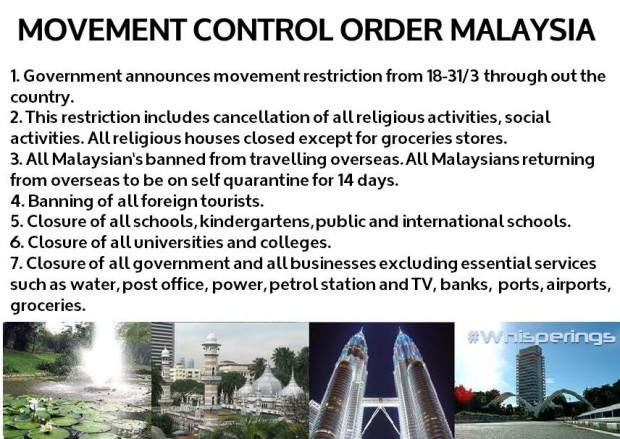 Government announces movement restriction from 18-31/3 through out the country.
2. This restriction includes cancellation of all religious activities, social activities. All religious houses closed except for groceries stores.
3. All Malaysian’s banned from travelling overseas. All Malaysians returning from overseas to be on self quarantine for 14 days.
4. Banning of all foreign tourists
5. Closure of all schools, kindergartens, public and international schools.
6. Closure of all universities and colleges.
7. Closure of all government and ALL BUSINESSES excluding essential services such as water, post office, power, petrol station and TV, banks, ports, airports, groceries. 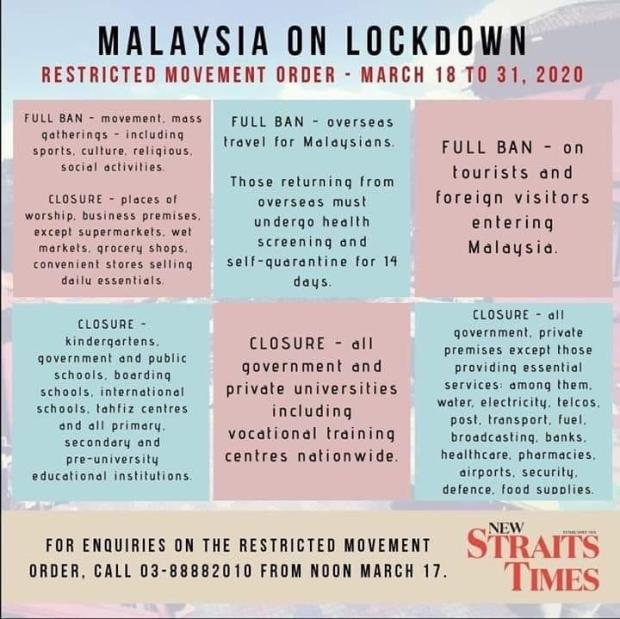 Source:  PM: Malaysia in lockdown from Wed until March 31, all shops closed except for essential services

KUALA LUMPUR, March 16 — Malaysia will be in a nationwide lockdown from this Wednesday (March 18) until March 31 due to the Covid-19 outbreak, Prime Minister Tan Sri Muhyiddin Yassin announced today.

The prime minister said that the government has decided to implement a ‘restriction of movement order’ under the Prevention and Control of Infectious Diseases Act 1988 and the Police Act 1967.

“The government’s priority now is to avoid the spreading of new infections, which will affect more people.

“Therefore, drastic action needs to be taken. The government has decided to implement ‘restriction of movement order’ starting from March 18 to March 31,” he said in a special announcement broadcast on Astro Awani, RTM, TV3 and BernamaTV.

Muhyiddin said this means that all business premises have to be shut down, except for outlets such as supermarkets and grocery stores selling daily essentials.

He said all government and private premises would be closed during the lockdown, except for essential services such as utilities, telecommunications, transport, banking, health, pharmacies, ports, airports, cleaning and food supplies.

He said that the lockdown also means all Malaysians will be banned from travelling abroad, and that no tourists or foreigners will be allowed to enter the country.