1. “Coronavirus will peak worldwide in April-July in various degrees in nearly all countries. Prepare for the worst until pass October 2020.
There will be 3 Covid-19 Waves:
1. First Wave: First Covid-19 clusters in a country
2. Second Covid-19 Wave: Returning nationals and imported from Foreigners visiting
3. Third Wave: If traces of Covid-19 survives pass December 2020, it will mutate to a ‘common flu’ but with 1% Death rate. The third wave is the scariest as it will behave Spanish Flu.”
The 1918 influenza pandemic (Spanish Flu) was the most severe pandemic in recent history. It was caused by an H1N1 virus with genes of avian origin. Although there is not universal consensus regarding where the virus originated, it spread worldwide during 1918-1919. In the United States, it was first identified in military personnel in spring 1918. It is estimated that about 500 million people or one-third of the world’s population became infected with this virus. The number of deaths was estimated to be at least 50 million worldwide with about 675,000 occurring in the United States.

3. “Coronavirus will spread as a ‘seasonal common flu’ but with 1% death rate.”

Coronavirus: loss of smell or taste could be a symptom, growing evidence suggests

BREAKING NEWS: 1/3 cases in China are unlisted SILENT Carriers, tested positive but no symptoms. Proof that Covid-19 will likely become a common flu but with around 1% death rate.

The risk posed by people who have been infected with the new coronavirus but show no symptoms has been highlighted by an Italian study which suggests they carry the same viral load as symptomatic patients.

4. “An International Celebrity or National Politician will die from Covid-19 (it will not be Tom Hanks).

Coronavirus: loss of sense of smell or taste could be a symptom of Covid-19

5. “Some governments will fall because of Collective Big Karmic Debt (during this Covid-19 period, started in December 2019). The start of the fall of Chinese Communist Party (CCP) and President Xi Jinping.”
(The PH Malaysian government fell on 29th February 2020, in return the PN Backdoor government will likely fall; and more to come).

The Spanish Flu is said to have contributed to the fall of Austria and Germany in World War 1 as they suffered heavier losses due to it compared with the British and the French, and this tipped the scale in favour of the Allied powers.

The pandemic, along with WW1, put an end to the second industrial revolution and contributed to the beginning of the end of the once-mighty British Empire.

How Covid-19 can Change the Geopolitics, Economics and Politics of Southeast Asia

When Robren made the first Covid-19 Prediction that it was the start of the fall of CCP and President Xi on 24th January 2020, people laughed and ignored.

When SINGAPORE AIRLINES cancelled 96% of its flights, you know the global Airline industry is in massive trouble.

Dow drops 13%, for its worst day (16th March 2020) since Black Monday, and its largest point drop in history

IMF warns coronavirus recession could be worse than 2008 financial crisis

7.“Tokyo 2020 Olympics Games will be postponed for the first time. Groups of 50 or more, Religious places and Festivals, Sports events, Concerts, the World’s biggest Conferences and Trade Fairs will be cancelled in 2020.”
(came true on 24th March 2020)
(The 1944 Summer Olympics were cancelled due to World War II). 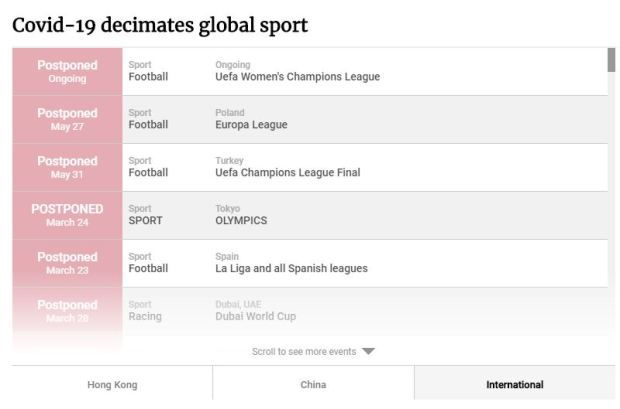 Robren are the Twin Souls of Angel Whisperer Robert Chaen and Angel Brenda.

Robren made the First COVID-19 Prediction, before publishing on 24th January 2020:

As predicted by Robren, the peak of the Chinese Communist Party was the massive 70th anniversary celebration in 2019 which was overshadowed by world news in Hong Kong. After that it will be downhill for President Xi Jinping and the Chinese Communist Party because of Wuhan virus, pork shortage, Uyghur human rights issue, Hong Kong protests, failure of one country-two systems for Taiwan, US-China trade war, and imminent Big Collective Karmic Debt calamities. 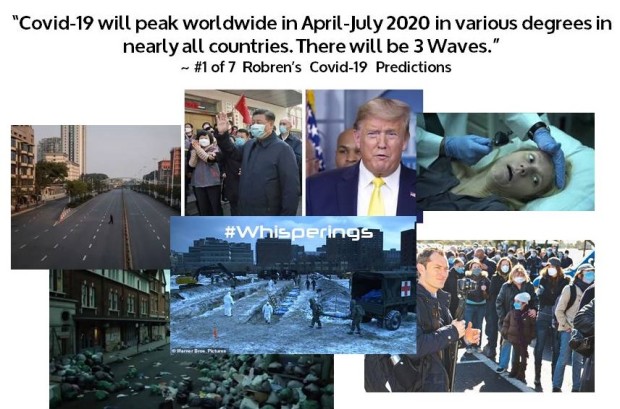 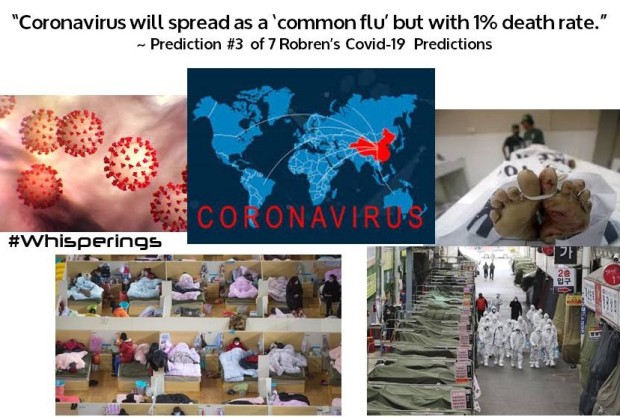 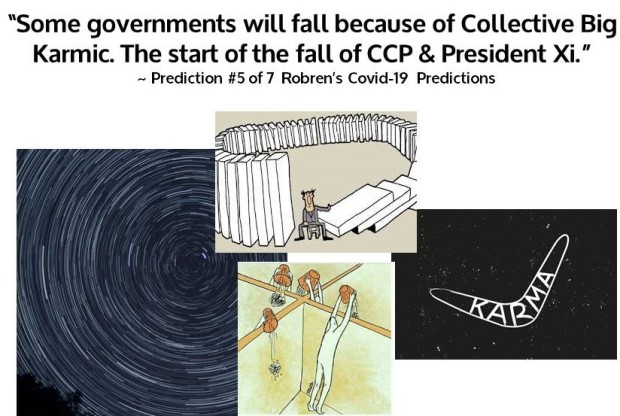 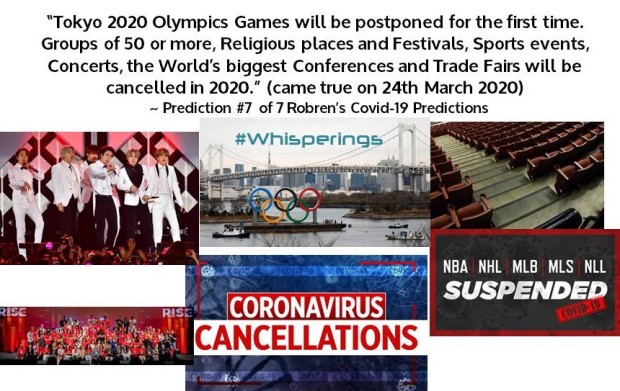 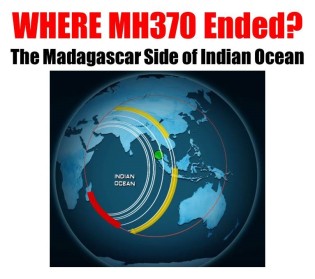 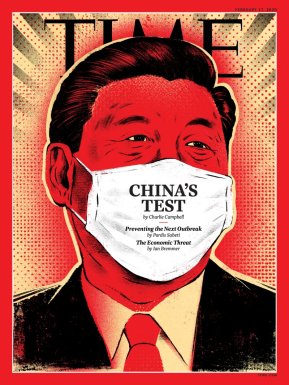 Robren First Prediction: Coronavirus will be the biggest China and world epidemic since Hong Kong Flu which killed one million people worldwide in 1968 and 1969 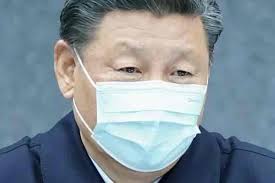 Will Covid-19 topple China’s one-party regime and the fall of Xi Jinping? 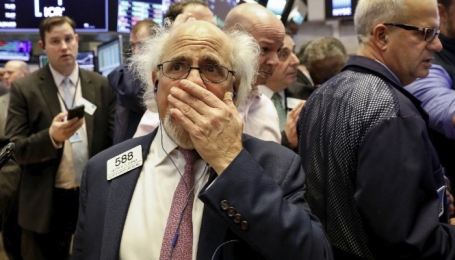 Three Ways Covid-19 can cause a Global Financial Crisis 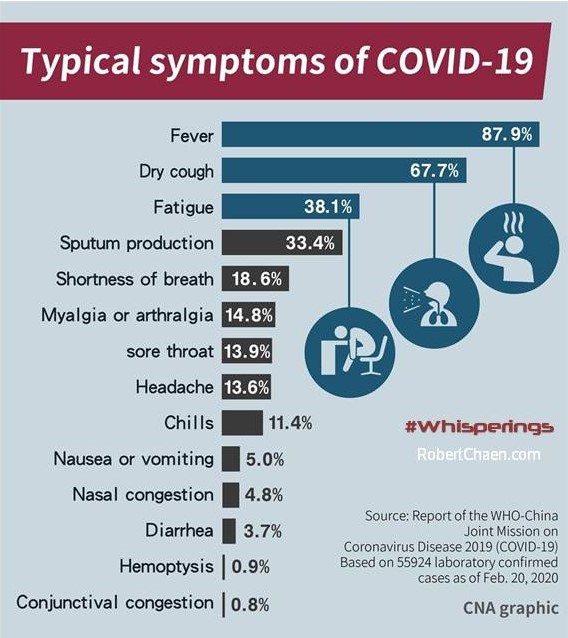 HIGH ALERT: The Symptoms of COVID-19