Brahma Kumaris god Shiva Baba has made 5 promises since his alleged incarnation in 1936, when Shiva Baba entered his chariot, Brahma Baba. Let’s find out if Shiva Baba’s 5 promises are true, false, or impossible to happen.

Shiva Baba’s supposed Five Key Roles are:
1. to incarnate every 5,000 years to start Confluence Age,
2. to bring about the end of the world and Iron Age,
3. to establish his Golden Age and heaven on earth in India,
4. to bring all souls back to his Soul World as the supreme soul,
5. to start the next identical 5,000 year Cycle with the reincarnation of BKs as human deities in his Golden Age i.e. the establishment of the ancient Deity Race, followed by the reincarnation of other less ‘pure’ non-BK human souls, and less pure world religions such as Zoroastrianism, Hinduism, Buddhism, Christianity, Islam, etc.

1. Will Shiva Baba bring all souls back to his Soul World?
Impossible. 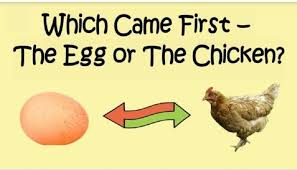 Which came first – the chicken or the egg, Krishna or Krishna’s parents, who will be the world’s first perfect human?

Brahma Kumaris can’t explain which came first the egg or the chicken, who will be Earth’s first perfect human deity: Golden Aged body of Krishna (the supposed reincarnated Brahma Baba, aka Adam, Adi Dev, first perfect man) or Krishna’s parents (do they have Iron Aged- bodies or perfect Golden aged-bodies?

How can Iron Aged bodies give birth to perfect Krishna without sex, and if Krishna’s parents were perfect, how did their own parents become perfect, born without sex, according to Shiva Baba? Totally confusing.

The 7 Dimensions of The Universe: Ghost & Angelic Realms, Karma, Hell & Heaven, Nirvana, The Afterlife & The Beforelife

2. Will Shiva Baba or drama bring “Doomsday Day” or the end of the world? Impossible.

For the last 5 thousand years of written history and through all the ages, religious founders including Christ, Mohammad, and Shiva Baba had predicted the end of the world or judgment day, but the end of Earth or doomsday day has never happened, or will not happen in the near or far distant future.

At least five separate extinction episodes have threatened life on Earth, destruction brought on by both cosmic bombardments and the planet’s own internal turmoil.

3. Will Shiva Baba or drama destroy all traces of Iron Age and Golden Age?
Impossible.

Shiva Baba claims that his Golden Age had happened before 5,000 years ago and every 5,000 years. Yet there are simply no traces or even a single proof of the perfect heaven in India in the form of historical heaven artefacts and palace ruins.

Moreover, Brahma Kumaris can’t explain how all traces of Iron Age i.e. Iron-aged technologies, internet, and world cities will all be totally destroyed and disappear with no traces at the end of Iron Age, then for world cities to be built identically again in the next 5,000 cycle, from scratch. How is it even possible?

4. Will Shiva Baba create Golden Age and make BKs into perfect human deities? Impossible.
Why? Because there were no perfect humans with no sicknesses and no wars living in a perfect heaven ever in the history of Bharat India.

In conclusion, my expert evaluation is Shiva Baba’s 5 promises to Brahma Kumaris are delusional, and absolutely impossible to happen.

The simple truth that Brahma Kumaris’ 5,000 years cycle is false.