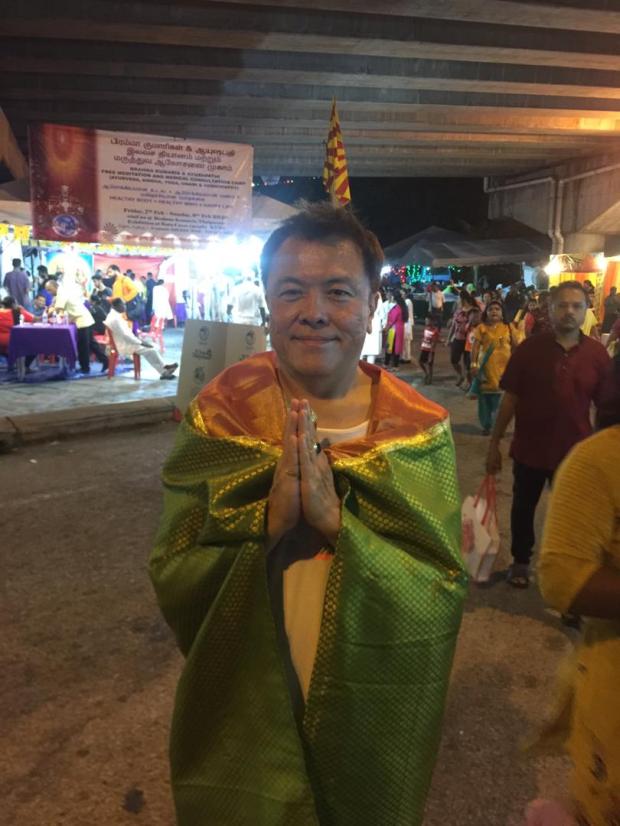 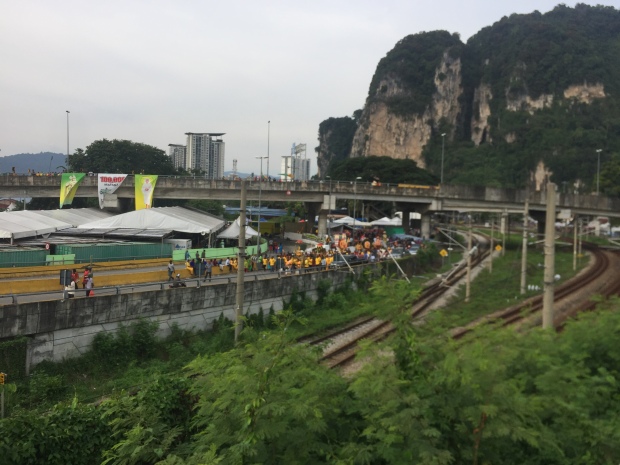 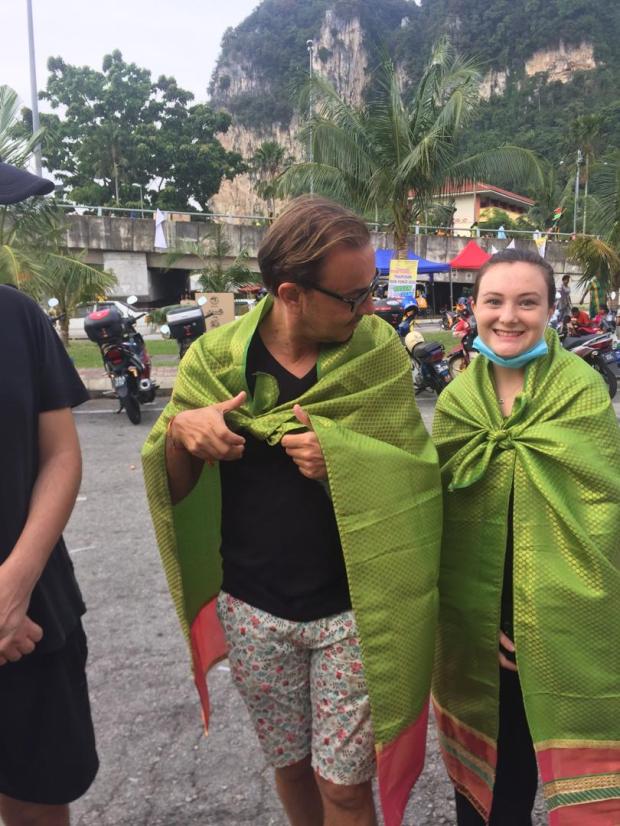 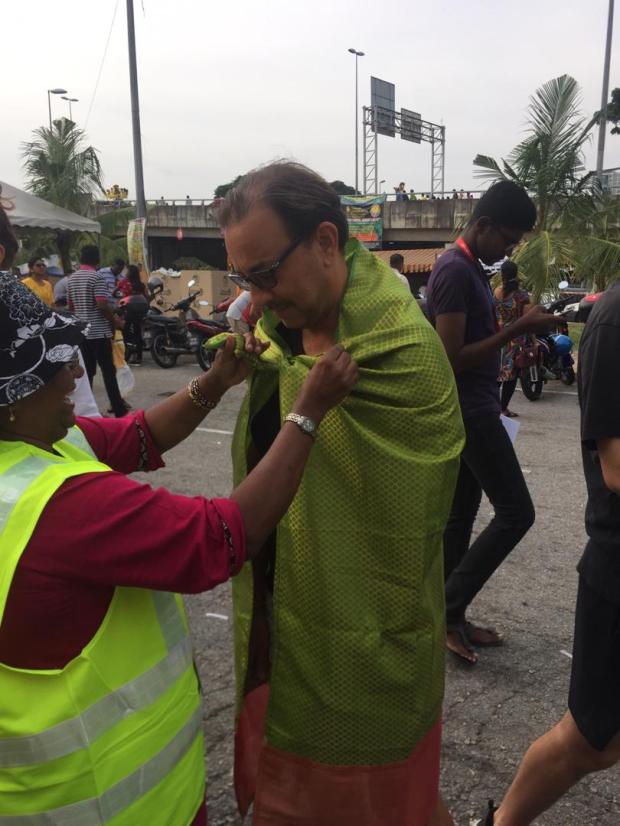 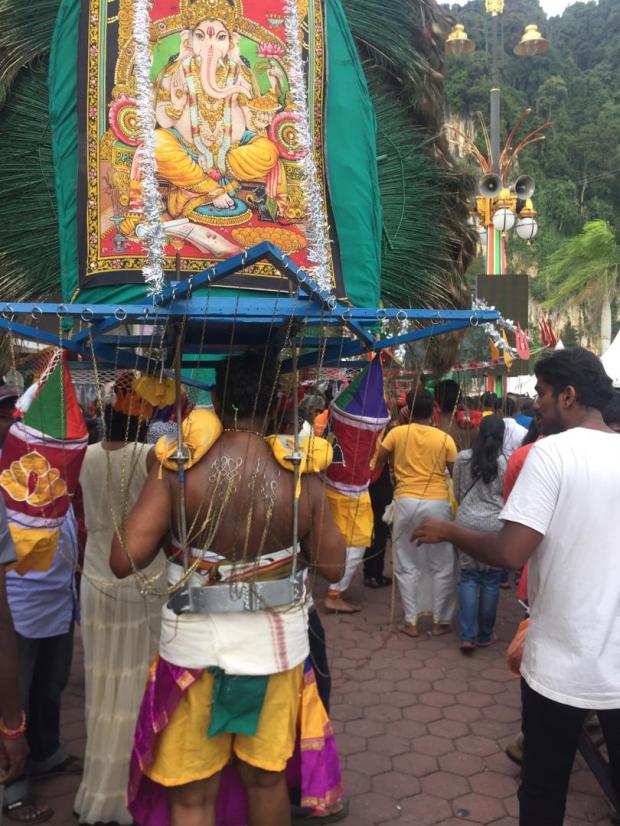 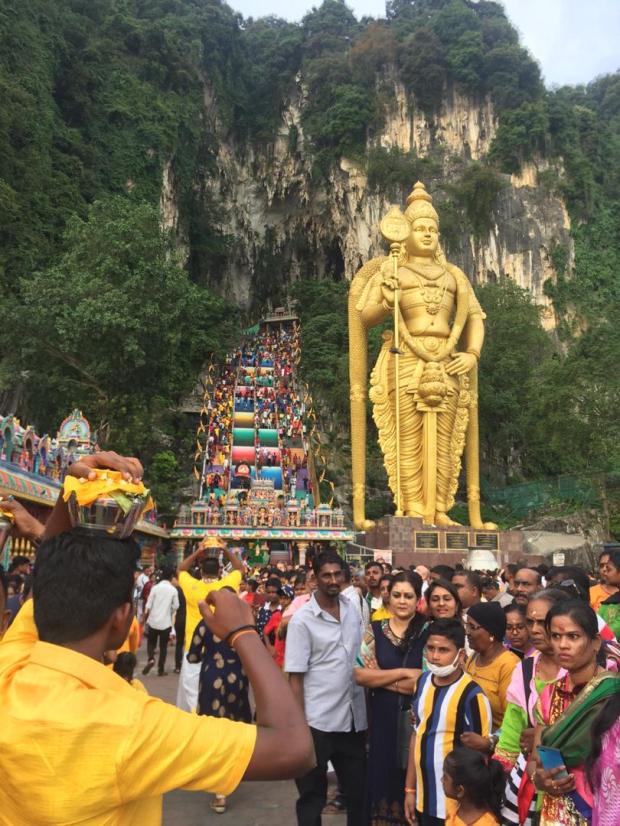 Taking rests on a stool along the Kavadi Dance pilgrimage penance journey, with a team of family supporters. (photo credit: Antonio Gallego from Spain) 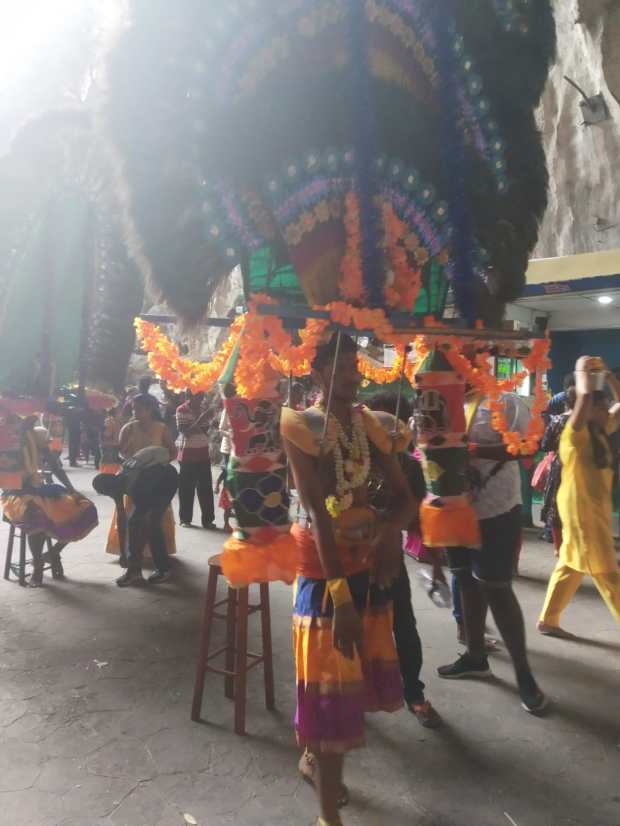 Lord Murugan statue, one of the biggest outdoor statues in Malaysia and the world. 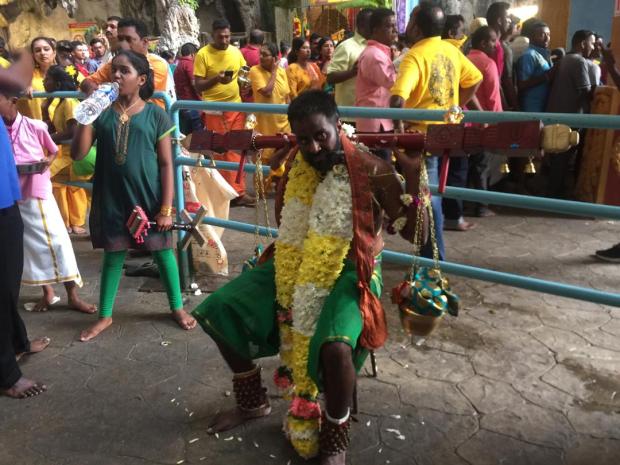 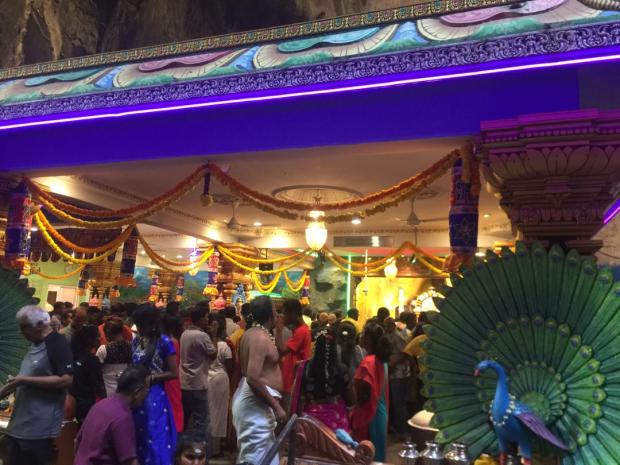 One of the oldest iconic cave temples in Malaysia.

Some people wanted to take photos with us. 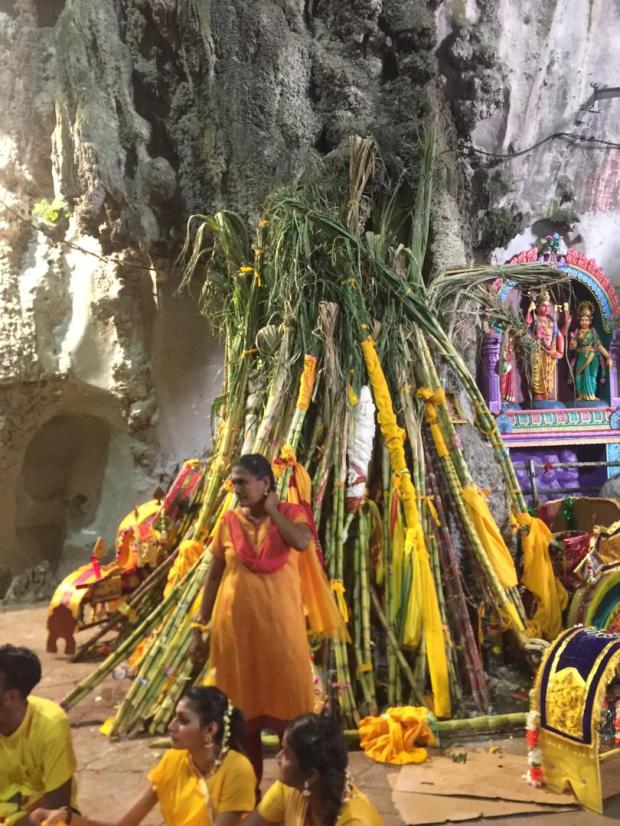 Releasing the multiple hooks from a devotee at the end of Kavadi bearing, in the main cave. 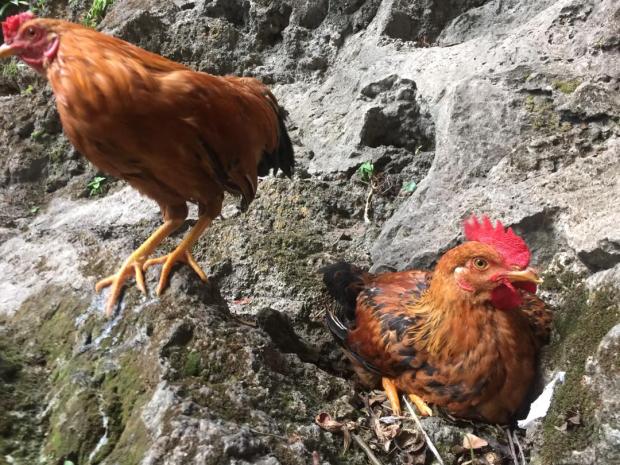 Chickens roam freely in Batu Caves, but no usual monkeys were seen as the crowds were huge.

Donations for the poor – put into saree folds 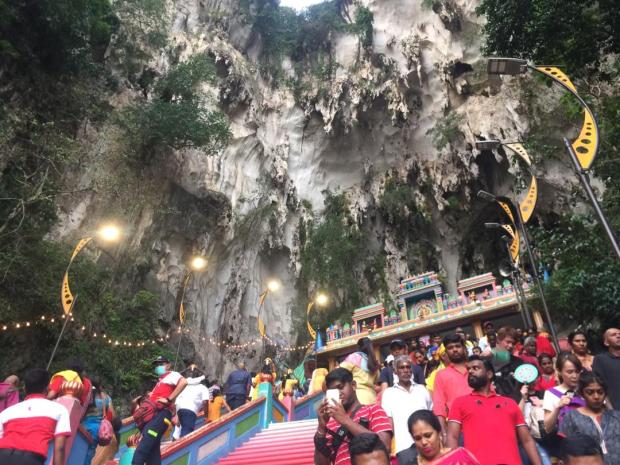 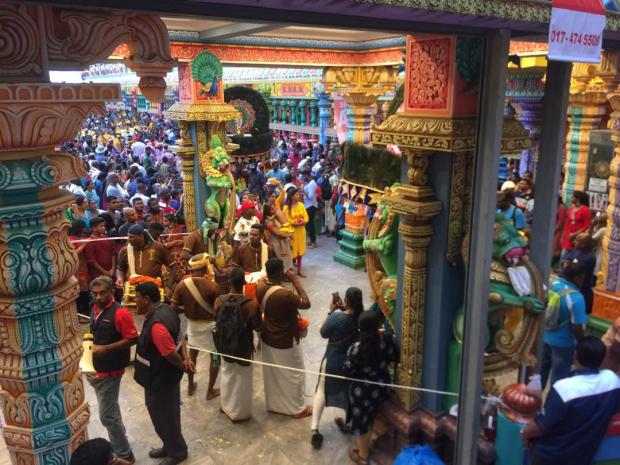 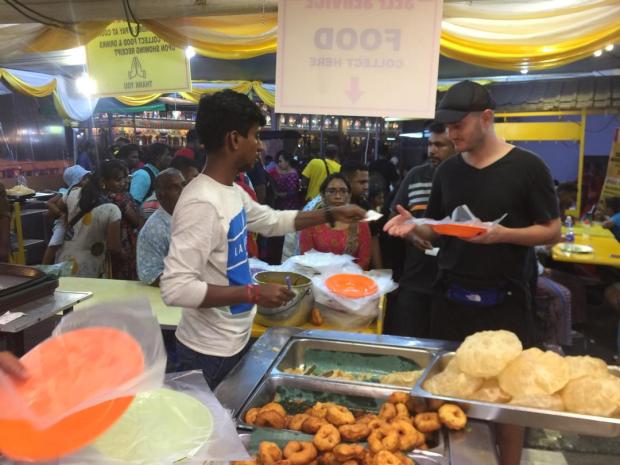 Antonio with a Spanish small fan for males. 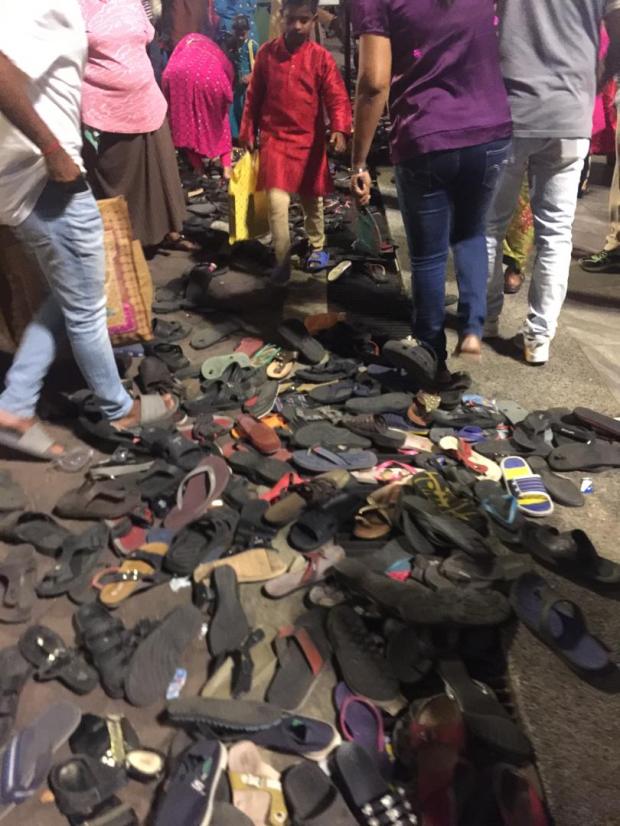 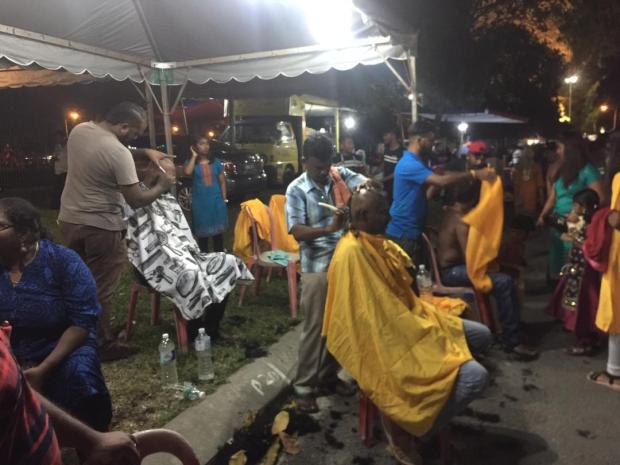 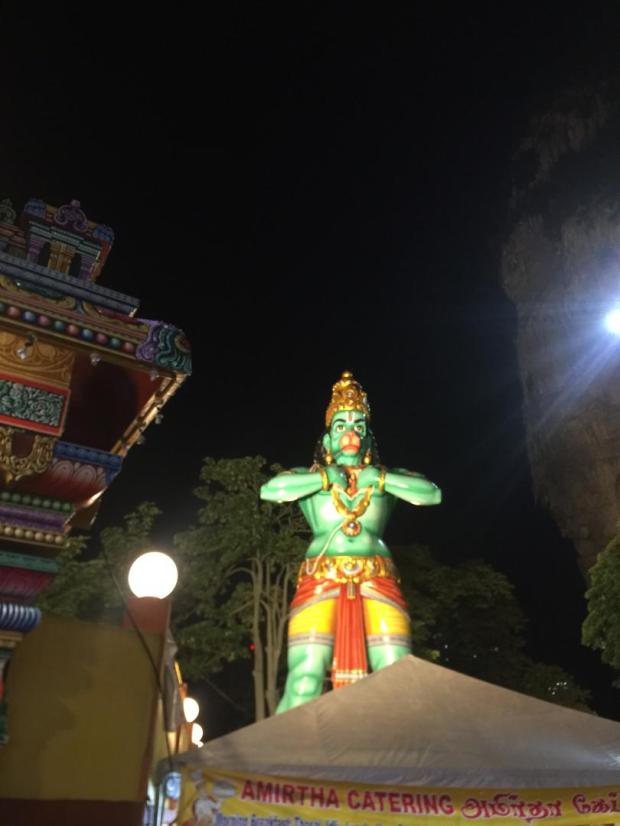 Hanuman, the Monkey God, showing Ram inside his heart.

Thaipusam Experience and Self Mortification at Batu Caves Temple. A Visual Tour by #RobertsTravels

There were spiritual feelings of Liberty-Truth-Light-Peace-Protection with no thoughts of Coronavirus (16 cases in Malaysia), fears, or wearing a mask in the crowds of up to 1 million at its peak.

I was touched by the respect my foreign friends French Alice Mercier and Aymeric Germain, and English Sally, and Spanish Antonio Gallego respecting local Hindu culture by wearing a traditional saree given free by some community group. Some people wanted to take photos with us too.

Thaipusam was a deeply spiritual experience for me and participants to witness the Kavadi bearers self mortification sacrifices and penances for prayers answered or asked, to feel the devotion of devotees and to see the family support of the next year’s Kavadi bearers in training without hooks

KTM commuter train is very packed and full, you will have to queue wait for a few rounds before you can board with 15-20 minutes intervals between trains. The Batu Caves KTM station is walking distance of 5 minutes from the main entrance. This probably the best option in hindsight, but I’m not sure if that is the case at the most peak of Thaipusam. We went on the second day of the 3 day Thaipusam festival at Batu Caves.

If you want use e-hailing you need to walk at least 1 kilometer from Batu Caves as e-hailing will not pick up at the entrance of Batu Caves. We walked along the highway and to some side roads for around 45 minutes, and ended up in Sri Selayang. E-hailing took 30 minutes to arrive, took another 30 minutes just to get out of the traffic jam in surrounding area, waiting taxis were charging RM100 to go to Bukit Bintang.

Thaipusam Festival: The Story of Murugan and Self-Mortification