No, I’m Hakka and my Mum’s mum was Penang Hokkien Nyonya.

I had fond memories of waiting way pass midnight to carve out pieces of a big full roast pig.

On the 8th day of the first month of Lunar calendar, it would be the special celebration known to Hokkien people as the “Phai Thien Kong” which literally means “praying the Heaven God”. The eighth and ninth day of CNY are especially important to Hokkiens because they believe it is connected with the birthday of the Jade Emperor, the king of the Heaven (Thien Kong) who protected the ancestors of Hokkien people from ruthless army in ancient China.

According to Taoism (Daoism), the Jade Emperor lives in the 33rd heaven and governs 33 heavens; so he is the king of heavens. To celebrate his birthday, Chinese prepare three bundles of long noodle, three tea cups with green tea, five different kinds of fruit and six different kinds of dry vegetables to worship Jade Emperor. But people also prepare five animal sacrifices, different sweet cakes and turtle cake (turtle is a symbol of longevity) on a different table for Jade Emperor’s guardian soldiers.

To show the sincerity, many people take bath on the 8th lunar night, and then wait for the first minute of 9th lunar day to begin the ceremony with their clean body. After the ceremony, Chinese explode the firecrackers. That’s why we can hear the scattered sound of fire crackers from midnight to sunrise.

During the massacre, all of the Hokkien people hid in a sugarcane plantation on the 8th – 9th days of Lunar New Year, coinciding with the Thien Kong and Jade Emperor’s birthday. This is why the Hokkien people offer thanksgiving prayers to him on midnight of the 8th and 9th day of CNY. Although these prayers are traditionally performed only by Hokkiens but more and more non-Hokkien people have begun to join in to pray for a good year ahead. 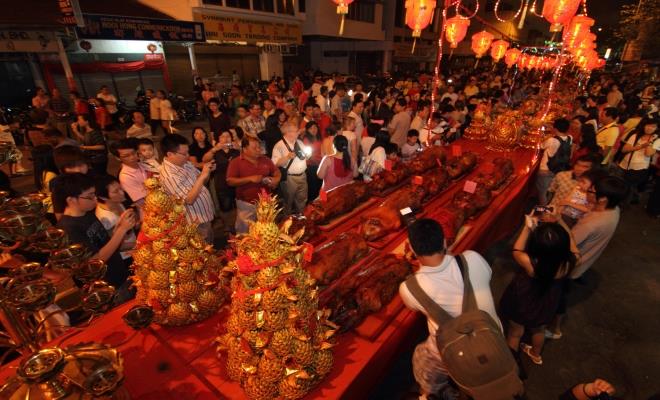 Sugarcane is symbolic of the Hokkiens hiding in a sugarcane plantation from massacre.

In Lunar calendar, the day starts at 11pm. And therefore all the Hokkiens start their prayers at 11pm on the 8th day of Chinese New Year but preparations start well in advance. On this night, the Hokkiens set up a table (draped in a red tablecloth) full of food which are to serve to the Jade Emperor. Some of the most popular items they must have are sweet cakes (thni kueh), red tortoise buns (ang koo), red-colored buns (mee koo), prosperity cakes (huat kueh) and bright pink miniature pagodas.

The Hokkiens made piles of Kim Cua (folded pieces of gold paper), these papers are hung from the sugarcanes before being burnt as a thanksgiving offering to the Thien Kong. After these gold papers are set ablaze, the family members then took the stalks of sugarcane from the altars (a pair of sugarcanes are usually used) and threw them into the flames. There will be fireworks and firecrackers that mark the beginning of the ninth day as well as the survival of the Hokkien people.

For a visual tour of the Pray to the Heavenly God “Pai Teen Kung” Festival, click here for a full photo gallery and videos: https://tinyurl.com/shot2dt

Here are some highlights:

Get blessing ritual: wipe holy papers 3 times in front of your head and 4 times at the back of your head.(write your name on the red paper only).

The Customs & Meaning of the 15 Days of Chinese New Year