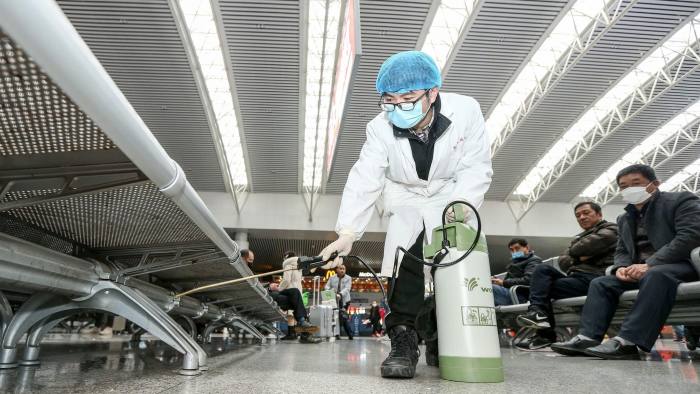 A leading Chinese virology expert has warned that the Wuhan coronavirus epidemic could be 10 times as bad as the Sars outbreak that killed almost 800 people around the world in 2002-03.

Guan Yi, director of the State Key Laboratory of Emerging Infectious Diseases at Hong Kong University, said in an interview with Caixin magazine on Thursday that after a brief visit to the central China city on Tuesday and Wednesday, he “chose to become a deserter” and left.

“My conservative estimate is that this epidemic could end up at least 10 times the scale of Sars [severe acute respiratory disease],” he said.

During the Sars outbreak, which was also caused by a coronavirus, 8,098 people fell ill around the world and 774 died, according to figures from the World Health Organisation (WHO).

As of midnight Thursday, there had been 17 deaths and 583 confirmed cases of the new coronavirus – named 2019-nCoV by the WHO. Hubei province, of which Wuhan is the capital, has accounted for all of the fatalities and 444 cases of the 571 confirmed cases in mainland China.

One of the reasons for the prediction was that authorities in Wuhan had missed their best opportunity to contain the spread of the disease, Guan said.

Although a travel ban had been introduced in the city on Thursday morning, the “golden time” to contain the virus had passed, as most of the people travelling home for the Lunar New Year holiday had already left, he said.

“They might have been in contact with patients in the community and still in the incubation stage when they left Wuhan. They are probably virus carriers on the move.”

On Wednesday alone, 299,600 train passengers departed from Wuhan, one of China’s busiest transport hubs, according to figures from the local railway authority. Information on the number of people who had left the city by air, road or river was not immediately available.

Guan said he expected the outbreak to peak over the weekend, as the virus had an incubation period of about eight days.

He said also that vital evidence that could have been used to trace the source of the virus had been destroyed when the seafood market in Wuhan – the epicentre of the outbreak – was washed clean.

Meanwhile, Chinese health authorities said on Thursday that the outbreak in Wuhan had become a full-blown community epidemic.

The Centre for Disease Control and Prevention (CDC) said in its latest report that more than half of the 198 infected people it had surveyed had never been to the seafood market in Wuhan, nor had they had any contact with infected patients.

Community outbreak is the stage in the spread of a disease when it expands from transmission within families and hospitals, to the wider community.

The epidemiological investigation found that 51 per cent of patients studied had neither visited Huanan Seafood Wholesale Market nor had contact with infected patients, the CDC said.

As predicted by Robren, the peak of the Chinese Communist Party was the massive 70th anniversary celebration in 2019 which was overshadowed by world news in Hong Kong. After that it will be downhill for President Xi Jinping and the Chinese Communist Party because of Wuhan virus, pork shortage, Uyghur human rights issue, Hong Kong protests, failure of one country-two systems for Taiwan, US-China trade war, and imminent Big Collective Karmic Debt calamities.

Side Note: The 1968 flu pandemic was a category 2 flu pandemic whose outbreak in 1968 and 1969 killed an estimated one million people worldwide. It was caused by an H3N2 strain of the influenza A virus, descended from H2N2 through antigenic shift, a genetic process in which genes from multiple subtypes reassorted to form a new virus. Because it originated in Hong Kong, the pandemic is also referred to as Hong Kong flu.

Prediction by Robren: Coronavirus will be the biggest China and world epidemic since Hong Kong Flu which killed one million people worldwide in 1968 and 1969 >> https://tinyurl.com/rvxg776

New Coronavirus may be here to stay as a ‘common flu’ but with 2% death rate. This can’t good.
At the same time in the northern hemisphere, it’s flu season. So far in the US, there have been around 15 million illnesses and more than 8,200 deaths, according to the Centers for Disease Control and Prevention.
Coronavirus may become ‘new flu’ but China cases continue downward trend.
* Chinese scientist warns Covid-19 may become an established illness, like flu as mainland reports its lowest
number of new cases since Wuhan lockdown began.
* Worldwide deaths reach 2,126, the vast majority in mainland China.
Wang Chen, president of the China Academy of Medical Science, said that despite the recent drop in the rate of new cases and fatalities on the mainland, the world should be prepared for the possibility that Covid-19 – the official name of the illness caused by the coronavirus – was here to stay.
Wang said the new coronavirus was different from the virus which caused severe acute respiratory syndrome (Sars), which was both contagious and fatal. “This new coronavirus may become a long-term disease that coexists with humans, just like flu,” he told state broadcaster CCTV on Wednesday.

Will Covid-19 topple China’s one-party regime and the fall of Xi Jinping?