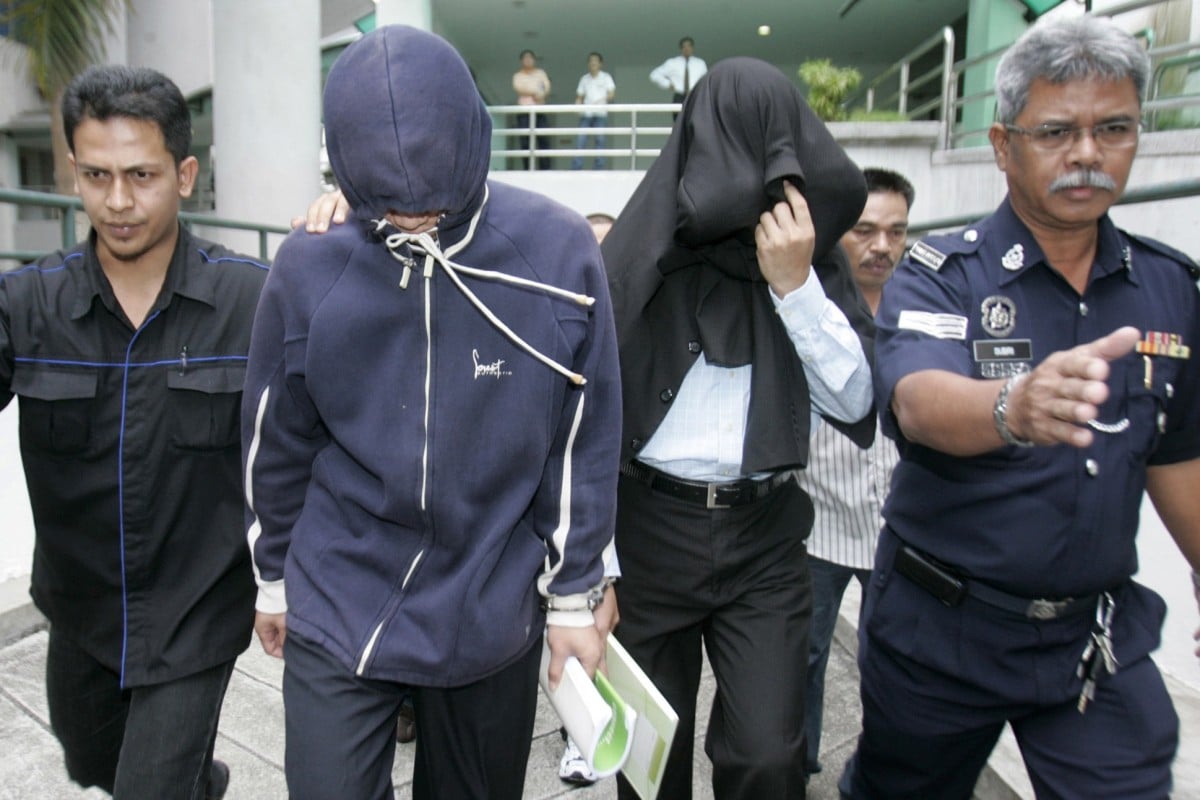 Policemen Azilah Hadri and Sirul Azhar Umar arrive at court. In 2009 both were convicted and sentenced to death. Photo: Reuters

Thirteen years after the murder of Mongolian model and translator Altantuya Shaariibuu shook Malaysia, one of two men convicted of killing her has claimed from death row that he was acting on the orders of the disgraced former prime minister Najib Razak.

In a statutory declaration published on Monday by the Malaysiakini news website, Azilah Hadri claimed Najib had ordered him to “arrest and destroy” Altantuya in October 2006, when the politician was the deputy prime minister and defence minister.

In an immediate response, Najib wrote on Facebook that the revelations were an attempt by the current Pakatan Harapan administration led by Prime Minister Mahathir Mohamad to ensnare him in a fresh conspiracy – and potentially have him detained without bail on a murder charge.

Police said they would decide on their course of action after reviewing the statutory declaration.

The former prime minister, defeated by Mahathir in elections last year, has long insisted that he has no links with the sensational murder of Altantuya. Speculation to the contrary, however, stained his nine-year stint as prime minister.

The model’s remains were uncovered weeks after her murder in a forested area, in a state that suggested it had been blown up by explosives.

In his statutory declaration, Azila said Najib had described her as a “foreign spy” and a “threat to national security”.

In a detailed account of the days leading up to the murder of Altantuya, he described how in one meeting Najib had told him to “shoot to kill” the model while making a throat-slitting gesture.

He said Najib had specifically told him to blow up the remains of Altantuya after her death, and instructed him to obtain explosives from the armoury of the police special tactics unit.

Apart from this, Azilah claimed Najib told him to be “cautious of the female foreign spy as she is a smart talker and is cunning – one of which (is for Altantuya to claim) she is pregnant.”

According to his SD, Azilah claimed Razak Baginda also asked him during this meeting if he remembered a woman he and the DPM met at the lobby of a condominium in London.

“I told him that I cannot remember her but I remember escorting the DPM and Razak Baginda from the hotel to the condominium. Razak Baginda then told me that the woman is the foreign spy which he meant,” he said.

Azilah claimed that when he saw the woman outside Razak Baginda’s residence in Bukit Damansara later, he remembered meeting her with the former and Najib at the London condominium.

Najib has repeatedly maintained that he had never met Altantuya and even swore this in a mosque.

Meanwhile, Azilah claimed he was “instructed, informed and believed” that the order for the covert operation came directly from the DPM and through his aide-de-camp at that time, DSP Musa Safri.

He averred in his affidavit that there was no personal motive or reason for killing Altantuya, but both Najib and Musa said the operation was “imperative for national security”.

“After the operation was carried out, I was given an assurance by Musa that any matter arising would be sorted out by the DPM as long as I did not involve his (Najib’s) good name.

“I humbly seek forgiveness from Altantuya’s family on what happened as I had no choice at the time, other than to follow orders,” he added.

“My purpose for disclosing the evidence and material facts [of this case] is not only because I feel I have been betrayed by interested parties but also to express the truth on what happened in the murder of Altantuya,” Azila said in the statutory declaration.

“I also hope that my colleagues in the [special tactics unit] and the police force will be careful in executing orders so that the issue of betrayal and being made a scapegoat will not recur.”

The 66-year-old politician is currently facing criminal trials for his role in the 1MDB financial scandal in which billions of dollars were plundered from state coffers between 2009 and 2014.

The Altantuya case was just one of several controversies that marked his stint in power.

Though Najib has claimed never to have met Altantuya, she worked as a translator for his close associate Abdul Razak Baginda.

She and Abdul Razak were widely rumoured to be romantically involved at the time of her death. She was said to have accompanied Abdul Razak on business trips made on behalf of the Malaysian government that involved controversial defence deals.

After she was reported missing, the police found her bone fragments near an isolated dam and traces of explosives nearby. Investigators concluded she had been shot twice and her body blown up.

Azilah was one of two policemen put on trial alongside Abdul Razak and accused of her murder. The court cleared Abdul Razak, but convicted Azilah and the other policeman Sirul Azhar, and sentenced them to death. Sirul later escaped to Australia while out on bail pending an appeal. Australia refuses to extradite him.

Malaysiakini reported that Azilah, who was sentenced to death in 2015, is seeking a retrial and has claimed suppression of evidence and material facts during earlier proceedings.

In the statutory declaration, Azilah said he had believed that Najib would assist him after the murder, including by protecting him from the law.

“I was confident I would be assisted by the [deputy prime minister] by all means, including that I would not be charged in court and would be protected from any issues arising from the operation,” he added in the statement.

#RobertReview: 10 : 10
Hitman claims Najib Razak ordered killing of model Altantuya Shaariibuu. The Ghost of Altantuya come home to roost. Who had the motive, power, and means to order the murder of Altantuya is obvious.