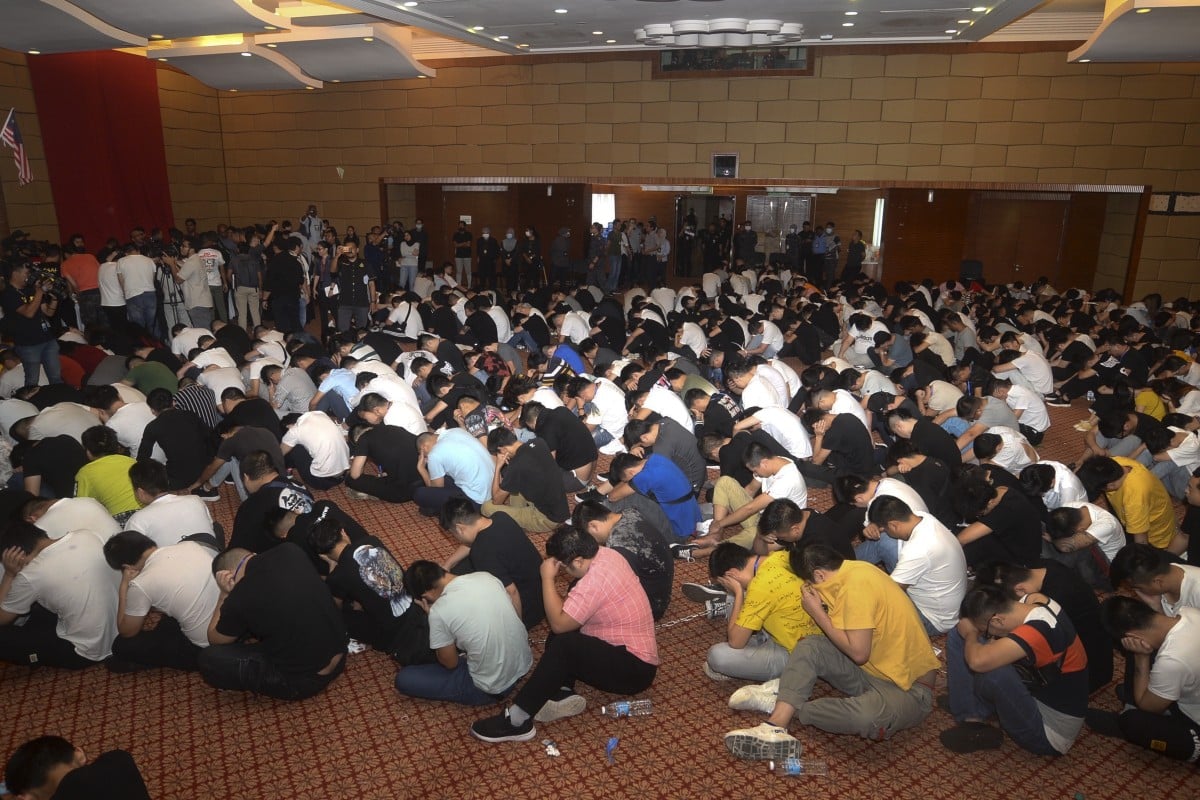 Some of the 680 people – said to be Chinese nationals – arrested by Malaysia’s Immigration Department in the raid on the online scam headquarters. Photo: AP

680 Chinese held in Malaysia over online scam targeting WeChat Pay users.
* Sophisticated operation in Cyberjaya duped victims in China offering fast returns on investments made via WeChat Pay or Chinese banks.
* 8,230 handphones, 174 laptops and 787 computers were seized and about 100 people escaped during ‘biggest raid of the year’.
In addition to the 680 Chinese detained, a further 100 people escaped as immigration officers approached the six-storey building thought to house the call centre.
“Some of them attempted to attack immigration officers … around 100 people managed to escape.”
Those detained had broken immigration rules, having entered the country on social visit passes and overstayed.
The syndicate is believed to be headquartered in China and its scam has been operating for around six months, according to the Immigration Department.
The scammers are thought to have targeted victims in China by offering fast returns through transactions carried out via WeChat Pay or Chinese banks.
This month, the Chinese embassy posted a notice on its website reminding Chinese citizens to obey the law in Malaysia. It said the embassy had received calls from Chinese citizens reporting that they had lost touch with friends and relatives who told them they were working in the tech industry or finance in Malaysia. Police believe many of these people had become involved in either telecommunications fraud or online gambling gangs, and some had been arrested, the embassy said.
In September 2018, police arrested 93 Chinese nationals and six locals in Kuala Lumpur for operating an investment scam in which victims in China were offered shares in publicly listed companies and promised handsome returns.
Last month, police in the East Malaysian state of Sabah arrested 80 Chinese nationals in a series of raids at almost a dozen luxury condominiums. They were operating what is known as a “Macau scam”, in which the caller impersonates an authority figure, such as a police or court officer, and seeks payment from the victim to avoid trouble.

The same month, police in the northern state of Penang caught 79 Chinese nationals operating a share market investment scam out of two mansions.