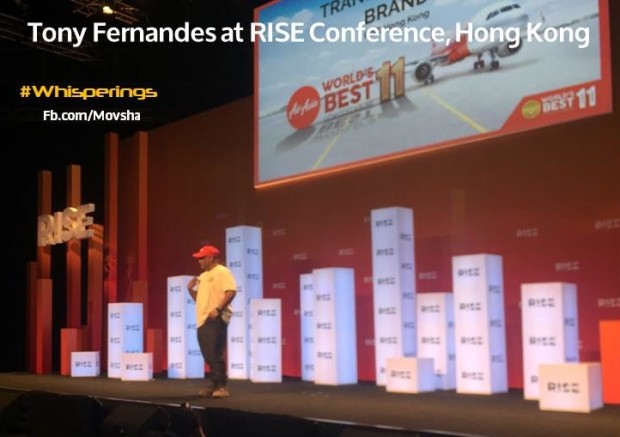 Tony Fernandes is a storyteller.
In interviews, he tends to stack them up.

It’s one of his best tales: how he bought AirAsia – two planes, massive debt – for a single Malaysian ringgit (about HK$2) in 2001 and turned it into an astounding success. Last month, when the Skytrax World Airline Awards handed AirAsia the title of World’s Best Low-Cost Airline, it was for the 11th time in a row.

When he appeared at the Rise tech conference in Hong Kong recently, he strolled onstage, hand in pocket, wearing a Supreme Martin Luther King T-shirt and a red baseball cap, and proceeded to address the standing-room-only crowd as if it were a bunch of mates. He has a comedian’s timing. “I told my wife I’m going to start an airline.” Pause. “She divorced me.” (Laughter.) He tailors his patter to his location. “Everyone thinks I’m Richard Branson, which I’m not.” Beat. “He wants to go to the moon and fly hot-air balloons. I want a beer in Lan Kwai Fong.” (Laughter.)

He updates his shtick. When he told his Hong Kong audience how he’d recognised a business opportunity during the Sars crisis of 2003, he said, “I know Malaysians well. They’ll risk their lives for a bargain – ‘800 ringgit? I’m not going! 80 ringgit? Who cares?’” (Laughter.) I’d read that line before in a 2013 interview; then it was 400 ringgit.

Towards the end he says, “I’ll tell you a little story.” It’s about his tuck box from his 1970s school days in England. Some years ago, an old friend found it and returned it to him. It still had three stickers on the side: Qantas, the F1 Williams team,West Ham FC. From the beginning, airlines, cars and football have been his life.

Once upon a time there was a little boy called Anthony who loved his mother so much that he associated Kuala Lumpur’s Subang airport with her return from business trips and, therefore, with happiness. She was a Portuguese-Eurasian music teacher, brought up in Malacca, who became a sales agent for Tupperware. Anthony was musical, too – he could pick out a tune by ear – and, as a child, he sometimes entertained guests at her Tupperware parties.

Anthony’s father, originally from India, was a doctor, working with the World Health Organisation to eradicate malaria and dengue fever. Although his parents shared almost the same name (father: Fernandes, mother: Fernandez) and a love of music, they were personality opposites. His father was reserved but his mother was gregarious – a born saleswoman – and eventually, she ran Tupperware’s business in Malaysia. As a result, in 1977, the Fernandeses could afford to send their only child, aged 13, 10,500km to school in England. Hence the tuck box.

“My mother was amazing, larger than life,” he says. “She was bipolar. And Roddy, my best friend at school, a very special guy to me – he took his life recently and he was bipolar. He was a brilliant cricketer, brilliant student, he became a master brewer and he never told me he was bipolar.

It’s a big campaign of mine. I’m using AirAsia to tell employees that mental health’s just another disease. We can’t put it in some cabinet and hope it doesn’t happen, right?”

Toughest time of my life. Tough, tough. That and my mum – toughest times.”

In his Rise speech, he’d listed the calamities that had befallen AirAsia (“Sars, bird flu, tsunami, terrorism, earth­quakes”) but not the crash. Why? “Sometimes there’s some­body in the audience who’s gone through that,” he explains. “The only thing I’m running from – the only thing I delib­erately don’t talk about – is the blue plane incident.”

This refers to his unwise decision, during the Malaysian election of May 2018, to paint one of his red planes blue to endorse then prime minister Najib Razak, whom he didn’t even like and who went on to suffer a massive defeat. As lose-lose situations go, it was a humdinger for which Fernandes felt obliged to issue a public apology.

“You don’t know what we had to go through,” he groans now. “When you have a gun to your head and you’re an airline you have to …” A gun? “Not literally a gun. But you have to work with every government … I don’t want to talk about it now.” Later? “Maybe.” He can’t help himself, how­ever, and on he continues: “They control rights, they con­trol airports, they control airlines, they control licences, they control tax.

What I never told the public is the one billion dollar tax bill shoved on us out of nowhere, suddenly …”

He wants to go off the record but I say no and ask if he’d like to go into politics. “Yeah, I’d love to!” He grins ruefully. The wicked spell – the curse, if you like – of the celebrity-politician clearly tempts him. “I’d be lying to say I’d never thought of it. But there’s too much compromise and I don’t have that character. I’d end up irritating everybody.”

In 2017, he remarried. (Characteristically, he met his South Korean wife, Chloe, in a restaurant in Paris, France.) His married life is very happy but here he is, out on the road once more. These days, he talks more about retire­ment, about stepping back.

In December, he’s opening a restaurant called Santan that will serve AirAsia’s food to terrestrial customers in Kuala Lumpur. He’s convinced his airline’s fare can become an international chain. Although he didn’t mention it at Rise, inside that old tuck box of dreams there was a dried-up packet of noodles. Maybe it too was waiting, like a handful of beans, to grow into a happy-ever-after.

AirAsia’s Tony Fernandes on 2014 crash and mum’s death: ‘the toughest times’ of his life

Tony Fernandes, the PR Opportunist: a Costly Lesson in Integrity