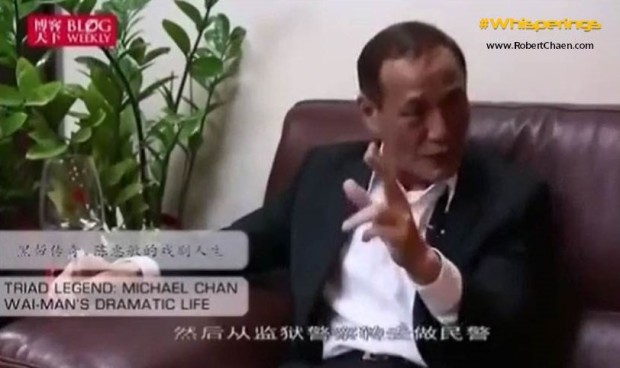 About Michael Chan Wai-Man:
Michael Chan Wai-man (Chinese: 陳惠敏; born 10 July 1946) is a Hong Kong actor. A Hakka of Wuhua ancestry born in New Territories, Chan was well known for various triad roles, when in actuality he had been involved with triads in real life. In a media interview, he admitted to have been the No. 2 the 14K Triad that dominated vice in Tsim Sha Tsui before the handover of Hong Kong. Having worked as a police officer in the prison system, he came into contact with many underworld figures and joined the Triads. Chan was expelled from the police force as a result of his links.

The Transcript from Video:

I started out as a correctional officer. Then from a correctional officer I became a regular cop – the kind that walks the streets nowadays. At that time it was the 60s era. In the 60s and 70s era, Hong Kong was terribly dark and very gloomy. In that era, if you didn’t already have an education, the majority of Hong Kong people came into the country illegally from Mainland China. Must uneducated.

In that era, we in Hong Kong called it ‘Let there be free expression.”

My time was before that though. I’m 68 this year. I learned the streets at the age of 16! That’s why I am considered a chief figure. The 60s and 70s era, police were gangsters, and gangsters were police.

All worked together to make money, you see. That era was Hong Kong’s secret society undercover joining the Police Force. That’s why in the 70s, 80s, and 90s, there were so many police officers who were also Triads. But now, they’re all retired, old, right?

Now, this era has progressed. The Triad’s way of doing things were way too excessive. In my era, the people of the underworld were about righteousness. Honor among thieves. Now, these current Triads are not Triads. There are hoodlums. They are thugs.

That’s because at that time, the whole ‘Tsim Sha Tsui’ was my territory. Go to Tsim Sha Tsui (urban are of southern Kowloon), that was Chan Wai-Man’s (my) territory. I’m speaking about yesteryears. Not now. Anybody who wanted to open a nightclub or whatever business in Tsim Sha Tsui, all you needed was my consent. If not, we’d do you in.

Now, if you touch anyone, the cops are called right away and you get arrested. Back then you couldn’t call the police. Because when I collected your protection fee, the police get a cut too. You think I’m kidding. I collect the fees and then I have to pay those plain clothes officers, right? Nightclubs and those kinds of businesses are considered ‘controlled’. Control the entertainment business, those kinds uh we all it wong, like the color yellow. Control the ‘organized crime’.

Back then, dance clubs were everywhere, drugs were everywhere, prostitution was everywhere. Now they’re all gone. Everyday, I go out with 10-15 bodyguards, 3 or 4 pm I wake up. Get up and go eat lunch. Finish lunch and then it’s evening. I go collect fees here, there and there. Simple as that.

It’s called Kimberley Road in Tsim Sha Shui – where the Miramar Hotel is. That time, the nightclub I opened by myself was on that street. That’s why the street the people in that era pretty much called it ‘Chan Wai-Man Street’. We’re there almost everyday. If I’m not there, all of my followers are there. All my guys are hanging out along the entire street. And if I step out and just call out, I think in around 3 seconds or so, about 30 people will gather outside and say, “What do you need, Boss? Give the order.” Like that.

You must be strict and enforce these rules. Now, these commandments are no more. Now, there is organization, but no rules. Our era before had organization and rules. Following the rules to operate. That’s why it is completely different. Now, these secret society members think of money first. Make money is first priority. Not about righteousness – as long as there’s money to make.

In my era, it was about righteousness. Making money was secondary. 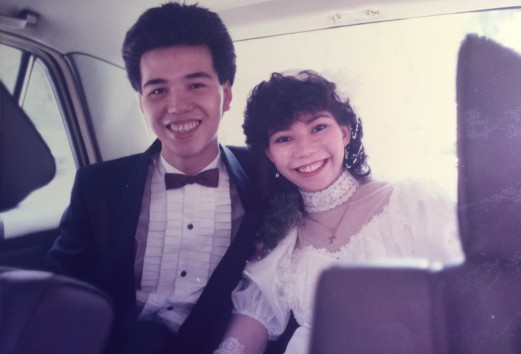 Brenda and her first husband: Tommy

Brenda had revealed to me that Tommy was involved in a Hong Kong Triad. She shared with me some stories about Triad Rituals.

My HAKKA-Peranakan “Chen-Yeap” ancestry lineage in Malaya is way much longer than Tun Mahathir’s Kerala ancestry. Those who don’t pay taxes should not BARK at those who are paying the most TAXES and contributions.