On May 15, 1996, publisher Leung Tin Wai was in his office in Quarry Bay, working on his new magazine, Surprise Weekly. Two men entered, saying they had photographs for publication. What they whipped out instead were choppers.

They slashed his back and lopped off both his thumbs as well as left forearm. It was all over within a minute, and the pair then fled.

Till today, 18 years on, Mr Leung, now 71 and a journalism academic, still shudders at the memory.

“It might have been because of something that I or my colleagues wrote. It was said that someone hired the triads to do it as we were investigating some businessmen.” Doctors reattached his forearm.

But the case was never solved. The police told the local media that members from two triads, Sun Yee On and Wo Shing Wo, could have been hired to carry out the hit. Suspects were arrested but released due to insufficient evidence.

The attack was merely one in a string on journalists, and Hong Kong suffered a disturbing deja vu last month when another attack occurred – this time, on the former chief editor of Ming Pao Daily, one of Hong Kong’s most influential newspapers.

Mr Kevin Lau was walking to his usual breakfast haunt when a motorcycle pillion rider lunged at him with a chopper. He suffered six slashes – one on his back was so deep it exposed his chest cavity and vital organs. But this was expertly executed so he did not die.

The attack has since thrown up various conspiracy theories. One is that people linked to Beijing who were irked by Ming Pao’s investigative journalism ordered the hit. Another says the daily had angered the triads, which took revenge. Yet another says it could be a personal feud.

Whoever the mastermind, the fingerprints of triads on the attack seem clear.

Beneath Hong Kong’s facade of gleaming skyscrapers, the underworld continues to thrive, those familiar with triad activities tell The Sunday Times.

The only difference is the form the triads take as the city’s economy and society evolve. Concerted crackdowns – a 1994 law strengthened the police’s powers – also mean that violence is mostly eschewed, with many hiding in plain sight within legally “grey” trades, ranging from milk powder smuggling to money laundering.

A police spokesman says Hong Kong has attained “notable successes in combating triads” and that triad-related crimes are at a low level. Last year, 2,035 such cases were reported, or 2.8 per cent of all crimes, down from 4 to 5 per cent before the 1997 British handover of Hong Kong to China.

It is thus difficult to estimate their influence. Past reports said there were 15 to 20 active triads. Four had 30,000 members each.

Triads in Hong Kong have always had a mixed repute.

They trace their genesis to the Hung Mun Society – formed in 17th-century China to overthrow the Manchu emperors – which Dr Sun Yat Sen was later associated with. Many members later fled to Hong Kong where they formed gangs motivated mainly by money.

But they have been feted where convenient. Seeking to maintain public order and to cultivate them as allies in the run-up to the handover, China’s Public Security Minister Tao Siju said in 1992 that some triad members were “patriots” and should be respected if they upheld Hong Kong’s prosperity.

Chinese patriarch Deng Xiao-ping made similar remarks in the 1980s and was under the triads’ protection when he visited the United States in 1979, criminology academic Lo Tit Wing, citing Mr Tao, wrote in his 2010 article Beyond Social Capital.

Adding a sheen of stardust to Communist-endowed legitimacy is the film industry. Brooding mobsters have long been romanticised in movies such as Chow Yun Fat’s A Better Tomorrow (1986) and Ekin Cheng’s Young and Dangerous (1996).

That triads have infiltrated the Hong Kong film industry is an open secret.

Triad-linked production companies have been known to threaten actors and directors who refuse to work with them, with popular Andy Lau among the targets, says a film industry veteran. Lau has been quoted as saying: “I can fight very well on screen, but off-screen, I can be beaten to death.”

Gongfu star Jet Li’s manager Jim Choi was shot dead in 1992 purportedly because he refused to sign his client to a triad-linked company.

Filmmaker Gordon Chan tells The Sunday Times he was “invited” in 1994 to a meeting at a hotel cafe with a leader of the Tai Huen Chai triad who asked him to make a movie. He turned down the offer.

“He was surprised because he was known for being brutal,” Chan says. “Yes, I was afraid. But the only way was to stand up to them.”

Among those who seem to be dogged by rumours of triad links is actor-producer Charles Heung who has been candid about his family’s links to triads in the past but has strongly denied personal involvement, according to a Reuters report. A 1992 US Senate sub-committee probe into Asian organised crime connected him to the Sun Yee On triad.

The entertainment community has held two marches protesting against the influence of triads in the industry.

One was in 2002 when tabloid magazine Eastweek published on its cover a photo of actress Carina Lau in the nude. It was said to have been forcibly taken after she was allegedly kidnapped by triad members.

The magazine’s then owner, movie mogul Albert Yeung who is the chairman of the Emperor Group, said he did not know the photos were being published. He sacked its editors and shut down the magazine three days later, before selling it.

Another was in 1992 after masked men with guns burst into a film studio demanding the negatives to a new movie. Five days later, actors, directors, writers and cameramen marched on the police headquarters demanding protection from extortion.

But as the film industry began to hollow out in the 2000s, the triads turned their attention elsewhere.

Initiation rituals have been simplified. Would-be members need no longer prick their fingers when a red-ink ballpoint pen can do the job. No more chopping off chicken heads; just smash some eggs.

Increasing integration with China means more competition from mainland triads in trades such as prostitution, says Ms Kwok. Extorting protection money from small shops is not possible now that they have been replaced by retail chains such as Watsons.

But adept as ever, triads have found richer pickings elsewhere, including in Macau’s casino industry.

And as Hong Kong booms as a financial hub fuelled by Chinese funds, money laundering has become a lucrative business, writes Prof Lo. “Eyeing this golden egg, some triad syndicates were clever enough to put aside drugs, guns and prostitution”, producing instead a new breed of suit-wearing managers.

Mr Lee says those lower down the food chain may work with money laundering syndicates from east Europe to open bank accounts.

The mainland also presents opportunities, but the going is more hazardous, given the need to navigate its byzantine maze of political contacts, says a film industry source.

When the government mandated in 2009 that old buildings need to be renovated every 10 years, triads formed renovation companies and bought units so they can influence the residential committee to appoint them for the contracts, says Ms Kwok. Intimidation follows if they do not get their way.

An evergreen fruit for the plucking is in the New Territories where triad-linked village leaders are known to form their own “fiefdoms”, says a government source. Here, they engage in their own activities, letting off firecrackers – banned in Hong Kong – during Chinese New Year, blocking roads and illegally occupying land and property. Some even enter politics, seeking election to the local district councils.

In 2012, a scandal broke when it emerged that the aides of then candidate for Hong Kong Chief Executive Leung Chun Ying tried to seek support for him at a dinner organised by Heung Yee Kuk, the rural council. Also at the dinner was a former Wo Shing Wo triad leader.

This “dual identity”, says Ms Kwok, poses the biggest challenge in rooting out triads in Hong Kong. “They may get involved in politics but what is the hat they are wearing when lunching with officials or local councillors? You cannot tell,” she says. “The deeper they hide, the more difficult it is to control.”

The police spokesman stresses that Hong Kong’s fight against triads remains a top priority and it is working with its counterparts on the Chinese mainland, Macau and other jurisdictions.

Investigations into the vicious attack on Mr Lau are exploring the case “from all angles”.

Will the assailants be caught? Perhaps. Even more important is the question: Will the people who ordered the attack ever be found?

Hong Kong politicians and celebrities, including Eric Tsang (from left), 1st row), Jackie Chan, Carina Lau, and film director Ng See Yuen, staging a protest march in Nov 2002 against Eastweek magazine for running a nude picture of Lau which was allegedly taken forcibly by triads after she was allegedly kidnapped. 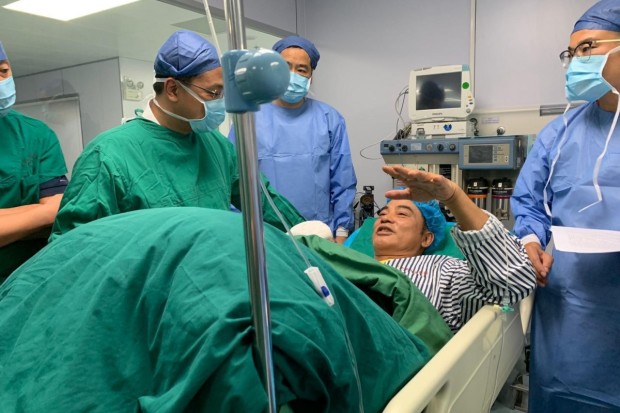 Attack happened as 64-year-old was attending the opening of a shop in southern Guangdong province.

The 64-year-old was a guest at the opening of a construction materials shop in the city of Zhongshan, Guangdong province, when he was stabbed in his stomach, according to various reports.

Witnesses were quoted as saying the actor remained conscious but was bleeding and had his hands clutched to his stomach.

The 4 Vices & Weaknesses Of Chinese Societies – “accepted” as a “Necessary Evil” around the world. It’s better to legalize it.