Five years on from the disappearance of Malaysia Airlines Flight 370, an Australian daily has alleged that Malaysian authorities withheld details of an investigation report which has been purportedly leaked online.

This includes, according to The Australian, the previously dismissed claim that MH370 co-pilot Fariq Abdul Hamid may have tried to use his mobile phone just minutes before the airplane disappeared from radar on March 8, 2014.

The daily claimed that this detail, which was kept from Fariq’s family, backed one of the many theories on the flight’s disappearance – that the captain of MH370 “hijacked his own aircraft after locking Fariq out of the cockpit.”

Fariq’s father Ab Hamid Md Daud was quoted by The Australian as saying that he was not informed of his son’s mobile phone detection by a telecommunications tower at Bandar Baru Farlim, Penang.

On April 12, 2014, sources told New Straits Times that Fariq had tried to call someone when the plane was flying low near Penang on March 8. The search for the missing aircraft was in its 37th day at the time.

Then-communications and multimedia minister Ahmad Shabery Cheek later said he was sure that Fariq did not attempt to make a phone call from the plane near Penang.

According to The Australian however, a police report from May 2014 “confirmed” that authorities knew about the detection of Fariq’s phone by April 24, but made no mention of it in a Factual Information Safety Investigation report released in March 2015.

“MH370 co-pilot’s mobile phone was reported as detected in Celcom’s mobile network in Penang by Sector 2 of BBFARLIM2 Base Station.

The daily also quoted industry experts who weighed in on details of the purported investigation report.

Among others, Tallinn University of Technology digital forensics expert Matthew Sorell said Fariq’s mobile phone appeared to have been switched on before the plane approached Penang.

Based on his analysis of the mobile phone network records as contained in the investigation report, Sorell claimed there was an indication of a “new location area update,” as the connection happened at the edge of the coverage cell.

“This means the phone was on, and responded automatically when it detected the cell signal over Penang.

“That ping occurs about 28 seconds after entering new coverage space, which is what would be expected in the case of a location-based update,” he said.

Earlier this month, the chief investigator in the searchfor MH370 refuted claims that his team tried to hide key facts in its reports.

“There is no reason for us to hide any key information… If I wanted to withhold information, do you think my seven counterparts from different countries would allow me to?

“None of them gave a dissenting view on it. People should read the report properly,” said Kok Soo Chon, the head of the Malaysian ICAO (International Civil Aviation Organisation) Annex 13 Safety Investigation Team.

100% Confirms what MH370 Captain Zaharie whispered to Robert Chaen as the Ghost Whisperer. 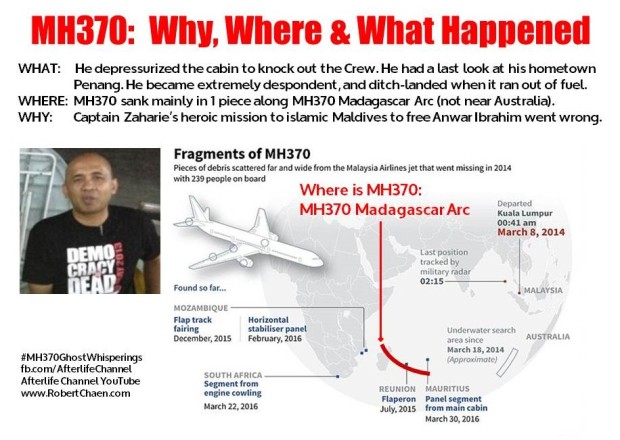 Read about >> MH370: The Shocking Clue WHERE, WHY and WHAT Happened. Dead pilots tell no tales: click here >> https://tinyurl.com/ybqax5mh

Australian daily 100% Confirmed MH370 Captain Zaharie Flew over Penang to have a last look at his Hometown – exactly how Zaharie Whispered to Robert Chaen, the Ghost Whisperer