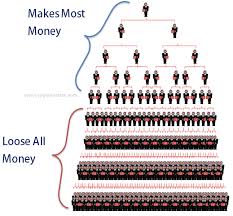 1. Just like a cult, MLMs offer the promise of a utopian-like existence (in this case making easy money working from home doing what you love, and making new friends).

2. Just like a cult many MLMs are led by a god-like figurehead, or have equally worshipped key figures high up.

3. Just like a cult they have unscientific, mysterious secrets to success (for example, mindset and the law of attraction). If you fail to be successful you’ll be told you had a negative mindset or just didn’t work hard enough – it’s always your fault, not the flawed model.

4. Just like a cult they encourage alienation from any dissenting voices, even from family and friends. So if a friend tries to make you see sense, you’ll be told they’re negative or jealous of your success.

5. Just like a cult they use unnecessarily complex structures to hide the truth of their business model. Hence PQVs and seemingly endless status levels, like ‘Purple’, ‘Diamond’ and ‘Crown Princess’.

6. Just like cults they use shame and fear to recruit. If you don’t join you’re a ‘wage slave’ trapped in a job you hate on the conventional work-retire-die treadmill.

7. Just like a cult they use fear to control. When one high status rep left, all her ‘friends’ in the MLM were warned not to talk to her. She was also discredited and slandered through the spreading of untrue rumours.

8. Just like a cult they have an authoritarian grip over their reps. If you question anything you’re shamed for not ‘believing’ or ‘trusting’.

9. Just like a cult they use the moral high ground as a cover or diversion – often by associating themselves with a charity or starting their own.

10. Just like a cult, MLM recruits often appear to go through a sudden change in personality. One example is the relentless positive social media posts they make. They are not allowed to be ‘negative’ (or even just real).

And finally, just like a cult, MLMs can only exist with unquestioning devotion. If you examine them using cold, hard facts (like their income disclosure statements) they just don’t make sense as a viable business proposition.

This is why they so often use emotion and deflection to shut down any argument. Just try to have an open, honest conversation with someone in an MLM, or the MLM themselves and you’ll discover how hard it is to get facts out of them!

Indeed, we have no doubt that if you show this to a friend in an MLM they’ll dismiss it as lies, rubbish or negativity. But ask them to factually rebut each point and they won’t be able to. They’ll tell you how amazing their own experience is, or that their MLM is different. But it’s not.

In weighing up who may be telling the truth just remember this: there is no financial or other incentive for us to lie to you about MLMs.

This article was inspired by a blog by Robert FitzPatrick, president of Pyramid Scheme Alert, a non-profit, non-commercial association to expose, study and prevent pyramid schemes.

RATING: #RobertReview (MLM): 9.5 |10
An excellent article on the inner workings of MLM and their deceptive get rich quick business owner MLM cult brainwashing.

Like-comment-share if you want to STOP the MLM Cancer.

My Working Experience with MLM Business Cults like Nu Skin and Amway, and the Mormon Cult Networking