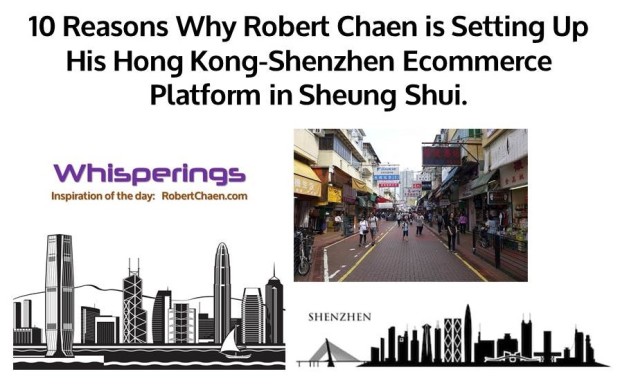 Even the Mainland Chinese “Parallel Traders” know that Sheung Shui is their best place to do business. They travel daily from Sheung Shui to Shenzhen to transport back to China baby milk ponder, cosmetics, pharmaceuticals, and Iphones.

2. The cost of living, office rental, food, and salaries are generally lower than the Central Business District. Many big MNCs had moved out of Central to other areas of Hong Kong Island (e.g. Quarry Bay) and Kowloon.

3. The air and quality of living are better in Shenzhen than right in the city areas of Tsim Sha Tsui or Hong Kong Island.

4. The food in Sheung Shui (“Liu” family clan) is vast with many home-grown food cottage outlets – second only to Yuen Long, the biggest Chinese Ancestry Village district in Hong Kong (with “Tang” family clan). Yuen Long is further from the Lowu border crossing.

The following reasons apply to the whole of Hong Kong in general (not specifically to Sheung Shui):

5. Free society, free economy, democracy and rule of law in general in Hong

6.. Meritocracy and equal opportunity ethics.
There are no racial and religious discrimation like for Chinese Malaysians in Malaysia.

8. A totally secular country is the best for citizens, residents, foreigners and people of all religions.
Compared to Malaysia where there are heavy pressure for organizations to comply to Islamic requests for a separate Surau Muslim prayer room, washrooms with bidets, or
the high possibility of being charged by Malaysian Religious Police for “Khalwat” or close proximity when a female Muslim is alone with a male colleague or male employer-boss.

10. The unique blend of “East Meets West” Culture which is unbeatable in synergy, fun, excitement, variety, and one of the World’s biggest Foreign Expat Communities – more vibrant than Singapore.

Robert intends to be an unofficial ambassador for Sheung Shui for the Silicon Valley of Hong Kong to match neighbor Shenzhen as China’s Silicon Valley.