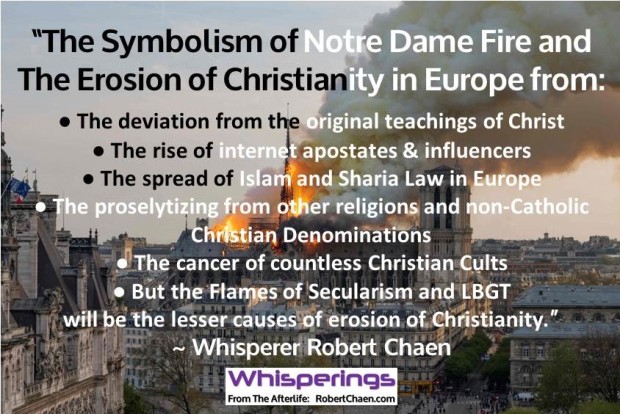 As usual whenever there is any natural or man-made disaster, religious leaders, conspiracy theorists, doomsday cults, politicians, and armchair trolls will read into the countless meanings and symbolism.

Father Joseph Gill the Diocese of Bridgeport wrote that “The flames of secularism seem intent on destroying it (Christianity)”. See text below.

As the Angel Whisperer, here are my whisperings on Notre Dame Fire:

Today, I can do no better than cite three reflections I found on Facebook regarding the tragic Notre Dame fire:

First, what survived from the fire? The cross, the altar, the Crown of Thorns. Consider this for your own life – when our lives will be burned up and everything turned to ash, what will survive? Will it be the Crosses that made you holy, the altar where you offered yourself to God as a living sacrifice, the Crown of Thorns in humility you wore, that you may be worthy to wear a glorious crown of gold?

Second, the outside of the church looked completely destroyed, while the inside remained intact, though damaged. A fitting metaphor for the universal Church. To the rest of the world, it looks as if the Church will be completely destroyed. But to those on the inside, we know that, while damaged, it can never be destroyed!

Finally, the fire at Notre Dame is a powerful symbol of what is happening to Christianity in Europe – and soon to be in the United States. The flames of secularism seem intent on destroying it. Will a new generation rise up to save, not their cultural heritage, but their very Faith itself?

The Symbolism of Notre Dame Fire and The Erosion of Christianity in Europe from:

• The deviation from the original teachings of Christ
• The rise of internet apostates and influencers (will erode all religions and cults)
• The spread overpopulation of Islam in Europe
• The proselytizing from other religions and non-Catholic Christian Denominations
• The cancer spread of countless Christian Cults
• But the Flames of Secularism and LGBT will be the lesser causes of erosion of Christianity.
The inclusion of LGBT into Catholicism may actually enhance Christian population (read the new rule of Mormons)

Listen to Robert’s Soundcloud on this topic:
https://soundcloud.com/robertchaen/the-symbolism-of-the-notre-dame-fire-and-the-erosion-of-christianity-in-europe

Robert Chaen is an Angel Whisperer since Brenda his wife and Twin Soul communicated to him 2 hours after she crossed over to The Afterlife. Angel Brenda is the Angel with the most Afterlife Signs.