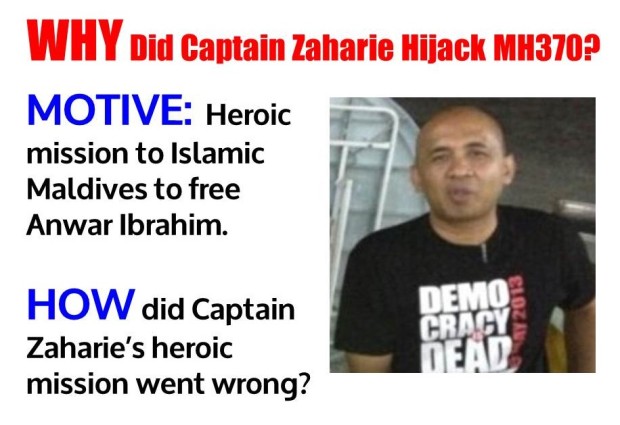 #6  If you are not MALAYSIAN, you will probably not understand why so many Malaysians were extremely upset and despondent when the then Opposition Leader Anwar Ibrahim was ridiculously charged for sodomy for the second time with a 5-year jail sentence on 7th March 2014 – a day before MH370 disappeared.

Like many Malaysians, Captain Zaharie was extremely disappointed when opposition leader Anwar Ibrahim did not win the 13th General Election (GE13) held on 5th May 2013, even after winning the popular vote. 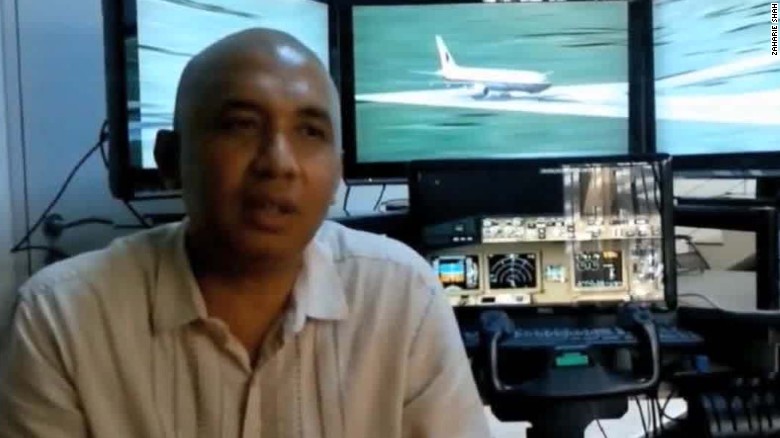 Right after GE13, the Captain Zaharie initially planned to hijack a MH plane to Maldives to bring world’s attention to Malaysia to pressure Najib Razak to resign. It was well documented that his home had home flight simulator where flight simulation to Maldives was logged for nearly ten months in 2013-2014 period.

But the 5-year jail sentence of Anwar Ibrahim news broke the camel’s back.
Within less than one day it triggered Captain Zaharie to hijack MH370, plan to land in Maldives (the only sympathetic Islamic island-country in the Indian Ocean), and bring the world’s dramatic attention to FREE Anwar Ibrahim.

Captain Zaharie Tee Message: DEMOCRACY IS DEAD. 5 MAY 2013. Like many Malaysians, Captain Zaharie was extremely disappointed when opposition leader Anwar Ibrahim did not win the 13th General Election held on 5th May 2013, even after winning the popular vote. Read The Herald article.

Most foreigners and foreign aviation experts miss this vital clue of that Captain Zaharie was a Penang relative and a strong supporter of Anwar Ibrahim. If you miss this point, you’ll miss the MOTIVE behind WHY Captain Zaharie hijacked MH370.

When Robert Chaen was in Malé to train the top management of the Auditor General Office, Maldives in 2016, he sensed and re-confirmed Captain Zaharie’s MH370 hijack plan to fly to Maldives.

Nearly ALL pilot suicide air crashes happened very quickly within LESS THAN 41 MINUTES AFTER TAKE-OFF. Why did Captain Zaharie bother with the countless complications of flying more than six hours if it was simply suicide.

Three Case Studies of Pilot Suicide and their Motives:
Germanwings 9525 Andreas Lubitz deliberately crashed the plane after locking out his Captain on 24th March 2015 – 40 minutes after take-off.

WHY did Captain Zaharie flew for more than six hours, switched off all transponders within two minutes of his last air traffic control message, made no Mayday distress calls, flew pass his hometown Penang for one last look, and seemingly avoided air traffic control RADAR. WHY?

MH370 was NOT Pilot SUICIDE, but a HEROIC MISSION went wrong.

MH370 was Not Pilot Suicide. WHAT was Captain Zaharie’s MOTIVE to Hijack MH370?

WHERE MH370 Ended? The Madagascar Side of Indian Ocean (Not Australia side): https://tinyurl.com/yc47zyzv

WHAT Happened to MH370? The Ghost of MH370 Captain Zaharie Whispered: https://tinyurl.com/ycu2h2sw

Revealing The Untold Story of how 50 Foreign Exchange UiTM Students were saved from MH370: https://tinyurl.com/ycmzok4n