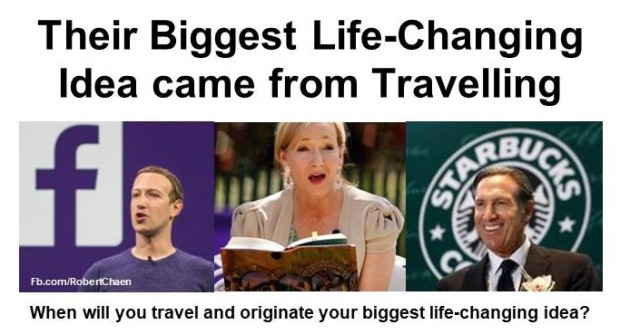 4. Steve Jobs (Apple) – one of two or three most important things he had ever done in his life from traveling on a pilgrimage to India (age 23).

5. Mark Zuckerberg (Facebook) – Steve Jobs recommended him to travel on an Indian pilgrimage “was an important part of our company in early years” (age 24).

6. Christopher Columbus (Discoverer of the New World) – considered by others to had sailed “off the edge of the earth to his death” (age 41).

7. Benjamin Franklin (Founding Father of America) – ran away from home and voyaged to London and France (age 17).

These people are no smarter or talented than you are. At the time, some had little or no money at all. They still traveled and observed the world around them. They decided to have a big dream and accepted their ability to turn it into a reality. They have made a fortune.

But it is nothing in comparison to the gold mine in every cemetery. All these ideas and dreams that could have forever changed the world. Each a gift to humanity – buried in fear and doubt.

[Text, Video Credits:
It pays to travel by Global Degree. 195 countries in 60 months. Every moment captured on film]

When will you travel and originate your biggest life-changing idea?

Written by Robert Chaen,
CEO of ChangeU, Thinker, Writer, Speaker and Whisperer
Published on 2nd August 2018.
Updated on 30th August 2018.
Copyright 2018 ©Share this post.
Like our pages:
http://www.RobertChaen.com
fb.com/RobertChaen
Youtube:
SHARE this article.
You are most welcome to share this article in your social media or website with only 1 term & condition: acknowledge this http://www.RobertChaen.com source and author Robert Chaen