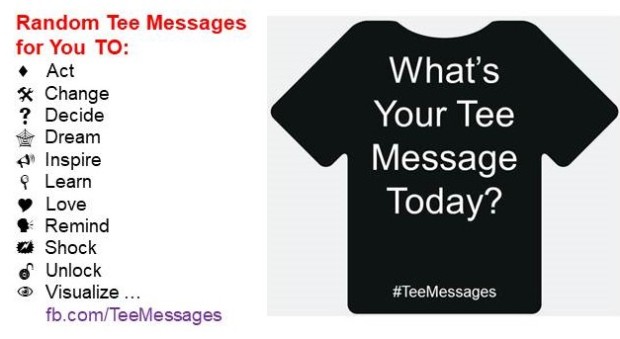 Random Tee Messages for You

Stranger’s T-Shirt Messages that Speak to You.

Random Tee Messages for You To:

#TeeMessages was originally inspired by the Founder Robert Chaen’s own experiences on 11 July 2018. A visiting “mysterious mirror couple called RayVan” challenged Robert for 3 days and nights to deal with his attachments to his late wife Brenda José, and his addictions; and master and learn from his Karmic life lessons

They sat and ate at the busy touristy food street called Jalan Alor, Kuala Lumpur, and did a Law of Attraction ritual of asking for a Sign from t-shirt words they saw passing by.

Within less than 3 minutes Ray alerted us about a clearly obvious t-shirt. Robert was stunned to find answer to his question about being attached to his late wife Brenda Jose with the random t-shirt words: “Ashes of the wake”. What a dramatic, irrefutable first T-Shirt Sign Form the Other Side!

Robert thought he had let go of Brenda completely, but he was in deep denial that he was still attached to the ashes of the past: Brenda’s wake (a watch or vigil held beside the body of someone who has died, sometimes accompanied by ritual observances)…

Robert Chaen is currently writing a love and spiritual novel based on his true story, beginning with a random t-shirt words…