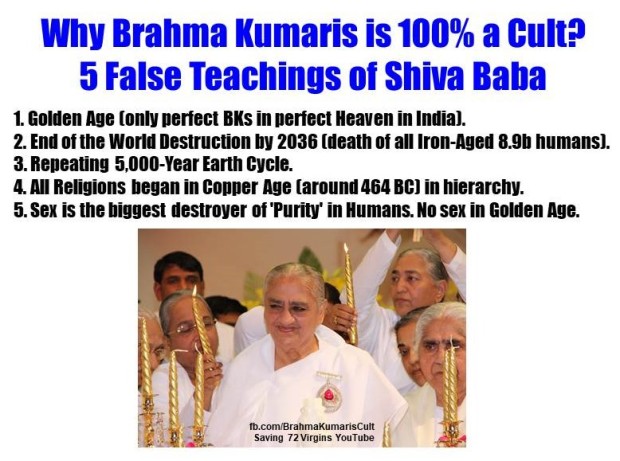 Why Brahma Kumaris is 100% a Cult?
5 False Teachings of Shiva Baba – proven.
This article is about the proof of the weird, outrageous, false teachings of Brahma Kumaris – followed blindly by normal, rational people like doctors, professionals, lawyers, and public figures.

There are many professionals, politicians, professors, actors, singers, celebrities, lawyers, doctors, scientists, and engineers who are BKs yet when it comes to Shiva Baba’s teachings all their logic goes out of the window into a delusional, nebulous world of make belief, fantasy, and false hopes of a 2,500 years of golden age and a silver age when there will be no vices, no crimes, no police, no courts, no military, no wars, no sex (golden age viceless deity-like humans reproduce through yoga power), no carnivores (lions, all animals and insects are vegetarian), no accidents, no suffering, no pain, and no sickness HERE ON EARTH… and this history repeats itself every 5,000 years IDENTICALLY.

[Cult Analysis: Either BKs are mad to believe in such obviously false beliefs, or BKs have blind faith]

BKs are daily “intoxicated” (Baba’s favorite word in Murlis) and high on their faith in Baba’s teachings. Who won’t be high and intoxicated if they are daily told and brainwashed that they will be highest, ‘purest’ humans on Earth, worship-worth Deities who will rule Earth (actually on in Bharat) for 2,500 years.

BKs like to argue that because there are professionals, doctors, scientists, and professors who are BKs, therefore it proves that BK religion is legitimate. It’s like saying ISIS, or the Nazis had professionals, doctors, scientists, and professors, so ISIS,  Hitler and the Nazis were legitimate and good people. Hitler was a vegetarian, and copied and reversed the ancient Swastika symbol to be his icon. Being a vegetarian doesn’t mean one has good morals and won’t kill a few million people.

Read how ridiculous false these BK beliefs are.

Help to stop the Brahma Kumaris Cult Cancer from spreading. Show BKs this article and this website.

5 False Teaching taught by the fallen Twin Souls Shiva Baba & Brahma Baba – proven
Most verbs written in this article is in the present for easy description, rather than repeated every statement with “BKs believe…”

1.  Golden Age (only perfect BKs in perfect Heaven in India):

● Only BKs and no one else will be at the start of the Golden Age (in 2036) – only 00,000 BKs reincarnated in their purest form.
[ Cult Analysis: This “all exclusive BKs” can only inherit Heaven is a 100% sure sign that BK is a Cult, a dangerous doomsday cult. ]

● The first 100% pure, viceless human being is Krishna who is actually Brahma Baba incarnated as Adi Dev (aka Adam, the Earth’s first perfect and viceless human).
[ Cult Analysis:  WHO are pure enough to give birth to baby Krishna and the pure 900,000 reincarnated BKs by 2036. Won’t sex taint the first generation of golden-aged deities in 2036? BKs can’t answer this question. ]

● The Golden Age will begin in year 2036 – 100 years after Shiva Baba reincarnated into Lekraj / Brahma Baba in 1936.
● There is no vices, no crimes, no sex (golden age viceless deity-like humans reproduce through yoga power), no carnivores (lions, all animals and insects are vegetarian), and no sickness in Golden Age. 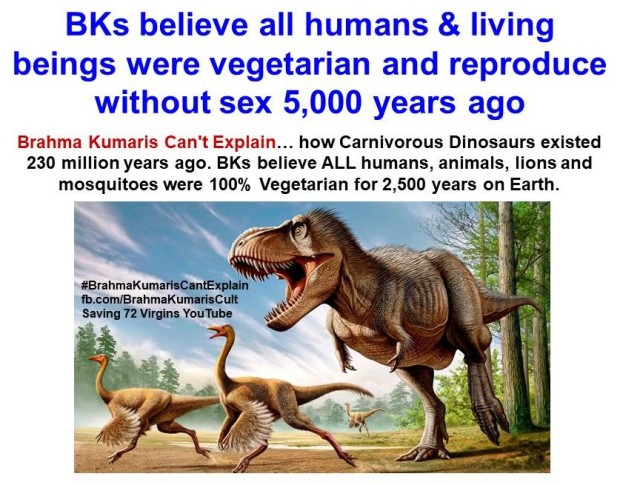 ● Golden Age exists only in Bharat or India, and no where else.
[ Cult Analysis: never ever in the history of Earth, has Earth ever been Heaven with no suffering, no carnivorism, no mosquitoes, no dengue, no viruses, no volcanoes, no tsunamis, no hurricanes – perfect weather, perfect humans, perfect animals in Bharat. Until today BKs can’t explain how dinosaurs existed 230 millions years ago.]

● The rest of the world outside Bharat (India) had no human beings, no civilizations.
[Cult Analysis: BKs can’t explain how Nethanderthals, and the 3.6 million “Little Foot” human fossil exist past BK’s 5,000 years historical cycle. ] 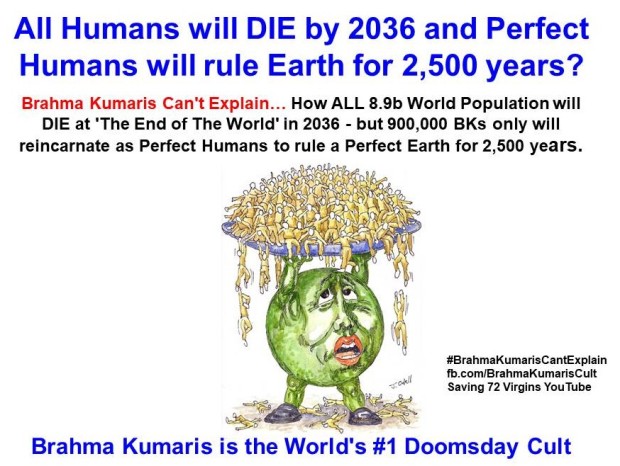 ● All of Iron Age will be 100% destroyed with NO traces of Iron Age during the Golden Age i.e. Internet, airplanes, buildings (e.g. Eiffel Tower will be destroyed completely at the end of Iron Age and rebuild again identically in Iron Age, every 5,000 years), flag on the Moon, nature (the Grand Canyon will erode until 2036, and return back to its 5,000 years ago form as in 2,964 BC, then erode exactly to the next 2036 form, every 5,000 years), sunken ships (the Titanic will 100% disappear after 2036, then gets rebuild and sink again in 1912 in the same location, same time, same people, every 5,000 years). You can now see how ridiculous BK beliefs can be.

● If destruction must happen in 2036 as predicted by Shiva Baba, WHY are BKs still building bigger and bigger buildings in their headquarters Madhuban, and centres around the world. It just don’t make any sense except that Shiva Baba wants BKs to give all their wealth to him, Dadis, and BK centres.

[ Cult Analysis: ● This means all BKs must die and be born again by 2036 – in 18 years’ time, plus the then estimated 8.9 billion “Iron-Aged” world population must all die by 2036.
I don’t think BKs have even pondered about this let alone realize the major implications of this massive death, even of BKs themselves. Because if they do realize this false Baba’s teaching, most BKs will leave gyan and the BK religion.

● HOW will all BKs and all of humans (except the few millions who will give birth to the 900,000 reincarnated BKs) going to die in such impossible massive numbers?
Shiva Baba has a ready answer – through 3 ways: 1) nuclear war between Russia and USA  2) civil wars  3) natural disasters – this must be Earth’s most massive natural disasters to kill ALL Iron-Aged humans.

● Earth’s Ultimate Apocalypse by 2036.
Every single Iron-Aged human must die, NO ONE escapes as you can’t have any Iron-Aged humans roaming among the golden-aged humans. Because these imperfect Iron-Aged humans still have the Iron-Age capacity to kill the perfect, viceless Golden-Aged humans.
Do BKs actually believe that not a single one Iron-Age human can escape and survive the end of the world destruction?

● NO natural disasters, asteroids, pandemics, civil wars and nuclear wars combined can kill ALL Iron-Aged humans. BKs must be delusional to believe that.

● Isn’t BKs the ultimate Doomsday Cult to predict nearly all human beings (except the 900,000 reincarnated BKs) will die by 2036? 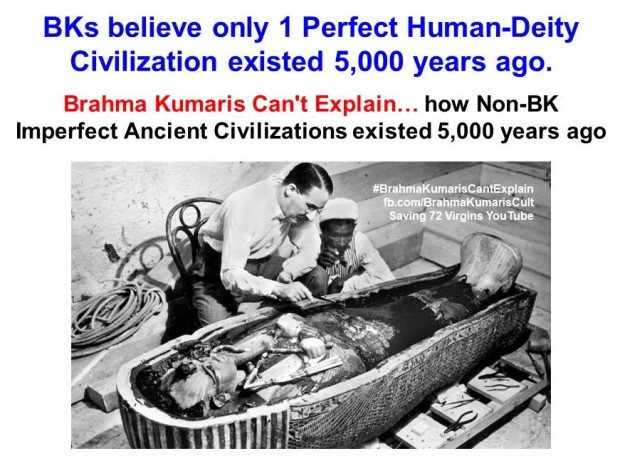 3.  Repeating 5,000-Year Earth Cycle:
● The earlier a soul is incarnated in the 5,000 year cycle the ‘purer’ is the soul according to Shiva Baba i.e. souls reincarnating is Golden Age are higher status than those born in later ages i.e. Silver Age. 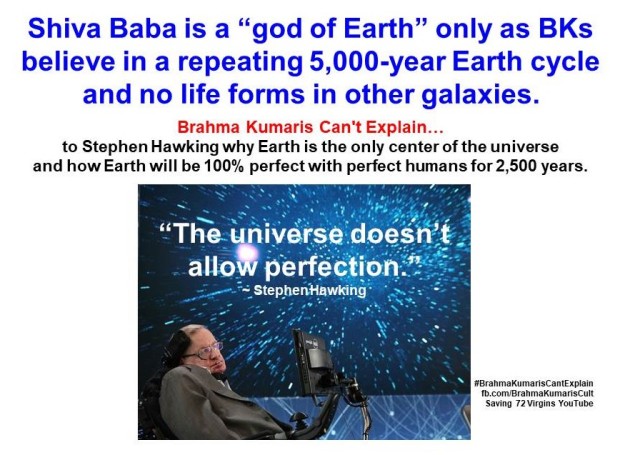 4. All Religions began in Copper Age (around 464 BC) in hierarchy.
The earlier in history the religion was established the ‘purer’ is the religion i.e. Judaism is purer than Islam according to BKs.

But BKs can’t explain how Zoroastrian Religion existed 4,000 years as BKs believe that all religions only started after 464 BC. BKs believe there was only one ‘religion’ in Golden & Silver Age (from 5,000 to 2,500 years ago): The Ancient Deity Religion when human beings were perfect, with no sicknesses or suffering in perfect India. 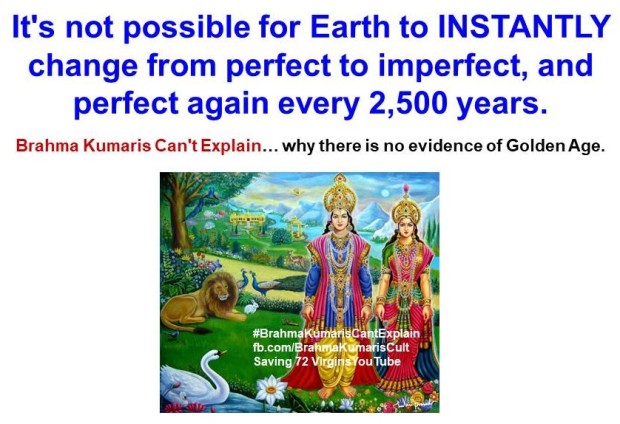 Through Shiva Baba’s daily Murli classes he commands BKs not to have sex, and not to have new children. Shiva Baba makes BK couples change from husband and wife to brother and sister, therefore this Shrimat have caused countless marriage, family and relationship failures.

Shiva Baba’s ultra strict No Sex Maryada is Brahma Kumaris’ biggest cover-up and denial. We hope public figures, celebrities and community leaders do not sponsor or endorse Brahma Kumaris because of BK’s hidden agenda of Doomsday and No Sex cult brainwashing.

Bapdada, the fallen Twin Souls of Shiva Baba and Brahma Baba, enters the body of Dadi Gulzar and gives Avaykt Murli classes and meet their BK followers in Mt. Abu, India – usually in the winter months of December to February. Bapdada have the freakiest whispering voice. Read about:  It’s Karmic Game Over Soon for Brahma Kumaris and Bapdada

A #MeToo Story of Why Robert Chaen Exposed Brahma Kumaris

One thought on “Why Brahma Kumaris is 100% a Cult? 5 False Teachings of Shiva Baba – proven.”