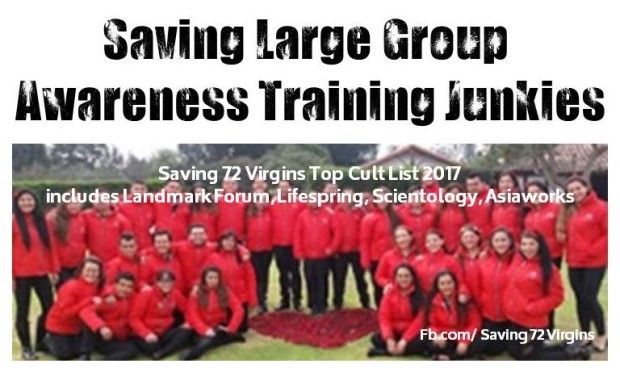 click here
CULT WARNING:  Many LGAT’s MO is to deceptively coerce ENROLLMENTS from every graduate convincing them that they need to learn enrolling skills to make it in life BUT Enrolling becomes the main driving force of LGAT Coaches focus and just about every new Group challenge is to ever increase enrollments.

Another LGAT course format is they push very hard to promote the 3 Levels of Participation (most LGAT follow Alexander Everett (The Father of Human Potential Development Movement) format with small variations:

2) Advanced Level (Wednesday or Thursday to Sunday, 4-5 whole days and evenings 10am to 10pm, probably 12 am): price range around 50%-100% more than Basic around US$1,000+ – this is their sales Killer they desire. They cleverly give a 1-on-1 Interview immediately after the Basic to supposedly evaluate your progress in Basic but actually the ulterior motive of this Interview (which you must sign up during registration) is to hard sell you the Advanced.

3)  90 Day “Leadership Program”: there are many names for this, usually with a lofty, title such as Legacy, Integrity Network (for Life Dynamics,  Leadership Program for Asiaworks) over 3 weekends: at the beginning of the 90 days, in the middle weekend, and last weekend (10am to 10pm, or later):  US$400-500.

Cult Warning: This 90 day program is cleverly positioned as as a legit leadership program but actually the LP is the ultimate massive Enrollment Machine to coerce LP students to openly commit in front of everyone an enrollment number which will be recorded and listed openly for Small Team Leaders (small groups of 10s) to use group pressure for push very hard that Enrollment is a Life Goal/ Skills they must pass. If you enrol anything LESS than 100% the student will label as a failure in this Enrollment area.

NOTE:  The seminar hours are very long, it covers the whole weekend. It is to ensure that they wear down the resistance of LGAT students.
If the above MO doesn’t look like a hard-selling Cult, we don’t know what is.

Some of these brands had asked us to remove them from the SSTV Top Cult list. It is obvious  because their $$$ multi-million income is at $take, that’s the main reason why they are the most protesting of all Cult groups.

We stand by our warning of these big money-making groups as these groups have the most complaints of the cult categories listed. Many Ex-LGAT had very strong opinions about them as newer and newer splinter groups break away, and the cult cycle gets repeated again with hard-core enrollment drives.

Note to Other Anti-Cult Websites who face Protests from LGAT groups:
You are doing a great service to the society by warning potential students of loss of income, etc. Always remember:  LGATs should complain DIRECTLY to the families and colleagues of their cult students who has lost their relationship with them. LGATs have no scruples and no shame.
At Saving 72 Virgins Network, we stand in solidarity with the Cult Victim Families.

We have listed only the popular key players in LGAT. Because of their ultra hard-selling and very pushy approaches.

A Note to LGATs:  Saving 72 Virgins & Afterlife Channel will UNLIST any LGAT group only if they STOP the bad ENROLLMENT practice of openly coercing graduates especially the third level 90 day program. 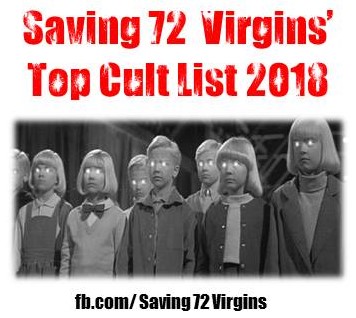