Tony Fernandes, the PR Opportunist: a Costly Lesson in Integrity
By Robert Chaen

“He who holds the ladder is as bad as the thief (proverb)”.

As Malaysians we are very disappointed with Tony Fernandes.
The Rakyat (citizen) doesn’t respect people who support and protect a kleptocrat who allegedly stole US$4.5b. This is an integrity issue.

Tony Fernandes is covering his ass with his recent PR video because he has angered many Malaysians and AirAsia customers. He is just a clever and savvy businessman who sees a PR opportunity to regain customers and stock-price, and regain his broken reputation and public trust.

Fernandes said “the video which I felt was fairly neutral and factual”.
How is it neutral and factual when he publicly supported a kleptocrat, went way overboard by redecorating a plane with full Barisan Nasional GE14 slogan livery and changed the cabin crew’s uniform to blue (the color for BN). He also knew all the media will report on this nationwide. It was political.

This was definitely set up to influence voters for Najib. Who knows how many last minute undecided voters were influenced by Fernandes’ campaigning for Najib.

AirAsia has an extremely strict written clause in its staff contract that disallowed them from campaigning for any political party. As CEO of AirAsia he had breached AirAsia own SOP HR policy where the uniform of the cabin crew should not be used for any party’s political campaign.

Fernandes has every right to vote for whoever he wants – but not openly campaigning for political parties under the AirAsia umbrella, wearing AirAsia logo, cap, or uniform.

Before this, Fernandes was one of the most admired Malaysian CEOs but this big blunder will haunt him for a long time.

He is not as innocent and sincere as he portrays.
He did not walk his talk.

He played badminton and openly supported the Bentong MP, Liow Tiong La (Head of MCA) in 2 May 2018. This was 10 years of consistent ‘misjudgment’ campaigning for political parties by Fernandes – against AirAsia’s HR policy.

Fernandes paid glowing tribute to the leadership of Datuk Seri Najib Razak and named him “Father of Low Cost Air Travel” (28 February 2018). He ‘campaigned’ for Najib WEEKS before the GE14 date was announced and before AAX chairman Rafidah spoke up against Najib and BN, and supported Mahathir and the then opposition. 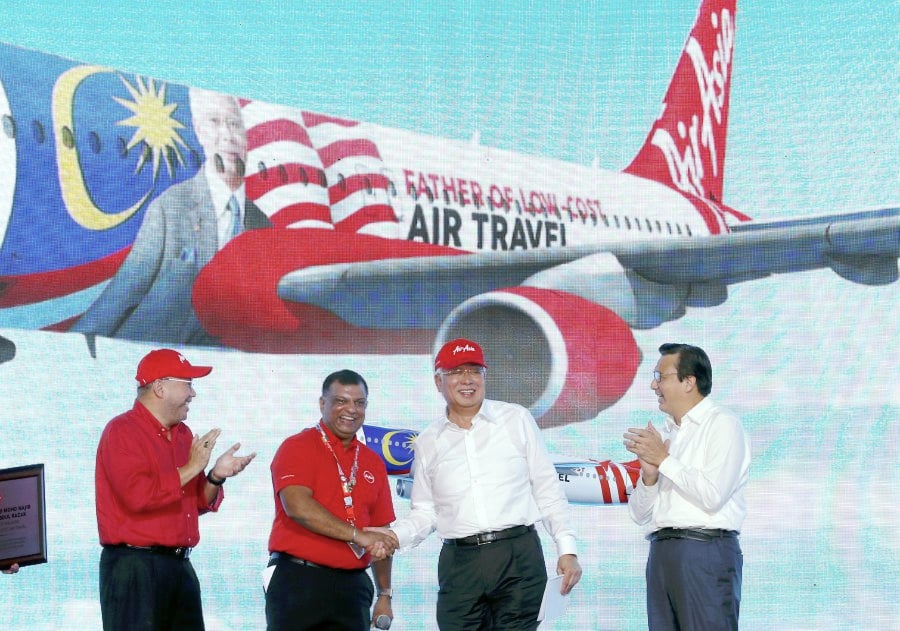 Tony Fernandes and Kamarudin Meranun ‘campaigning’ for Najib (28 Feb. 2018) many weeks before GE14 date was announced and before AAX chairman Rafidah spoke up for the opposition and Mahathir.

‘He had no choice’. I don’t buy that argument.

The following Malaysians and foreigners had been banned, jailed, persecuted, sacked, humiliated, business lost or closed down, and heavily pressured by a tyrannical and kleptocratic government for standing for their principles and against kleptocracy:
Jahabar Sadiq (Editor of defunct The Malaysian Insider; all 56 staff lost their jobs because MCMC banned access to their website), Clare Rewcastle Brown (Editor of Sarawak Report was a key catalyst who spend countless months exposing Najib & Taib Mahmud – without any pay; her website was banned in Malaysia), Xavier Justo (jailed for more than 1 year in Thailand), Zunar, Lim Guan Eng, Anwar Ibrahim, Lim Kit Siang, Muhyiddin Yassin (sacked as DPM), Adam Adli, Fahmi Reza, Maria Chin, Rafizi Ramli, Tony Pua (dozen others with passport banned), Robert Kuok, countless unnamed and unsung heroes who had hardly any social status but principles. Many lost their jobs, and some lost nearly everything.

The unsung heroes all had a CHOICE.
They stood up for their principles but got punished severely as a result of their stand in life.

Tony Fernandes, your principles and integrity should be bigger than your ‘AsiaAsia baby’, job, and money.

If Fernandes was really threatened by Mavcom to cancel additional flights on election day and was threatened to sack the AAX chairman Rafidah, he should have revealed to the media and the public would have risen up to defend Fernandes from being threatened.
[update on 16.05.2018: Mavcom made a police report that they did not threaten with GE14 additional flight cancellation; Fernandes and AA have still not given any proof but instead declared there is no need for Mavcom. Someone is lying, and you know who]

By most analytical surveys, he bet Najib Razak would win big so he supported Najib publicly to curry favors from the government later.

When Tun Dr Mahathir won, he immediately switched tune like his Tune Talk (sorry for the pun), and dumped Najib.

His whole body language, slip of tongue, and tone of voice in the video betrayed his sincerity. His video appeared to be more of a justification and PR soft sell, rather than an apology. Had Najib won, I seriously doubt he would have made this apology.

The reality is Tony Fernandes was a huge sell-out in the biggest moment of modern Malaysian history. He did not buckled. He knew exactly what he was doing. He did not own up but choose to justify his actions. He was covering his ass with his apology video.

He will soon be a cheerleader for Tun Dr Mahathir and PH, because he wants to curry favors and approvals from the new government (now that’s nothing wrong with that – one needs to work with the government of the day. But here we are talking about integrity and supporting a kleptocrat). Hopefully all are forgotten in time. Fernandes is after all a PR opportunist.

In the future PR experts will be evaluating Fernandes’ 2 videos whether it was a PR disaster, or not; and how many people would actually believe his political spin and BS. Eventually Malaysians will forget and probably forgive Fernandes and fly AirAsia. But for now, Fernandes will feel the wrath of the Rakyat. And he will have to live with this black mark for the rest of his life.

He should have own up the truth, come clean, stop the BS, and move on. I hope Fernandes, supporters and collaborators of kleptocrats and tyrants will learn from the costly lesson in integrity.


Robert Chaen is the CEO of ChangeU, a thinker, speaker, strategist, writer and whisperer of truth  Blog, Website,

NOTE: The views expressed are those of the author and do not necessarily reflect those of ChangeU, its subsidiaries, staff, graduates, and affiliates.

SHARE this article ©
You are most welcome to share this article and infographics in your social media or website with only 1 term & condition: acknowledge this http://www.RobertChaen.com source and author Robert Chaen.

Read about  >>>  The Greatest Moments in Malaysian History Happening Everyday Since ‘Second Merdeka’ (10.05)

5 thoughts on “Tony Fernandes, the PR Opportunist: a Costly Lesson in Integrity”