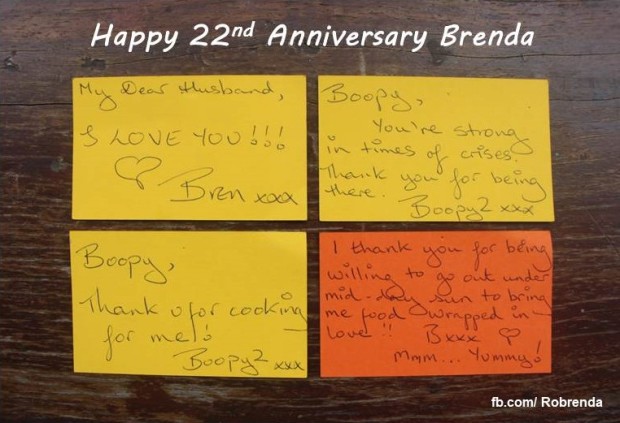 Brenda and I used to write Love Notes to each other.
I just found some of Brenda’s Love Notes to me somewhere in her folders.
Her nickname for me is Boopy, hee hee.

I made our self-designed marriage vows with Brenda that in sickness and in health I would take good care of her, and vice versa.

She had Crohn’s disease for 20 years, and died from it (perforated intestines) in 2013. Crohn’s disease is a very rare inflammatory bowel disease (IBD). It causes inflammation of the digestive tract, which can lead to abdominal pain, severe diarrhea, fatigue, weight loss and malnutrition.

When I first met her in 1994 in a spiritual workshop in Hong Kong, she already had Crohn’s disease but it was not diagnosed for more than 1 year. She was one of the first Hong Kongers to be diagnosed with Crohn’s disease.

When she had a bad episode she would vomit more than 10 times per day, and diarrhea too. Her inflamed intestines could only absorb a fraction of nutrients which resulted her being very skinny (some people mistook it for anorexia). Her lowest weight was 32 kilograms (72 lbs) – seeing her so thin was too unbearable.

Because of Crohn’s she always had a slight fever – the faulty gene trick the body that it is under attack, and fever is the body’s natural defense against infection. Andrew, my doctor brother describes Crohn’s as a ‘mini-SARS’, an over-immunity. It’s like the over-immunity is ‘shooting’ inside its own internal body through fever, and rejecting even water or food as an enemy resulting in diarrhea and vomiting – on both ends of the digestive system. If SARS is like an assault rifle then Crohn’s is like a handgun shooting single shots inside the body.

The good thing was she didn’t get flu.

But Brenda didn’t let Crohn’s disease define her. Most friends, clients, and graduates were not aware of her sickness and regular pain. She didn’t whine or complain. Her Adversity Quotient was very high (dealing with crises and daily adversities).

I would cook for us, and mainly I would go out and bring cooked food home. In Malaysia I would cycle in the hot mid-day sun to bring her favorite food. Sometimes she would not eat what she ordered as it was not going down well.

I couldn’t understand why she couldn’t force herself to eat in our early years… until one day when I had a bad diarrhea, fatigued, I didn’t want to eat anything, and was turned off by the very sight of any food. She said that’s how she felt when she was not well.

I would massage her to relieve her pain. Or make a hot water bag for her tummy.
For the longest time I felt so helpless that I couldn’t do enough to relieve her suffering from Crohn’s disease. But she told me that all my little gestures, massages, and kind, encouraging words helped her a great deal.

She helped countless friends, family, relatives, people and graduates in her life.
But only a tiny handful really knew she needed help too.
Because she appeared so strong and invincible, when she was in her own really down periods, no one came and helped her. They were ‘too busy’ to notice, caught up in their own worlds. Friends were in denial that sometimes she too needed help.
She felt so abandoned in those times of great need.
I know what she felt.

Taking care of Brenda was one of my biggest life lessons.
It gave me meaning and purpose.
Brenda inspired me to have unconditional love, truth, and light.
She continues to inspire me from The Afterlife.

I was actually more of a house-husband and I was happy playing the role. We were Co-Coaches in ChangeU for 12 years (2000 to 2012) and she was my business partner.

Happy Anniversary Brenda
I love you so much.
Thank you for taking good care of me, my Guardian Angel, my Twin Soul.