Brenda, I thought it was our twin souls’ predestiny
to join each other in every lifetime.

Now I realized that it was our individual’s
free will whether to join each time.

Sometimes we chose to have a break.
that didn’t mean we were weak,
or that we dared not speak.

Are we the lord of the ring?

Can we choose to hold on or let go
the red thread of karmic fate?

Yes, I have chosen you, my Twin Soul Brenda.

I will find you as a child after you are
reborn after your fifth memorial.

We’ll find each other & our Angels.

Hello & goodbye are forever in
the afterlife & the beforelife.

Truth, love, and light
are beyond free will.

Destiny & free will are
the Ying &Yang of life.

I found and chose this Butterfly-Sunflower-Child Fairy because the child’s face looks so similar to Brenda when she was a toddler in Hong Kong. Compare the faces: 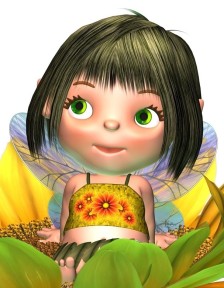