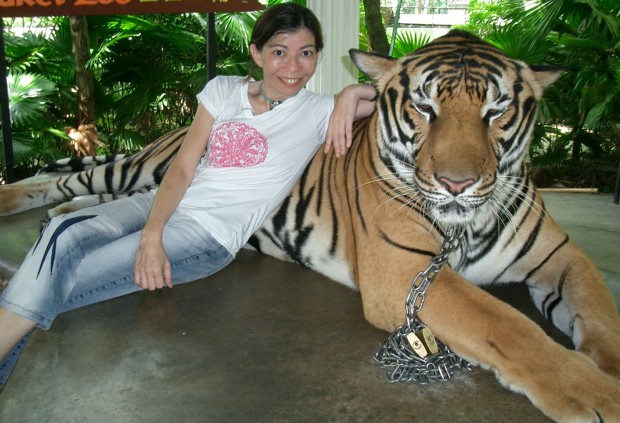 What was Brenda José like and how is she different now?

This is article should be highly entertaining, a treat for Brenda’s friends and graduates as I have revealed some never before shared information about her, me, and our marriage & 1995-2013 relationship.

Brenda crossed-over on 23 December 2013 at 5:23pm.
Most people who knew Brenda when she was alive would likely describe her along these lines. This is my own take describing Brenda:

Brenda’s Character & Personality:
●  Very intense, empowering, confrontational, badass, cool, calm, usually always right, hardly apologizes (as she hardly make mistakes or cross the line).
●  Drama Queen
●  She was born in the Year of The Tiger = magnanimous, no bull-shit girl, she’ll bite after giving a roaring or barking, Queen of the thick jungle (compared to the Lioness who is the Queen of a sparse Safari)
●  Her Sun Sign is Aries = headstrong, confident,
●  Brenda’s Soul Numbers are 7 & 11 (these numbers are occurs whenever her angelic presence is near.
– born on 7 April 1962. 7+4+1+9+6+2=29 / 2+9=11 (Master Numbers 11, 22, 33…99; You don’t need to reduce MN to a single digit number)
Number 7 = symbolizes teacher, specialist (vs. number 9 the generalist), spirituality, 7 days, 7 wonders;
7 is ruled by Neptune = symbolizes love for the sea/ beach/ island girl,
Number 11 (or 2) = symbolizes the diplomat, negotiator, arbitrator, duality, feminine “Yin” energy,
2 is ruled the Moon = symbolizes emotions,

Brenda’s Key Characteristics:
●  She suffered from a rare disease called Crohn’s Disease.
Crohn’s affect and inflame any part of the intestines, it prevents absorption of nutrients so Crohn’s patients usually look anorexic, and thin. Brenda lowest weight was 72 pounds or 32 kilos in one of her worse episodes. Her heaviest before Crohn’s was 130 pounds or 59 kilos (she was slight overweight and was a stocky Hockey Goalie once). She would vomit over 10 times a day for 3-4 days and diarrhea daily.
●  She survived her first intestines perforation in 1995.
Immediately after a James Newton‘s 4 day personal growth called “Eau de vie” (water of life), she was admitted to Queen Mary’s Hospital. Brenda shares her story of how she overheard 2 surgeons were having a heated argument in Cantonese – the local surgeon refused to operate as it was passed midnight, the other visiting UK Surgeon then took over to operate on her.
The surgery was 7 hours long, the explorative surgery cut and stitches were 7 inches long, and 7 inches of her perforated intestines were removed and re-connected, her bed was 7 and her ward was 7.
When she woke up, the UK Surgeon told Brenda he suspected she has Crohn’s Disease.
Brenda was one of the first patients to be diagnosed with Crohn’s Disease in Hong Kong.
Robert was the one who took good care of her in sickness and in health in the 17 years of marriage and 3 separations in 2007, 2010, and 2013.
●  She did not survive her second intestines perforation in December 2013. Read Brenda’s Obituary-Tribute.
She died from internal toxic contamination, all major organs failed except her greatly weakened heart which was kept alive by 4 medicine-pumping machines; her kidney failed and was on a dialysis machine, her lungs failed she was on a lung perforator.
●  She loves to “save unpopular lost souls” whom nobody cares about.
●  She was Ms. Popular and knew how to treat friends so well.
●  She gave free Soul Readings and most friends comment she was amazing accurate that was scary.
●  She was a top performer sales consultant in most jobs she was in.
●  She was COO of ChangeU, and my Business co-Partner.
●  She was my Co-Coach for 12 years.
The last corporate workshop was Resorts World Genting Senior Management Conference in Resorts World Manila.

Brenda’s Hobbies, Likes & Hates
●  She spends hours on games with her precious Ipad.
●  She bonds with other smokers (she was smoker from when she went to a Penzance, UK school at 18). She smoked Salem Lights (one packet a day).
●  She used to run Friday whole night Texas Hold’em Poker sessions at our house and Hong Kong-style Mahjong.
●  She liked SunFlowers, Godiva Chocs, shoes, shopping, funky watches, sunshades.
●  She was a very classy dresser with impeccable taste, her accessories and jewellery collection is huge.
●  Her dream watch was a Cartier panthere which I gave her.
●  She became an excellent cook when she separated from me. Especially she inherited her Mum’s and Dad’s Portuguese Secret Recipes.
●  She hated washing dishes (she is excellent in laundry, and sorting).
●  She was an excellent travel packer, very organized with a checklist, she was the best travel organizer she had high awareness and mindfulness of every traveller’s peculiar needs are met.

Brenda at Work
●  For her students she was known to play “Bad Cop” while I play Good Cop – she would bite and not let them get away with their weaknesses. Now I play both Bad Cop & God Cop.
●  She had no patience with stupid staff.

Brenda as my Wife & The Near Death Lightning God Sign:
●  She knew how to fend of horny, rich, handsome men.
●  She rejected USD1m offer from a Saudi Arabian Sheikh.
●  She told off a friend’s friend who hit on her on our wedding day who wanted to sleep with her if things didn’t work out between us!    read full story
●  Loving, gave me lots of freedom.
●  Kept me in check especially my mild Bipolar Disorder II.
●  Our fights were super intensive, normally last around 6-8 hours every month.
Most couples would have easily split after such intensive fights but we didn’t.
I was diagnosed with mild Bipolar Disorder II by Professor Jambunathan of University Hospital. In hindsight Brenda later realized after we both knew I have Bipolar that she should not have confronted head on during our fights.
I could have given our marriage another try but I was way too tired as she was inevitably my #1 biggest Bipolar Trigger that triggered me to Mania and rage. I hated myself and felt extreme guilt time I had a manic fight with Brenda (NO, I did not enjoy those fights as some people commented including Brenda herself).
●  She nearly got stuck by lightning which 10 feet from her in Cheung Chau in 1995 our first couple place before marriage.
The Near Death Lightning God Sign was God directly telling her never ever to leave me.   read full story
●  But She did leave me in our 17 years marriage.
I told her that I was not good for her because of my Bipolar Disorder.
I separated from her 3 times 2007 (I myself had a nasty bicycle accident during the separation which knocked out my 2 front teeth), 2010, and 2013.
In early 2013 I forced her to leave me for good. She reluctantly returned to Hong Kong and to take care of her aging parents.
That was the first time ever in our marriage that we were so far apart. It was also the start of her health deteriorating.
On hindsight I should never had told her to leave me – Brenda & I did not realize the Lightning God Sign was such a serious sign for us never to leave each other and for us to fulfill our Twin Souls Mission later.    read full story

How is Brenda different now (as Love Angel):
●  I really like Brenda now as the Love Angel.
She is not so pushy, bossy only to me yes haha.
●  LAB is always with me unless I want to be “alone” – in that way I don’t miss her. I only miss her when I am reminded by her belongings or when I visit many Hong Kong places where we used to frequent. That’s why only now I’m ok to return to Hong Kong more as Hong Kong is a constant reminder and memory trigger overload!
●  Just because I talk a lot about Her and Her Whisperings doesn’t mean I had not let go of her – contrary to what some people think. I had let go of her at the Death Bed.
●  LAB is very cool, calm, elegant, has huge energy fields.
●  LAB’s roles are Messenger (She was/ is Hawk Medicine), comforting grieving families, revealing the secrets of The Afterlife, watching the Flow of Karma, helping in Divine Intervention of Karma, giving Premonition Disaster Warnings of imminent disasters especially Triple Disasters Premonitions, banishing and cornering Fallen Twin Souls, Deceiving Spirits, fake gods for ArchAngels’ good conquering evil, and protecting-alerting-guiding-saving.
●  I call Brenda “The Drama Queen of Endless Afterlife Signs” (Brenda’s last 3 words were “I, Drama Queen.”
●  Investigative TV Journalist and Hollywood Producer of Looper and Resident Evil, Craig Santy finds Evidence that Angel Brenda can control super-computers, animals, insects, cause power outage, and save lives in MH370.   read more
She will help you identify Your Top 3 Big Karmic Debts from The 27 Big Karmic Debts   read more
●  She help you with the Grieving Process.   read more about the 17 Phases of Grieving
●  She will help you admit and own Your Dark Secrets which is holding you ransom.
●  She will send you Direct Messages.
●  She gives you Love Lessons on Sex-Money-Power in Relationships, Cheating, Seduction, Fights, Age Difference, Sugar-Daddies & Mistresses.     read more
She can help you How to Escape a Cult and Win a Debate with a Cultist.   read more
●  She will help you detect and escape the Daji Fox Seducers‘ temptations and effects.   read more
●  How you know Love Angel Brenda is near you – many 7 & 11 Signs direct along your path in various forms: 7 & 11 Car License Plates, 7 & 11 in watch/clock e.g. 11:11 am, etc.