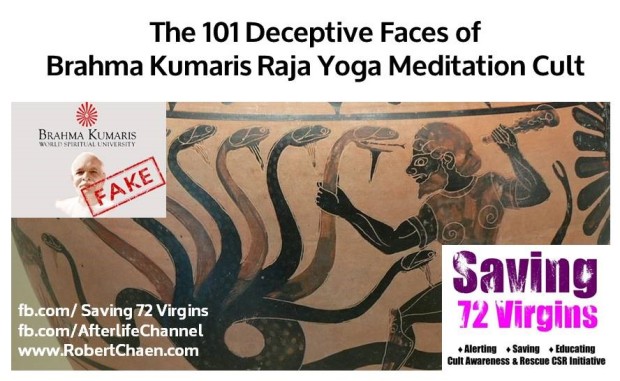 Whisperer Robert Chaen and his brother Tom were the World’s first 2 Chinese Teachers who were well known internationally in BKWSU. They established the BK Raja Yoga Meditation Centres in Malaysia in 1981. Robert joined BKs in 1979 in Melbourne and left BKWSU in 1989 in Hong Kong.He is a now a totally Rehabilitated Ex-Brahma Kumaris Cult Leader.

The teachers and students like to be called BKs which stands for Brahma Kumaris (hindi for Virgins of Brahma Baba the Founder of BKWSU. They refer to each other as Brother or Sister as BKs have an extremely strict discipline of Brahmacharya or Celibacy with all couples.

Principles practiced by BKs called “Maryadas” (Discipline) which is direct accordance to Shiva Bab’s “Shrimat” (supreme directions):
●  Brahmacharya or Celibacy for all serious student couples.  BKs consider Lust as the most destructive vice of the 7 Vices and lust is the main reason why human beings

Cornerstone Beliefs of BK:
●  Exactly Repeating 5,000 year cycle
●  Shiva Baba (BK’s supreme soul) incarnates in Brahma Baba’s body every 5,000 years at start of Confluence Age. (note: Do not confuse Shiva Baba to be Shiva who is a Hindu god)

●  The end of the world was predicted by Shiva Baba to have happened on 1986 (result EOTW did not happen) through 3 ways: natural disasters, civil wars, and nuclear war between Russia and USA.
At the end of Confluence Age, Shiva Baba goes back to Soul World and wait 5,900 years to incarnate again. Brahma Baba incarnates as baby Krishna or Adi Dev (Adam, the first man on Earth). When Krishna becomes an adult he becomes Narayan & Laksmi (the first King & Queen of Golden Age)
●  Humans started in the Golden Age as 100% “pure” Deities with no vices
●  108 Rosary
●  Brahma Baba died on 18 January 1969 and became Avayakt (subtle form in the Subtle World).
●  Shiva Baba & Brahma Baba combine into Twin Souls called Bapdada (Bap meaning supreme father and Dada meaning brother).
●  Bapdada then come down from the Subtle World into their Second Chariot, the body of Dadi Gulzar (aka Dadi Hirdaya Mohini)

BKsuper-rich, super-powerful, huge movement who claimed to have more than 825,000 regular students, with over 8,500 centres in 100 countries (figures circa 2008)

NOTE: The Modus Operandi of the deceptive faces of BKs are almost the same for all Cults.

Benefits Brainwashed and Promoted by BKs:
●  Donation to the “Yagya” (BKWSU Institution) will be directly rewarded in Golden Age – the higher the donation the higher status you have in Golden Age.

How does a BK get kicked out?
●  The higher you are, the bigger the fall, the scandals, and ostracizing and being kicked out.
●  Breaking Maryadas especially falling in love with another BK – is a huge sin, frown upon unlike the Moonies who encourage staged and Cult-arranged Mass Marriages.
●  Westerners and non-Indian Sisters must work full-time to bring income while doing service in the evenings and weekends. If you don’t bring income, you are then considered taking sustenance from the Yagya and therefore the Zone-in-Charge may kick you out if there are jealous BKs complaining.

What is the Bottom-line Prognosis of Brahma Kumaris?
● dangerous cult
● break up families, relationships
● no lifestyle, no sex, no entertainment
● give your money, assets, property to BKs
● whole life wasted
● you gained nothing and you have nothing if you ever leave BK

What YOU can do about the BKs:
●  Share Cult Alert of BKs to your friends in social media.
●  Cut all funding and donation.
●  Help by making your comments in our YouTube channels and Facebook Pages as BKs tend to retaliate in social media – they are 800,000+  regular students strong.

NOTICE:
Since Robert’s Brahma Kumaris YouTube videos and articles have gone viral, Robert has been swarmed by many Ex-BKs and family members of BKs desperately wanting help. He has written a useful, self-help BK Cult 101 Guide on WHAT you can do if you have a BK family member, spouse, or friend.
Due to time constraints and running many ventures, Robert can no longer personally attend to enquiries. We suggest you subscribing and contacting the following self-help resources:

You can read all Robert’s Brahma Kumaris articles in RobertChaen.com, click  >> https://robertchaen.com/category/cults/brahma-kumaris-cult/

Since Robert’s Brahma Kumaris YouTube videos and articles have gone viral, Robert has been swarmed by many Ex-BKs and family members of BKs desperately wanting help. He has written a useful, self-help BK Cult 101 Guide on WHAT you can do if you have a BK family member, spouse, or friend.

There is Light, Truth, Love & Life through the Darkness of Cults. “Freedom  Butterflies”:  A self-help e-book for those who live with Cult family members to return to innocence and their families ~ by Robren