My Late Wife & Twin Soul Brenda Jose will be born as Girl after 2018.
“You have only less than 2 years left!” Whispered Angel Brenda through Joanne, an amateur Psychic Channeler.NOTE: This is one of my earlier articles so it is a bit “raw” and not edited to make it easier for layman readers to understand.

Joanne K. is a professional Celebrity MC, ex-TV Host, and a gifted amateur Psychic Channeler. In fact Joanne is the only verified Channeler so far that Angel Brenda has ever used three times to converse directly with me.  Meeting Brenda’s Incarnation as early as the end of December 2020. “You have only less than 2 years left!” whispered Brenda through a Psychic. [Twin Souls Part 95]

Brenda had 3 Afterlife Messages for Robert a day after Valentine’s Day: Brenda moving on, be a true Papillon (butterfly), and Number 4.

On 15 February 2017 at 10:45 pm, my celebrity friend and natural psychic (she does not channel departed souls as a hobby or a career), Joanne pull me aside during a public event I was hosting. She said she was channeling Brenda, my crossed-over wife and supposedly Brenda apparently had 3 Afterlife Messages for me:

1) Brenda has only 5 year with me, before she “leaves”.
2) She challenged me to be a true Papillon (butterfly in French, and a famous personal effectiveness workshop I used to co-coach with Brenda) – to truly fly freely.
3) A prominent Number 4 was seen in the psychic vision.
Is this a fake message from an imposter channelled spirit?

Let’s go in a little more detail about this. First of all, I’m very skeptical about anyone who claims to able channel Brenda. As the particular psychic was crying and was very emotional, and I know as truth that a crossed-over spirit or a guardian angel like Brenda does not have any human feelings as one need a human body to sense human feelings and activities. Read how there is no human activity in “Heaven”.

But I gave Joanne the benefit of doubt, as human channels of guardian angels and ghosts (they are different) often times filter through their own human perceptions and limited understanding. Therefore, the psychic who is well known to be a drama queen and highly emotional, she could be interpreting to her best human perception, and will come across as a drama queen.

Secondly, the “channelled” Brenda was visibly upset as the psychic held both my hands very tightly and whispered that I did not do anything for her during Valentine’s Day, a day before.

I replied to that spirit that it’s not true that I did re-post a Valentine’s Poem which I had written 1 year ago. On that occasion Brenda had responded by having one of my blog post in RobertChaen.com received 46,747 views in 2 days compared to around 300 views per day. I was thinking and talking to her a lot during Valentine’s Day 2017.

The channeled spirit wanted me to give a afterlife offering of her favorite dessert. Brenda didn’t have any particular favorite dessert but I knew she like sesame paste Chinese soup dessert and tong yuen (glutinous balls in ginger soup).

I did offer Brenda the above Chinese desserts the next day out of “duty” even though I never had such an afterlife request before.  On 20 February 4 days later one of my interns and I saw a very low-flying light brown hawk fly around 50 feet away. This I can confirm is more of Brenda’s usual Afterlife Sign Patterns as she known as Hawk Medicine in Native American beliefs (medicine meaning the spirit of Hawk medicine is “Messenger”).

Cassie’s Soul came back into her body for one last time to say goodbye!
On 20 February a separate scenario happened very suddenly. One of my staff Natalie’s first cousin Cassie Tee went in coma after 2 days checking into Subang Medical. At around the time when the hawk flew pass me, Cassie crossed-over from an infected and collapsed lung probably from pneumonia. When the EEG heart machine went flat-liner alarm, the visitors including Cassie’s boy friend yelled out to her. The heart-monitoring machine declared her heart was dead but miraculously her heart beat came back for a very short while – this means Cassie’s Soul came back tino her body for one last time to say goodbye!

Ringing of a Doorbell by Brenda heard by 8 people but no one was there!
To be fair Joanne was spot on when she channelled Brenda on 20 December 2014 as she gave an afterlife sign of “pink”. Apparently Brenda rang the door bell which 8 people including myself hear it, and the psychic told me 7 hours later that it was Brenda who rang the door bell once and was standing by the gate. I thought to myself it must have been very important for her to ring a door bell.

I mean she had started 2 cars before one after another with music playing, air con on, and the lights on in day time, but ringing the door bell was a “first time” from Brenda, and there are many first times afterlife signs from Brenda.

A day later I received an FB message that my Godson Todd Man had crossed over around 1:20 pm on 20 December. I searched for a good photo for my tribute writing for my Godson. I found one very beautiful photo of both them in the best of health and hugging each other closely. Brenda was wearing a PINK t-shirt. 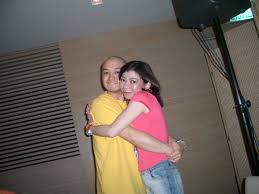 Point umber 2: Okay, It is true I can do more to be free as fly as a Papillon (butterfly) as I coach attendees of my Papillon Personal Effectiveness workshop.

Point number 3: What is this Number 4 Afterlife sign?
I told the psychic that it could I was born on 4 September, or it could be anything related to 4, may be my brother Andrew born on 4 May. Right now there are no further dots to connect, so let’s wait for more dots if any to appear.

Oh, by the way, one of the 4 bats appeared on 22 February on the birthday of CE Teoh after a few weeks of Chinese New Year “break”.  Teoh’s wife and Brenda died on the Same Date Deaths of 23 December – 3 years apart.

My 7th Sense & Soul Whispering says Brenda’s 3 Messages through Joanne my Psychic friend on 15 February 2017 is confirmed accurate:
●  I sense Brenda will incarnate 5 years after her crossing-over – sometime after 23 December 2018.

●  I sense I will meet my Twin Soul Brenda again in my current lifetime probably in a body of a 2-18 year old little girl (I asked Brenda if this a new Soul Agreement between us and she confirmed yes).  This means I will be able to meet incarnated Brenda as early as December 2020 to as late as 2036.

Case in point:  Following the Buddhist belief in the principle of reincarnation, the current Dalai Lama is believed to be able to choose the body into which he is reincarnated. That person, when found, will then become the next Dalai Lama. It took four years to find the 14th (current) Dalai Lama, Tenzin Gyatso.

I suspect that Brenda may be born to someone real close to me such as my GodDaughters Suyi Tam (she gave birth to Emma on 19th October 2018 – 2 months earlier than predicted), Stella Ong, Flora Xuan, my GodSon Javin Tan, or some close relative like my cousin Kelvin Yeap.

This part I’m not so sure how it may pan out but I’ll find Brenda.

Watch video about Sanya Kybopha’s Soul Agreement with her newly departed mum that the mum will be born as Sanya’s child: https://goo.gl/f9KRkE

●  I will not need to search for her – we will meet each other naturally.
Just like how they ‘recognize’ the new incarnation of The Dalai Lama in Tibet, I will be given irrefutable proof that the kid is Brenda. Don’t forget that Brenda gave me the Mark Six Afterlife Sign 7 &11 as irrefutable proof.

●  I probably will test the kid with Brenda’s belongings like how the Dalai Lama is tested with his previous incarnation belongingness (the current Dalai Lama is now the 14th incarnation of Tulku, an enlightened being who can choose the time and place of future births).

●  I need to recall and connect the Brenda’s afterlife dots as I’m very sure Brenda had left irrefutable clues within the 49 days after she crossed over for me to ‘recognize’ where and who Brenda may incarnate (in any case only I will know the secret of recognizing Brenda, my Twin Soul).

So good news when I do meet and verified the incarnated Brenda, I’ll announce to all readers and Brenda’s close friends. Then you can tell me if you ‘recognize’ Brenda especially those who knew her.

Different human body & incarnation will have very different perception, reality, and Karmic Lessons
Although I must say by virtual of being in a different human body itself will change the Brenda’s Soul perception of the world, cultural values, upbringing, but Brenda’s Soul will still shine through as Brenda will unconsciously ‘recognize’ past soul connections, some past objects will came back to her, or she will ‘recognize’ some of her past life belongings just like how I attracted my 2,300 year old Chinese Sword (read more click here).