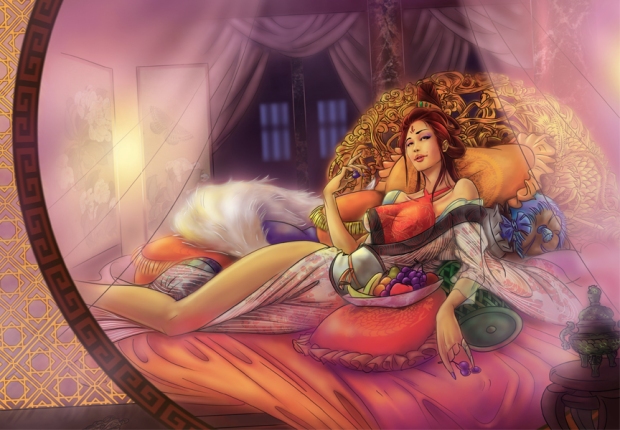 Lore: Su Daji was the human incarnation of a nine-tailed fox spirit, who Nüwa herself had summoned to destroy the king of Shang for his depravity (including lusting after Nüwa) but not to bring harm to the people. Nevertheless, the spirit had killed and possessed the real Su Daji to achieve her goals. Entranced and corrupted by Su Daji, the king increasingly neglected the affairs of his state and indulged in depraved pleasures to the detriment of the populace. Su Daji had digressed from the divine order, while satisfying her own personal hunger for torture. Many people—including upright ministers, aristocrats, the common folk, and even the queen herself—were brutally tortured and executed through the machinations of Su Daji, as was many directly murdered by her. In the end, it was deception of beauty that led to the inevitable downfall of a once-great kingdom.

Su Daji appears as a young lady of noble heritage as the supposed daughter of a marquis. She’s said to be captivatingly beautiful, but she may display telltale physical traits like the nine tails as she’s a demon shapeshifter like other fox spirits. The oldest references, such as the Shanhaijing, call these beings nine-tailed foxes (九尾狐), so that would be her ingame title. Her nine tails are white, which is generally the case for nine-tailed foxes in lore.

She wears a hanfu (漢服) dress, including a flowery-designed sash around the waist and a large-sleeved upper-garment, baring her shoulders. She has long loose black or white hair (default and recolor), decorated by a flowery buyao (步摇, 3rd image below), which is a type of hairpin with dangling pendants. She’s also sometimes depicted with a huadian (花鈿, 4th-6th images below), a sort of flowery decorative cosmetic that ladies used to wear on their forehead.

The tails and her abilities have a slight smoke-like and luminious spectral aura of fox energy (6th image below). In her lore, it was said that this spirit aura could hide the Moon itself when the spirits hovered through the air. Her weapon would be her sharp fingernails styled as jewelry of precious metals when using certain abilities and two swords for basic attacks, which progression could be styled like an elegant sword dance with swift twirling/flowing movements. She carried two swords when attacking a military camp in lore. Her behavior would range from sweet and innocent–which is basically deceptive–to seductive and alluring to malevolent and sadistic.

Her recolor or tier 2 skin could be named Celestial Fox. It was said that some fox spirits could be admitted to the heavens if they had cultivated virtue over the many centuries. These spirits were known as celestial foxes, which contrasted with those spirits that became demonic. The Youyang Zazu described celestial foxes to be golden of color, so Su Daji’s tails would have a fiery golden hue.