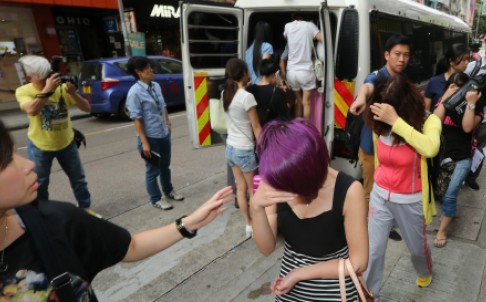 Grenville Cross says while the buying and selling of sex is legal here, the law comes down hard on organised prostitution and trafficking – in line with a recent global drive to decriminalise the trade
Police and immigration officers arresting suspected prostitutes from the mainland in raids on hotels. Photo: Felix Wong

When Amnesty International, at its international council meeting in Dublin last month, announced its support of the decriminalisation of all aspects of consensual sex work, there was an angry response. Over 10,000 people, led by Hollywood movie stars, have petitioned Amnesty, urging a rethink.

The group’s stance, however, is supported by others, including the World Health Organisation, UNAids, the International Labour Organisation, Human Rights Watch and the Global Alliance Against Trafficking in Women.

Amnesty says that, although the buying and selling of sex between consenting adults should not be an offence, its policy is not to protect pimps.

Instead of prosecuting sex workers and their clients, the focus should be on tackling exploitation and abuse. A trafficked woman, after all, is not a sex worker exercising free choice, but a crime victim. Amnesty’s policy adviser, Catherine Murphy, says trafficking in women is “an abhorrent abuse of human rights, and must be criminalised as a matter of international law”.

The police have certainly focused more on the evils of the sex trade, such as the ensnarement of underaged girls, rather than on hounding individual sex workers, which is a sensible deployment of resources
In Germany and the Netherlands, which have liberal prostitution laws, brothels are licensed, with sex workers having access to state benefits and health checks. High levels of security, not available to freelancers working alone, are also in place. Amnesty discovered that sex workers felt that criminalisation made them less safe.

Laws against brothels often led to sex workers being prosecuted, while in Norway they were routinely evicted from their homes under local “pimping” laws. In some places, two sex workers working together for their own safety faced prosecution for running a brothel, which was unfair and counterproductive.

In Hong Kong, as in England and Wales, the buying and selling of sex is not illegal, but brothel keeping, organising prostitution, living off the earnings of prostitution and soliciting in a public place all are.

In the 1980s, the police successfully clamped down on vice establishments, particularly the notorious “fish ball stalls”, or yu dan dong, which employed very young women in squalid conditions, as well as on the more upmarket nightclubs providing illicit sexual services.

Nowadays, in a changed climate, there are fewer prosecutions, and law enforcers have other priorities.

Many of the more traditional vice premises have, moreover, long since disappeared, and the massage establishments legislation, enacted in the 1980s as a means of combating vice in licensed premises, has generally worked well.

A more relaxed approach is, it seems, also taken towards street walking, if discreet, in places like Mong Kok’s Portland Street, even at peak times, though this is probably related to an absence of public complaints. 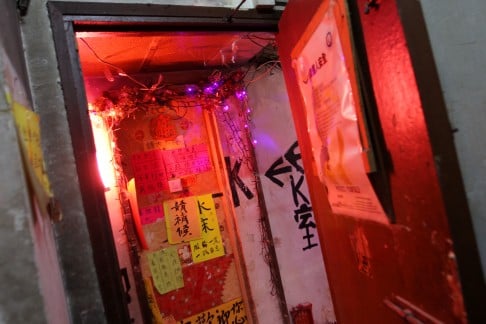 Inside one of the Kwun Tong flats used as a brothel. Photo: David Wong

The police have certainly focused more on human trafficking and the evils of the sex trade, such as the ensnarement of underaged girls, rather than on hounding individual sex workers, which is a sensible deployment of resources.

Although sex workers from elsewhere, working in breach of their entry conditions, must expect strict enforcement action, there will often be cases when they can be given an immunity from prosecution in return for testifying against their pimps and traffickers, who, after all, are the real villains.

Where possible, therefore, the authorities should adopt a light touch towards sex workers who stay within the law and do not disturb others. They should also be as tolerant as possible of those who seek to ensure their own personal safety, perhaps by taking precautions which, legally, may be close to the line, such as banding together, provided, of course, this avoids hazards or nuisance.

By and large, Hong Kong’s approach to sex work is aligned with Amnesty International’s policy, and is focused and realistic. However, anything that can be done to avoid unnecessarily harassing, humiliating or charging sex workers is to be encouraged, not least because humanity has its role to play in law enforcement.

Grenville Cross SC, an honorary professor of law at the University of Hong Kong, is a criminal justice analyst