‘I am full of hope’: Pope Francis visits Ground Zero and also weighs in on Iran deal and gay marriage

Pope Francis speaks during the homily as he celebrates Mass at Madison Square Garden. Photo: EPA

Pope Francis crowned a packed tour of New York on Friday by celebrating mass at Madison Square Garden, after greeting crowds in Central Park and praying for world peace at the 9/11 Memorial.

Around 20,000 people packed into MSG, the home of the Knicks basketball team, to take communion in the presence of the 78-year-old pontiff.

The city’s premier concert venue, originally booked Friday by Billy Joel, was lit up by the singer’s own crew who turned it into a serene and beautiful venue for Catholics to celebrate mass.

Once again, the hugely popular pope focused on society’s most vulnerable during his last public remarks in America’s financial capital, a city of extreme wealth and poverty.

He praised big cities for their diversity but called on worshippers not to forget “the faces of all those people who don’t appear to belong, or are second-class citizens.”

“They are the foreigners, the children who go without schooling, those deprived of medical insurance, the homeless, the forgotten elderly,” he said.
The pope at the 9/11 museum. Photo: AP

It marked his last public engagement in New York before he leaves for Philadelphia, where he will greet huge crowds at the Festival of Families, which takes place every three years.

Earlier on Friday, he led a gathering of 700 at Ground Zero, where he paid tribute to the nearly 3,000 victims and those who were first in line responding to the September 11 attacks.

“In this place of pain and remembrance I am full of hope,” said the Argentine pope.

“I hope our presence here sends a powerful sign of our wish to share and reaffirm the wish to be forces of reconciliation, forces of peace, of justice.”

After an impassioned early morning speech at the United Nations, and the grave solemnity of Ground Zero, Francis was welcomed in song and laughter on a heartwarming visit to a Catholic school in New York’s East Harlem neighbourhood Friday afternoon.

Beaming and relaxed, even submitting to a selfie or two, the pope – who is already a week into an exhaustingly packed American tour – seemed to come alive during the hour he spent with the children at Our Lady Queen of Angels school.

Flag-waving youths chanted “Holy Father, we love you!” as the pope smiled and grasped hands, before heading inside the school to a welcome from a choir of largely black and Latino students.

Tenderly patting heads, Francis toured the classroom chatting in Spanish, before meeting migrant workers and their families who presented him with gifts, including a set of tools on behalf of the Big Apple’s army of day laborers.

As in his historic speech to the US Congress the day before, Francis cited the legacy of Martin Luther King.

“One day he said: ‘I have a dream’,” said Francis. “His dream was that many children like you could have access to education.”

“Don’t forget about that. Today we want to keep dreaming,” said the pope, whose reform-minded approach and humility has earned him a rapturous welcome in America. 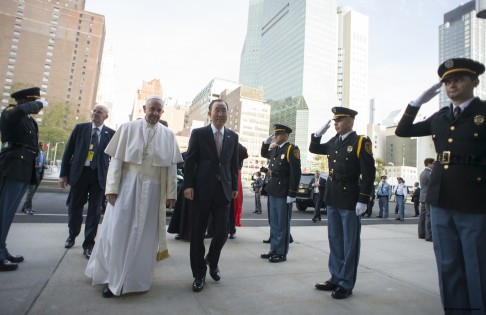 The pope arrives at the UN headquarters. Photo: AP

From Harlem, Francis set off for Central Park, where he was greeted by hysterical screams of joy from a sea of 80,000 people who waited to catch a glimpse of him.

Many were Latino immigrants who said they felt a special connection to the pope, coming together in a carnival-like atmosphere dotted with yellow and white Vatican flags and the colors of South American countries.

He began the day at the UN General Assembly by offering his vision of a better world in a wide-ranging speech.

Francis touched on the persecution of Christians, the Iran nuclear deal, drug trafficking – “silently killing millions” – and the rights of girls to an education.

The first Latin American pope – who has seen his own country suffer economic crises – called on the UN Security Council and financial lenders to “limit every kind of abuse and usury.”

He also gave his latest passionate plea to protect the environment, as he voiced confidence that a looming UN summit on climate change would reach “effective” agreement in Paris.

The pope offered a strong endorsement of Iran’s agreement with the United States and five other world powers to limit its nuclear program – a deal vehemently opposed by many US lawmakers.

Francis has an avid following even among non-Catholics for his embrace of causes such as climate change and his progressive approach to social issues.

But at the UN, he signalled that the church was not ready to champion transgender rights, an issue of growing importance in the United States as gay equality becomes mainstream.

“We recognise a moral law written into human nature itself, one which includes the natural difference between man and woman and absolute respect for life in all its stages and dimensions,” he said.

Pope Francis has declared he is ready to make it easier for members of the church to secure an annulment of their marriage. Photo: Osservatore Romano/AFP

As the Eagles used to sing, “you can check out any time you like, but you can never leave”.

That is pretty much the way Catholicism has traditionally treated marriage. The Catholic belief is that the union is sacred and indissoluble. The Vatican has for centuries instituted procedures and barriers to make an annulment or a divorce extremely difficult, if not impossible. And so this tough resistance to annulment has, for a long time, been reflected in the marriage laws of such Catholic countries as Ireland and the Philippines.

But in his latest move to bring the conservative church into the 21st century, Pope Francis has declared he is ready to make it easier for members of the church to secure an annulment of their marriage – a move hailed as the most radical reform of its kind in 250 years. This is a most welcome development. It follows this reformist pope’s previous declaration that there is room for gays and lesbians within the church and that clergy should treat women who had abortions more leniently and with greater mercy.

An unhappy marriage has a terrible impact on the couple trapped in it. Loneliness, isolation and even domestic violence are some of the appalling results.

Securing an annulment used to take many years and carried hefty legal fees, but Francis has ruled that the procedure should be free and, in some cases, may be speeded up to within 45 days. He has also instructed bishops to be more welcoming towards divorcees and given them sweeping powers to judge quickly in the most clear-cut cases. In addition, Francis has cancelled a previously mandatory review of an annulment decision by a second tribunal.

Pope Francis is making a valiant effort to modernise the church and to eliminate some of its more rigid and unconscionable rules that have alienated many faithful and outsiders alike.

In doing so, he has shown the human side of the church that is accepting and merciful.